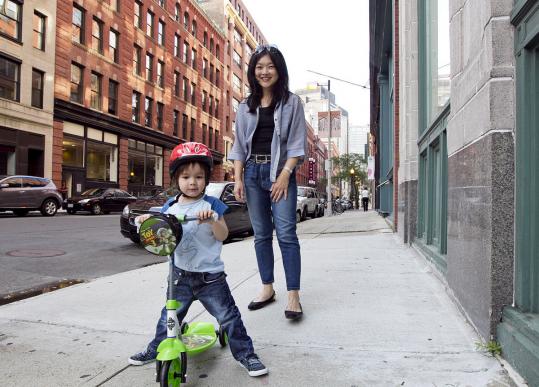 Alfred Porter held his usual afternoon spot on Columbus Avenue, seated in a blue lawn chair in the shadow of the red brick house he has called home for 40 years.

“This here, we call the South End,” Porter, 80, said from his perch a half block west of Massachusetts Avenue.

Steps away on the same sidewalk, Stephanie Schoen, 63, paused. “It’s Roxbury,” she said. At home, Schoen said, she had a Mission Hill parking sticker and has received mail addressed to Roxbury. Her phone bill says Brookline.

Boston is home to long-established but often ill-defined neighborhoods. The city sits on land that has been drained, dammed, filled, flattened, and annexed. Like the earth and tidal flats, neighborhoods have morphed, moved, and been renamed.

The result is what Mayor Thomas Menino calls “a hogmosh of undefined lines.”

Police have one set of districts while the City Council has another. That explains how two neighbors can disagree about whether their block is in Roslindale or West Roxbury. Or why the demarcation between Dorchester and Roxbury may be up for debate.

And good luck trying to get residents to agree on where Allston stops and Brighton starts. (Hint: The border largely follows the ZIP code line, which was drawn to help deliver the mail, not to define a neighborhood.)

Boundaries get fuzzy even in the neighborhood parking program. Call the Transportation Department and ask for a map of parking zones; you’ll find yourself out of luck. None exists.

In fact, the most detailed atlas of Boston neighborhoods originates in Chicago, where a company named Big Stick Maps has charted urban boundaries in cities from coast to coast. After almost two years of research and cursing at Boston’s meandering streets, the firm published an illustrated map in 2003 that identifies 114 neighborhoods.

“Boston took forever,” said Christopher Devane, who founded Big Stick after a barroom bet about how many neighborhoods he could name on Chicago’s neatly laid-out grid. “You guys don’t have a right angle in the city. I think the right angle was invented 200 years after Boston was founded.”

By defining Boston’s neighborhood boundaries on paper, Devane did something that few residents have been brave enough to do. The city has always published vague maps that show general locations of neighborhoods without strict boundaries. Officials knew that if they drew clear borders, people would object, no matter where the lines were drawn.

But in March, the Boston Redevelopment Authority made a new attempt. Spurred by advances in digital technology, the agency published a map to coincide with the latest census data. It included distinct red lines that defined exact boundaries, not for every crossroads and square in the city, but for 25 of the larger areas.

The effort was titled Neighborhoods*. The asterisk warned that the red boundaries were approximate, based on zoning and ZIP codes, and designed for “visualization purposes only.”

That did little to assuage some outrage. One community newspaper wrote that sections of the city were indisputably part of Dorchester, not Roxbury and Mattapan as the map claimed.

That kind of passion can be warranted. Living in a particular neighborhood can have an impact on real estate value and insurance rates. Right or wrong, people make assumptions about sections of the city, associating certain neighborhoods with crime, affluence, a particular race, or sexual orientation.

“I think it does matter,” said Councilor Tito Jackson, whose district is centered in Roxbury but extends a few blocks into the Back Bay and the South End. “There are some definitions [on the 2011 neighborhood map] that just do not work. Mattapan does not begin at Blue Hill Ave. and Columbia Road. There is an identity to neighborhoods, where Dorchester is and where Mattapan is.”

Jackson should know. He bought his parents’ home on Schuyler Street in the Grove Hall section. Jackson believes he lives in Dorchester. “But the March 2011 map says Roxbury,” he said. “My mail comes to me addressed to Roxbury, Dorchester, Boston, and Grove Hall.”

Is the map wrong? Not accord ing to some elders in Grove Hall, who would say they live in Roxbury, Jackson said. Boston’s cartographers knew not everyone would be happy when they published the map last spring.

“We don’t want to be the ones that define a neighborhood,” said Carolyn Stremple Bennett, manager of digital cartography and geographic information systems for the BRA. “There are definite, defined neighborhoods to Boston. And people really identify with their neighborhoods, there’s no doubt about it.

“This was our first stab,” Bennett added, “at trying to look at how it is that people may identify with neighborhoods.”

Soon there may be a better way. The BRA expects to unveil an online mapping tool by the end of the summer that will allow people to draw their own neighborhood boundaries.

Residents will be able to click almost block by block.

That will mean, for example, that a nonprofit in northern Mattapan applying for a grant could pull demographics for the exact community they serve, or an entrepreneur writing a business plan could pinpoint the median income for what he considers Roslindale.

But the new mapping tool still will not answer the existential questions, like whether the border between Roxbury and the South End is Massachusetts Avenue, Melnea Cass Boulevard, or something else entirely.

“It depends who you ask,” said Jay Walsh, director of Boston’s Office of Neighborhood Services, which relies on the city’s antiquated map of wards and precincts, not strictly neighborhoods.

In Dorchester, many longtime residents identify their sense of place by Catholic parish, not neighborhood. But some of that has faded.

“I think it means much less than it used to, for better or for worse,” said Lawrence S. DiCara, a former City Council president who has studied political maps since he was a boy in St. Gregory’s, part of Dorchester also known as Lower Mills.

“Growing up,” DiCara remembered, “I could close my eyes and listen to people talk and tell if they were from Charlestown or East Boston because they talked differently.”

These days, no accent will scream Leather District, a neighborhood consisting of just three streets between South Station and Chinatown. But residents there remain fiercely proud of its identity.

“There’s a sense of home here,” said Virna Chan, 41, standing on a street shaded by hulking red-brick buildings that a century ago housed tanneries and shoe factories. “It’s not Chinatown. It’s not the Financial District. It’s definitely not Back Bay. It’s hip. It’s young.”

But there’s more to it than that, said John Shope as he walked down a brick sidewalk in Bay Village, another of the city’s lesser-known sections.

“A neighborhood sort of breaks the city down into manageable units,” Shope said, paraphrasing the urban theorist Jane Jacobs. “It’s an antidote to the overwhelming anonymity of the city.”