THIS STORY HAS BEEN FORMATTED FOR EASY PRINTING
GlobeWatch

Looking for direction to Storrow Drive 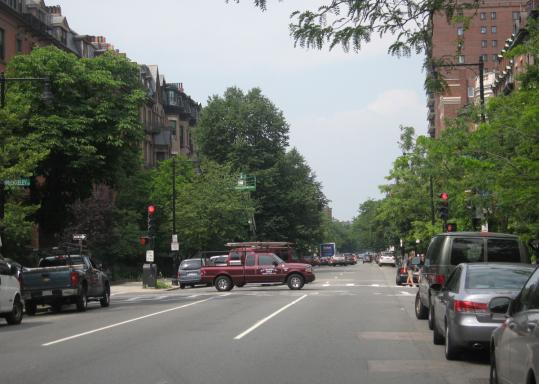 Leaves on Beacon Street obscured street signs indicating the entrance to Storrow Drive was the next right, on Berkeley Street, so drivers could not see them until the last minute. (Christina Pazzanese for The Boston Globe)
By Christina Pazzanese Globe Correspondent / July 18, 2011

Reader Charles Barr of Waltham said he has been itching to ask city transportation officials why there are no signs to assist drivers trying to find the entrance to Storrow Drive at the corner of Berkeley and Beacon streets in Back Bay.

“I can’t remember the number of times in decades that I drove past this spot, missing the huge sign which has always been obscured by foliage, until I finally memorized that Berkeley is the street where I must turn right in order to access Storrow westbound,” Barr writes in an e-mail, making it a point to note that he is a longtime native.

“I wonder how many (thousands?) of frustrated tourists looking for the ramp to Storrow West have missed this sign over the years,” he wrote. “Driving westerly on Beacon Street, you don’t see it until you are practically under the sign, not enough time to prepare for that right turn at Berkeley.”

Despite Barr’s recollection of a huge sign, a Globe reporter twice visited the area last week and found no such signs on either Berkeley Street or Beacon Street. Two overhead signs were posted across Storrow Drive partly visible only to the drivers on Berkeley Street, but they sat low and were often obscured by large, idling vehicles waiting for the light at Beacon Street to change. Those approaching the entrance from Beacon Street were left to look for standard city-issued street signs to find the turn at Berkeley. But those were not very helpful because leafy branches from adjacent street trees obscured them until drivers were almost directly underneath.

The state and city respond
The signs for Storrow Drive at Beacon and Berkeley streets date back to the late 1970s, when the Metropolitan District Commission last did a comprehensive signing program for the Charles River Basin, said Department of Conservation and Recreation spokeswoman S.J. Port in an email. But after hearing from GlobeWatch, the department sent engineers to check on the signs last week, and they discovered they are no longer there. Port said it is unclear how long they have been missing. New signs are now “in the queue” to be replaced, she said, although she could not provide an estimate of how long it will take to install them.

James Mansfield, a Boston Transportation Department spokesman, said he would alert the city’s Parks Department, which is responsible for pruning street trees, about the obscured Berkeley Street signs.

GlobeWatch runs every other Monday. Readers with problems they would like addressed can send an e-mail message to globewatch@globe.com.