New tool for police is good with faces 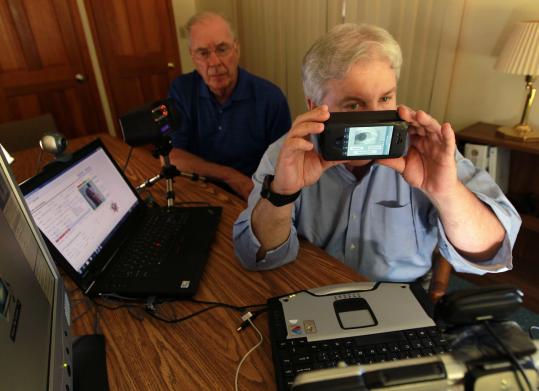 Sheriff’s departments across Massachusetts are using facial recognition technology to build a database of every suspect they book, an electronic lineup that local police could soon tap remotely with a handheld device attached to a smartphone.

The device, made by a Plymouth firm called BI2 Technologies, weighs about 12 ounces and can scan an iris, take a fingerprint, or assess a face and then immediately check someone’s identity against national and local databases.

“It fits in the palm of your hand; it’s completely noninvasive,’’ said Brockton Police Chief William Conlon, whose department tested a prototype of the device and who hopes to acquire one permanently.

Essex County, the first in the state to adopt the facial recognition program in booking suspects more than five years ago, has already assembled a database of more than 70,000 photos and allows detectives from around the county to use it, said Sheriff Frank G. Cousins Jr. The handheld device, known as the Mobile Offender Recognition and Information System, would tap into that database and other national collections to help police identify suspects who are offering fake identities or who are wanted on other charges.

A number of questions are unresolved, such as how long the images of suspects will be stored, whether they will be shared with the FBI, and what happens to the images of people who are cleared of charges.

“There’s simply no good reason, in our view, to create detailed dossiers on every American resident,’’ said Kade Crockford of the American Civil Liberties Union of Massachusetts. “And increasingly it appears as if all of these surveillance programs and technological programs are doing just that. We want to make sure there are proper protections around these technologies, so they’re not abused.’’

While facial recognition technology is increasingly being used on Facebook, in photo troves on private computers, and even in law enforcement, the potential for its handheld use - possibly from a distance, without the subject’s knowledge - is prompting additional concern. Is the scanning of an iris equivalent to a search that requires a warrant? Will police be permitted to search faces in crowds for wanted suspects? Who will have access to information gained through the system?

“I’m not an advocate of using facial recognition to scan a crowd looking for a convict like at a sporting event,’’ Cousins said. “I don’t think that’s necessary. I wouldn’t want to see that application used for that.’’

But whether it would be allowed remains unclear.

“Our laws have not kept up with technology,’’ said ACLU staff attorney Laura Rotolo. She added that iris scans might be legally comparable to fingerprints, but the circumstances are different because a person must be brought to a station to be fingerprinted.

“When you’re talking about the ability to take an iris scan with a small device, all of a sudden you don’t have that barrier,’’ she said. “We just don’t have laws or standards about when that can happen.’’

The Massachusetts Sheriffs’ Association, an independent state agency, works with all 14 sheriff departments in Massachusetts and won a Department of Justice grant that has already provided 10 sheriffs departments with the technology to create facial recognition databases.

“When we can get the network fully established in terms of police department partnerships across the state, police departments will be able to get a much better data record of suspects,’’ said James F. Walsh, executive director of the Massachusetts Sheriffs’ Association. “It’s one more resource.’’

“We’re concerned that it’s not just going to be local, but sent to the FBI, which is building this giant database that’s going to include facial recognition, iris scan, voice recognition, and fingerprints,’’ Rotolo said. “We’re concerned and interested to find out whether the information is going to stay locally or go to the state and federal government.’’

Police and law enforcement officials say they look at facial recognition technology as another tool to help them solve crimes, particularly when identities are false or shaky.

For instance, security specialists said early this year that facial recognition technology at the airport might have stopped a man suspected of killing a Brockton woman and her young child from escaping the country at New York’s John F. Kennedy Airport, with the valid passport of another man.

“We wouldn’t ask if we didn’t have reasonable and articulable suspicion that they either had just committed a crime or were about to commit a crime,’’ said Conlon, Brockton’s police chief. “We’re not going to just stop people on the street and say, ‘Hey, come here, who are you?’ ’’

For now, the application is being used to scan images of those being processed at correctional facilities and booking stations.

Cousins pointed out that facial recognition technology remains imperfect, particularly because it requires the subject to remain completely still.

And, he added, it is used as a tool, leading to interviews. “You have to go do police work like always,’’ he said.

He said that some constraints are built into the new, mobile system: Images checked with the handheld devices cannot be stored in it.

“You can’t go out on the street and get somebody and put them in the system,’’ he said. “I think we’re as sensitive about privacy and the correct policy for this as anyone else.’’

He also said the state is going to have to make decisions about what use is appropriate.

The state Department of Public Safety would not comment on the program and has not even decided whether to let the program gain access to the state-controlled database of fingerprints.

“The tough part is really coming to those decisions,’’ Mullin said. “We just provide the technology and the safeguards to make sure it can’t be misused.’’