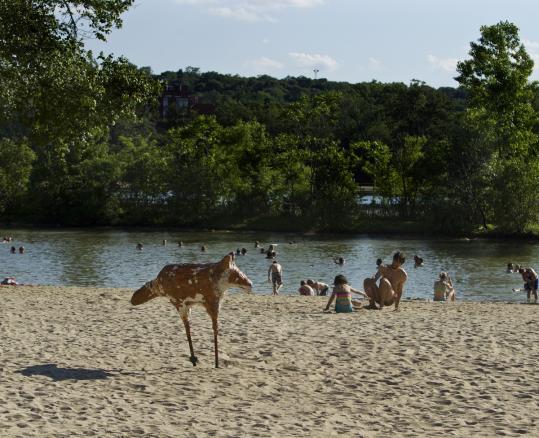 So far, the coyote decoy has kept messy Canada geese away from the Arlington Reservoir’s shores, probably because it is moved around the beach periodically. “Nothing has worked as well as this has,’’ said Kenneth Hughes, a reservoir supervisor. (Matthew J. Lee/ Globe Staff)
By Brian MacQuarrie Globe Staff / July 13, 2011

Arlington Reservoir has long been a popular destination for heat-beating swimmers and a gaggle of sand-soiling, sandwich-swiping Canada geese. But this summer, thanks to a 4-foot coyote, grateful bathers have the beach all to themselves.

The coyote - an on-the-fly amalgamation of twisted chicken wire, hardened foam, and a coat of brownish paint - was put together by Claudia Hughes, a lifelong Arlington resident who saw a cardboard cutout of a coyote on a Cape Cod golf course last summer and figured she could build something better.

“I thought there had to be some way to make those geese go away, so I went online to see what a coyote looks like,’’ said Hughes, an art school graduate. “I guess it’s working out pretty good, but it really is pretty ugly if you look at it.’’

Coyote decoys have been used for about a decade to clear messy Canada geese from parks, ponds, backyards, and public spaces. But the make-believe canines have played to mixed reviews by their human handlers.

“When they first came out, they were very effective,’’ said H.W. Heusmann, a waterfowl biologist for the state Division of Fisheries and Wildlife. “But people being people, they’re a little bit lazy, and they leave them in the same place. The geese would get a little closer, and a little closer, and eventually use them for shade.’’

So far, that has not happened at Reservoir Beach, where the coyote, supported by metal poles, was planted in the sand a few days before the summer season opened in mid-June.

“We used to spend a lot of time cleaning up their mess,’’ said Kenneth Hughes, who is a reservoir supervisor, retired police lieutenant, and husband to the fledgling coyote sculptor. “Nothing has worked as well as this has.’’

Unlike other places where decoys have been tried and failed, the Arlington Reservoir coyote, which has yet to receive a name, is moved around the beach. The depiction is realistic enough that Joe Connelly, the town recreation director, mistook the decoy for the real thing when Claudia Hughes placed it on a ballfield pitcher’s mound as a test.

That is when its creator knew she had a winner. “The reaction was exactly what we had hoped for - fear,’’ Hughes recalled with a chuckle.

One young bather, however, was not quite sure what he was seeing and decided the decoy was a piñata. The child lopped off the tail, she said, but the sculpture was made whole again with duct tape.

Despite decoys, fences, dogs, and a Massachusetts hunting season that harvests about 12,000 of the birds each year, Heusmann said Canada geese are now part of the state ecosystem. In 2005, when the last official estimate was made, Massachusetts had 39,500 of them.

“The problem is people are still feeding them, and they are prolific, and it’s going to take a long time to reduce them to a tolerable level,’’ Heusmann said. “But we do believe we have arrested their growth.’’

Ironically, many of the geese that call Massachusetts home - about 80 percent of the population are year-round residents - are descendants of birds that were introduced to the state as live decoys by 19th-century hunters, Heusmann said.

“They would train the geese to go and call to wild birds flying through,’’ Heusmann said. “A lot of the guys used to treat them as pets, but they didn’t want to feed them, so they basically let them go.’’

As a result, Claudia Hughes and others have been left to deal with the aftermathof the geese. She is already at work on new and improved additions to her menagerie.

“It’s so tickling to have this thing work,’’ Hughes said. “I just wanted to give back to the town and help out as best I could.’’