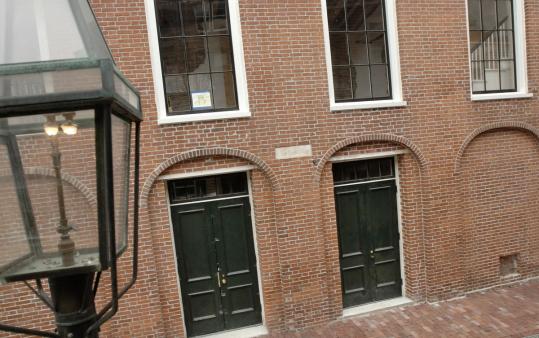 The African Meeting House on Joy Street on Beacon Hill is one of the sites mentioned in “Walking Tours of Civil War Boston.’’ It has served as a church, school, and a meeting place. (Josh Reynolds for The Boston Globe)
By Martine Powers Globe Correspondent / July 11, 2011

For half a century, there have been two trails in Boston.

On Beacon Hill, the Black Heritage Trail honors a less celebrated tale: African-American abolitionists and runaway slaves who struggled for their own liberty.

Now, the Freedom Trail Foundation, the organization that preserves that route, has published a guidebook that highlights Boston’s role in the lead-up to the Civil War - and the people who preside over the Black Heritage Trail are not pleased. They maintain that the new 64-page guidebook gives short shrift to institutions that for decades have ventured to educate visitors about Boston’s little-known black history.

The ire sparked by the guidebook sheds light on the charged sentiments that continue to define the delicate task of curating Boston’s black history.

“I think that the publication . . . is diminished and deficient for including only a glancing reference to the Black Heritage Trail and no reference to several specialized tours that have been done by the Boston African American National Historic Site for years,’’ said Marty Blatt, chief of cultural resources at Boston National Historical Park.

“Walking Tours of Civil War Boston’’ went on sale in June for $9 at www.civilwarboston.org and at souvenir shops. It was released to coincide with the 150th anniversary of the beginning of the Civil War.

“My hope, of course, is that this book will change that perception that Boston only has history from the Revolutionary War,’’ said Barbara Berenson, a senior attorney at the Massachusetts Supreme Judicial Court and the book’s lead author. “People who know history know that all these things are here, but there really hasn’t been a user-friendly way to explore this history.’’

The book outlines four routes that pass sites significant to the Civil War’s start, such as Faneuil Hall, where politicians debated the future of slavery, and the African Meeting House, once the city’s first black church.

Berenson called the book a labor of love that she researched and wrote after work and on weekends. In December, she approached the Freedom Trail Foundation.

“One of the reasons why this project was so fascinating to me was that so many of these people, both black and white, were so motivated by the heroes and patriots of the American Revolution,’’ she said.

Berenson asked Blatt to read the guidebook before publication. His major concern with the initial draft was introductory text stating that there were no tours on abolitionist history in Boston.

“That jumped out at me, because that’s really inaccurate,’’ Blatt said.

In the published version of the guidebook that text was removed, and two phrases mentioning the Black Heritage Trail were added. Blatt believes that is not enough - especially in a city with several institutions devoted to chronicling the African-American experience.

The Museum of African American History has fought for the recognition of black Bostonians in the city’s cultural tourism since opening in 1967. When the National Park Service established the Boston African American National Historic Site, it was considered a coup for the city’s black community. Now, park rangers conduct free daily tours on topics such as black women in 19th century Beacon Hill, the abolitionist John Brown, and the local history of the Underground Railroad.

“I tried to suggest in my comments that there was an egregious problem with the notion that this publication was so needed because there was nothing that dealt with Civil War sites in Boston,’’ Blatt said.

Beverly Morgan-Welch, executive director of the Museum of African American History on Beacon Hill, shook her head when she saw a copy of the guidebook. She declined to comment on its quality, stating instead that “the hard work of documenting these historic places and preserving them is the work we perform today. The museum is here to tell an authentic, scholarly, and engaging story.’’

Mimi La Camera, president of the Freedom Trail Foundation, said that is also what her organization hopes to achieve. Established in 1964, the foundation conducts walking tours that focus on different facets of Revolutionary War-era Boston, including a Pirates and tour and a Historic Pub Crawl. In February, the organization conducts an African-American Patriots tour in honor of Black History Month. Guides are costumed in Colonial dress.

“This guidebook really fits into our mission to enrich the experience of learning about history, to make it fun, and to tell stories that are not very often told,’’ La Camera said.

Though the Beacon Hill route in “Walking Tours of Civil War Boston’’ incorporates most of the stops on the Black Heritage Trail, other routes in the guidebook focus on Civil War statues and monuments in Government Center and Back Bay, as well as Civil War naval sites in Boston Harbor. Berenson has given a guided tour of one of her walking routes to Boston teachers and said she might give more in the future.

Linda Heywood, director of African-American studies at Boston University, said the guidebook fails to acknowledge the importance of the Black Heritage Trail in raising the profile of Boston’s black history.

“It seems to have an exploitative end to it,’’ she said.

Heywood said it is unfair that the Freedom Trail Foundation earns money from the book’s sale, but does not use that money to help preserve the African-American heritage sites it includes. It was shocking, she said, that the guidebook was produced without partnership with the Museum of African American History.

La Camera said her organization attempted to contact the museum before publishing the guidebook but did not get a response. Morgan-Welch, of the museum, declined to comment on La Camera’s assertion.

Concerns have also been raised about the guidebook’s cover, which features a white man, a black man, and a white boy wearing Union Army uniforms and standing at attention in front of the Boston Common memorial to Robert Gould Shaw and the Massachusetts 54th Regiment, the unit depicted in the 1989 movie “Glory.’’

Antonia Bakara, a National Park Service ranger who conducts tours of the Black Heritage Trail, said the photograph was misleading because it suggests that whites and blacks fought side by side during the war. The 54th Regiment was an all-black unit led by a white officer.

“It’s a disservice to history that people knowingly portray it incorrectly,’’ Bakara said. “Instead of making up fairy tales, they should tell the real story.’’

Inside, the book explains the history of the unit. Jayne Gordon, director of education and public programs at the Massachusetts Historical Society and one of the specialists who vetted the book, said she did not believe the photograph suggested the Union Army was integrated.

“That didn’t occur to me,’’ Gordon said. “To me, the photo was just linking the past and present in a new way.’’

For Berenson, the idea that people would take offense at the guidebook, rather than delight in its inclusiveness, is hard to understand. If the task of curating Boston’s black history currently falls on the shoulders of only a couple of organizations, she said, more groups must take on the task of putting black faces and black stories into the public eye.

“I think my guidebook,’’ she said, “moves African-Americans to the central role they deserve.’’