But seriously . . . the goal is comedians’ hall of fame 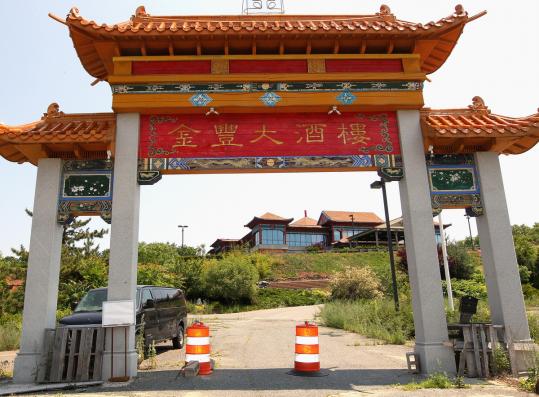 SAUGUS - Heard the one about the guy from Las Vegas who was driving up Route 1 and thought he had found the Forbidden City?

The old Weylu’s, the giant Chinese restaurant built to replicate the Imperial Palace, would be a great spot for the National Comedians Hall of Fame, he thought. After all, Route 1 in Saugus has always given people a little chuckle. It has an orange dinosaur, a neon cactus, and a leaning tower of pizza. Why not add Charlie Chaplin’s hat, Austin Powers’s suit, and a Howdy Doody puppet?

“It’s an iconic building,’’ Matt Adragna, 52, said of the long-closed restaurant. “It just seems to be a fitting place for us.’’

But is he joking? Maybe Niagara Falls, that old, sweet honeymoon spot, would be a better match? Or Jamestown, N.Y., the hometown of comedy queen Lucille Ball?

The upstate New York cities are also in the running for the nonprofit museum proposed by Adragna and his business partner, Tony Belmont of Florida.

Three days after the May 11 announcement of a $50 million plan to remake the old Weylu’s into the hall of fame, Belmont made a pitch to open the museum on Main Street in Niagara Falls, according to Mayor Paul Dyson of that city.

“We listened to their proposal,’’ Dyson said in a telephone interview. “We told them we were interested in hearing more about it.’’

Andrew Bisignani, town manager in Saugus, is skeptical about the proposal. The 65,000-square-foot building would be turned into exhibit space, classrooms, a 300-seat auditorium, a gift shop, and a restaurant.

But since the announcement was made May 11 at Weylu’s to a group of local and state officials, there has been little discussion, Bisignani said.

“I’m not so sure it’s a viable project,’’ he said. “I haven’t heard much since that day, except for some e-mails saying that they have offers from Buffalo, Pennsylvania, and so on. I told him, ‘Do what you have to do.’ Saugus can’t match that.’’

Over the past 20 or so years, Adragna and Belmont have been making the circuit, pitching the idea of a hall of fame and museum to cities across the country. A meeting in Boston six years ago went nowhere, said Adragna.

Buffalo, Baltimore, and Philadelphia have also been talked about. In 2007, a temporary venue, named the National Comedy Hall of Fame, opened in Madeira Beach, Fla., a tiny community near Clearwater.

“It was a small location that we used only as a test site for one summer,’’ Adragna said. “The response was overwhelming, but it was just too small.’’

The duo initially set their sights on Las Vegas, where Adragna worked as a marketing professional. “We were looking to build on the strip,’’ he said. “We had some options, but each one fell through. When the economy crashed in 2008, we decided to look elsewhere.’’

So Adragna rented a Dodge Neon to scout locations on the East Coast. He was headed for Maine when he spotted the deserted Chinese restaurant overlooking Route 1. “I remembered that it was Weylu’s,’’ said Adragna, whose wife is from East Boston. “It’s changed quite a bit, but the site is still beautiful.’’

The three-story restaurant, built at a cost of $13 million, has a troubled history. While it opened to great promise in 1989, the mammoth restaurant soon ran into trouble.

A stubborn recession in the early 1990s hurt business almost from the start. The restaurant fell behind on tax payments to the town, mortgage payments to the bank, and employment taxes to the state.

The Bank of China eventually foreclosed, and founder Rick Chang pleaded guilty to 19 counts of failing to make employer tax contributions. He was sentenced to 20 days in jail. Weylu’s closed in 1998, after the bankruptcy court ordered it liquidated.

In 2002, Bank of China sold the restaurant, which sits on 10.5 acres, to a New York-based Chinese restaurant group. Since that year, four different Asian-themed restaurants and nightclubs have opened and closed at the site.

Since then, once-opulent Weylu’s has been like a white elephant. Broken glass, cracked plaster, and rubbish scar the inside, where patrons were once served by staff dressed in tuxedos. Outside, the giant pagoda that welcomed guests at the foot of the driveway is chipped and faded. Tall grass and cracked pavement spoils the formerly well-groomed grounds.

“It’s really a shame,’’ said Paul Rupp, economic development consultant for Saugus. “It was very, very high-end there. . . . It was built for a singular purpose. It’s not the type of structure that just anything could go in there.’’

Adragna said he has signed a purchase-and-sale agreement to buy the property for $6.5 million from Golden Mountain LLC of New York, the current owner. The town assesses the value of the restaurant and land at $2.5 million, according to town records.

Golden Mountain also owes the town $181,000 in real estate taxes and in fees owed to the Fire Department for providing a fire watch after a series of false alarms, said Wendy Hatch, the town accountant.

Adragna said the property needs a new roof, estimated to cost more than $150,000. That has become a sticking point in negotiations, he said.

“We had to renegotiate the pricing because of the roof,’’ Adragna said. “The insulation is wet, and the wood is rotting. It can’t be repaired; it must be replaced.’’

And then, of course, there are the talks with Niagara Falls and Jamestown.

“We do have a very attractive offer from the city of Niagara Falls,’’ Adragna said. “It’s an offer, but it hasn’t been agreed to.’’

But Dyson, the Niagara Falls mayor, said the city has made no offer of financial assistance. He and other officials did provide Adragna and Belmont with letters of intent stating their interest in working with them, he said.

“We basically just said it’s an interesting idea that we’ll talk to them about,’’ Dyson said.

Their proposal calls for the city of Niagara Falls to purchase a building on Main Street, transform it into a museum, and lease it to the National Comedy Hall of Fame for five years, Dyson said.

After five years, the museum would be turned over to the city, he added.

Dyson said he would look at a feasibility study or business plan, but added, “We have no interest and are in no position to run a Comedy Hall of Fame.’’

Saugus - where finances are so tight that voters had to approve a one-time tax increase to pay last winter’s $1 million snow removal deficit - has not been approached about financing the attraction, Bisignani said.

“We are not in any sort of position to pledge any kind of financial resources,’’ he said.

The nonprofit says it has thousands of pieces of comedy memorabilia stored in a Florida warehouse, just waiting to be laughed at. Minnie Pearl was the first star inducted into the hall, during a ceremony in Nashville in 1994 attended by George H.W. Bush, the former president, Adragna said.

Since then, A-list comedians, including Carol Burnett and Bill Cosby, have been inducted, along with legends such as Lucille Ball and Jonathan Winters, he added.

“Our collection is estimated in the multimillion-dollar range,’’ Adragna said, adding that they recently acquired new items in an auction by singer Debbie Reynolds.

But finding a permanent home has not been easy. Investors will not give money until a site is acquired, he said. Banks want to see solid backing before loaning money. Their website - www.comedianshalloffame.org, which shows a picture of the old Weylu’s with an opening date of 2012 - asks comedy fans to make donations to a building campaign.

Adragna is also trying to sell corporate sponsorships, but that effort has hit a snag. A brochure for the Saugus site listed and Wireless as sponsors, but spokesmen for each company said the firms are not sponsors and asked that their logos be removed.

Adragna said the logos have been removed. “It was a mistake on my part,’’ he said. “We had received some small grant money from a Bank of America branch in Las Vegas and a Verizon store there.

“I thought we could use the logos. Once they told us not to use them, I stopped.’’

He said he is now focused on finding a fitting spot for his hall of fame.

“I like the Weylu’s building a lot,’’ Adragna said, adding that he recently moved to Boston. “I want to get this deal done. I don’t care if people laugh at me. It’s a viable concept.’’