A Boston police officer at the center of one of the most notorious police brutality cases in city history used unreasonable force while arresting a man in the North End in 2009, then lied about the episode to department investigators, according to an Internal Affairs Division report obtained by the Globe.

As a result, Officer David C. Williams has been placed on paid administrative leave, the Boston Police Department said, and could lose his job under Police Commissioner Edward F. Davis’s nearly 19-month-old policy of dismissing officers who lie in the line of duty, to internal affairs investigators, or in court. Williams is appealing the finding, and a hearing is scheduled for later this month.

Williams was fired from the force in 1999 after being implicated in the racially charged 1995 beating of undercover police officer Michael Cox, then reinstated with nearly $550,000 in back pay after a civil service arbitration in 2005.

Williams’s attorney, Douglas I. Louison, insisted his client told the truth about the 2009 North End arrest.

Michael P. O’Brien, a 30-year-old Middlesex County corrections officer, filed a civilian complaint against Williams and five other officers who arrested him on Hanover Street on March 16, 2009. O’Brien said that Williams drove his head into the sidewalk and choked him after he began recording Williams and his partner with a cellphone as the two officers responded to a minor traffic accident.

Despite the findings against Williams, O’Brien said it was “a sickening feeling’’ to read the Internal Affairs Division report clearing officers of other charges.

“It was like a kick in the gut,’’ he said. “I was expecting to be exonerated. I was expecting them to come out to say: ‘This is a lie. These charges aren’t true. This arrest was false.’ As happy as I am they’re charging him with something, it’s tough. It’s a knock at your credibility as a person.’’

O’Brien, of Methuen, a former National Guardsman, has filed a federal lawsuit against Williams, Nguyen, and the Boston Police Department. He alleges that he suffers from debilitating headaches and dizziness as a result of the arrest, and that his career as a correction officer and his aspirations to join the Army’s Special Forces have been “flipped upside down.’’

Davis was not available to be interviewed about the Internal Affairs Division report. Asked if Williams should be fired, Police Department spokeswoman Elaine Driscoll said it was inappropriate to discuss the officer’s possible discipline.

“Discipline could result in a number of things, including termination,’’ Driscoll said. “The investigation was fair and methodical. Every officer is entitled to due process.’’

Asked if this is a test of Davis’s highly touted antilying policy, Driscoll would only say: “The charges sustained are very serious, and the police commissioner will treat them as such.’’

O’Brien was arrested after Williams and Nguyen responded to a fender-bender on Hanover St. According to police and court documents, O’Brien and two friends were in a car that backed down Hanover Street and clipped a double-parked vehicle. In his incident report, Williams wrote that O’Brien “became very unruly’’ and “pushed Officer Nguyen.’’

But according to the Internal Affairs report obtained by the Globe, Williams, who is 6-foot-3 and 242 pounds, used an “unreasonable amount of force’’ to arrest O’Brien, who was 5-foot-9 and 160 pounds at the time. The report also found that Williams, 48, was “untruthful in his statements’’ when interviewed by department investigators.

The Internal Affairs Division ruled that Nguyen, 33, used “reasonable and proper force’’ to arrest O’Brien and that Nguyen properly arrested O’Brien for disorderly conduct. The report also found that while Nguyen directed profanity at O’Brien and an unnamed witness to the arrest, investigators were “unable to prove or disprove’’ a violation of department rules mandating respectful treatment of civilians.

O’Brien said he did not see the other four officers who took part in the arrest and does not know how they became part of the investigation.

The notice of findings, signed by Superintendent Kenneth Fong of the Police Department’s Bureau of Professional Standards, provides no details about how investigators came to their conclusions, nor does it shed light on how Williams was untruthful during the internal investigation.

O’Brien and his attorney, Howard Friedman, said he could not discuss the case or his lawsuit because the information is being kept secret at the urging of the police under a court order.

But O’Brien was willing to say what punishment he believes Williams deserves. “He should be fired; he should have been fired a long time ago,’’ O’Brien said. “I was astonished that someone with such a history could be working on the Police Department.’’

Under department rules, Williams could accept the internal affairs findings and submit to Davis’s discipline. However, Williams is challenging the findings, which means the department has to conduct an administrative hearing before the commissioner or his designee. According to the department’s rules and procedures, any recommendations by the hearing board will not be binding on the police commissioner.

Williams, who joined the department in 1991, was among a group of officers found responsible for the vicious 1995 beating of a plainclothes officer, Michael Cox. At the time, Williams and the others said they mistook Cox, who is black, for a murder suspect they were chasing. Cox was nearly beaten to death on a dead-end street in Mattapan.

Williams and two other officers were fired for their role in the episode, although none were criminally charged. The Boston Police Department took Williams back after a civil service arbitrator ruled he was dismissed without just cause.

Cox, now a deputy police superintendent, sued the city and won $817,000. He later sued Williams after Williams was reinstated and reached an out-of-court settlement with him.

As part of his lawsuit, filed in United States District Court, O’Brien alleges that the department allowed Williams to patrol Boston’s streets despite having a “reputation as an aggressive officer’’ who had filed false police reports before.

O’Brien says that Williams choked him until his airway was cut off. He said that he suffered a brain injury during the arrest and that the chronic dizziness and headaches that have resulted undermined his job at the Middlesex sheriff’s office.

O’Brien asserts that police investigators let his complaint against Williams sit for nearly a year before even starting their probe. “I don’t have a lot of faith in their disciplinary actions,’’ he said. “I’ll never trust a City of Boston police officer again in my life.’’

O’Brien is appealing the department’s exoneration of Nguyen and the other four officers to the three-member Community Ombudsman Oversight Panel. The panel, created in 2007, is separate from the Police Department and hears appeals of serious police misconduct allegations. The panel can overturn findings and order a new investigation, but the police commissioner has final power to overrule the ombudsman panel.

As the Globe reported June 22, the panel is in limbo. It has not met since November, the terms of the members have expired, and new panelists are awaiting appointment by Mayor Thomas M. Menino.

O’Brien could also be asked to testify against Williams at the officer’s administrative hearing, putting an alleged victim in a position to help Boston police fire an officer even as he sues the department over that officer’s conduct.

It would also mean coming into Boston, something he avoids since his arrest. He would also have to sit in a room full of Boston police officers, but says it would be worth it.

“I look forward to it to finally get some justice,’’ O’Brien said. “Guys like this shouldn’t be walking around with a badge and a gun. If it’s the only way to help to do that, I guess it’s good.’’ 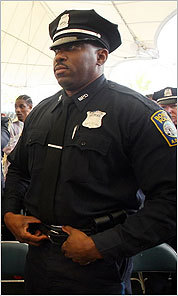 (Globe Staff Photo / John Tlumacki) Officer David Williams was implicated in the 1995 beating of a plainclothes Boston police officer.
Your comment is subject to the rules of our Posting Policy
This comment may appear on your public profile. Public Profile FAQ