Healey a familiar face in the inner circle 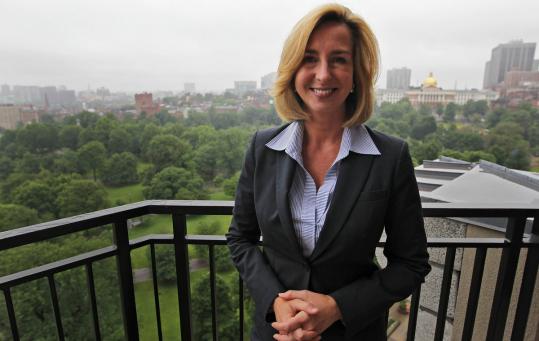 In 2002, Kerry Healey helped persuade Mitt Romney to run for governor. He eventually picked her as his running mate. (Jessey Dearing for The Boston Globe)
By Matt Viser Globe Staff / July 8, 2011

During Mitt Romney’s previous presidential campaign, he took steps to distance himself from Massachusetts, using the state as the butt of jokes as he traveled the country. His lieutenant governor, Kerry Healey, had just finished an unsuccessful campaign for governor in which Romney - unpopular in the state and wrapping up his four-year term - rarely appeared with her in public.

At times, the two former partners could not seem more publicly distant.

Now, as Romney begins his second presidential bid, his former companion at the State House is playing a broad role in his small coterie of trusted advisers. Earlier this year, Healey was in the group traveling with Romney to Afghanistan, Israel, Jordan, and the United Arab Emirates. She has helped Romney on issues around Afghanistan and foreign policy, areas she has taken an interest in after leaving office, and she is also one of about a dozen of his national finance cochairs.

In the acknowledgements of his book, “No Apology,’’ Healey is named second behind only Romney’s wife, Ann, for providing “her characteristic expert corrections and improvements.’’

“He’s very relaxed; he’s absolutely himself this time,’’ Healey said recently over breakfast in downtown Boston. “It’s another advantage of having run before. What’s the worst that could happen? You can lose, right? So you should be yourself, you should be comfortable in your own skin, and you should talk about the things you really care about.’’

Healey, who was once Romney’s liaison to municipal officials in Massachusetts, earned a doctorate from Trinity College in Dublin, where she wrote on human rights in Ireland and the impact of international law on the interpretation of those rights.

In recent years, she has been working on a public-private partnership run through the State Department that aims to train lawyers and judges in Afghanistan.

“She’s one of his most trusted confidantes,’’ said Mitchell Reiss, a former diplomat and one of Romney’s foreign policy advisers. “She is wearing many hats right now. She’s traveling with the governor. She’s on foreign policy calls. She’s developing policy papers where she has an expertise. She’s a five-tool player.’’

Romney and Healey’s relationship dates to 2002 when Healey, as the new chairwoman of the Massachusetts GOP, flew to Utah on a quiet mission to persuade Romney to come back and run for governor after he finished running the Winter Olympics.

Romney did, and then picked Healey as his running mate. She was so little-known that even he called her “Sherry’’ on a radio show. But Romney and his advisers helped her defeat another lieutenant governor candidate, Jim Rappaport. Romney’s son Tagg was her campaign manager.

But during her 2006 gubernatorial campaign, Romney had his sights on his first presidential run. He had been campaigning around the country, trying to cater to social conservative voters and often telling jokes about his home state’s liberal reputation. Partly as a result, he was viewed unfavorably by 54 percent of Massachusetts voters.

His first full day campaigning with Healey did not come until the day before the election.

Since losing her gubernatorial bid to Deval Patrick, Healey has generally stayed out of the public eye.

“I don’t think it’s really good once you’ve lost an election to sit around, watch your former opponent, and swipe at them,’’ she said.

Healey did say that she is considering a run for office in Massachusetts in about two years.

“I have spent a ton of time with my kids these past four or five years. It’s been wonderful,’’ she said. “But I do hope, when they’re happily off in college, that I could perhaps run for office again.’’

She would not say which office she would pursue.

But there is at least one thing that could end up derailing her plans to run for office.

When asked if she would want a position in a Romney administration, she smiled. “Something?’’ she said. “Yes. I have no idea what. That’s way too far down the line.’’