Man hospitalized was a reenactor in Norwood 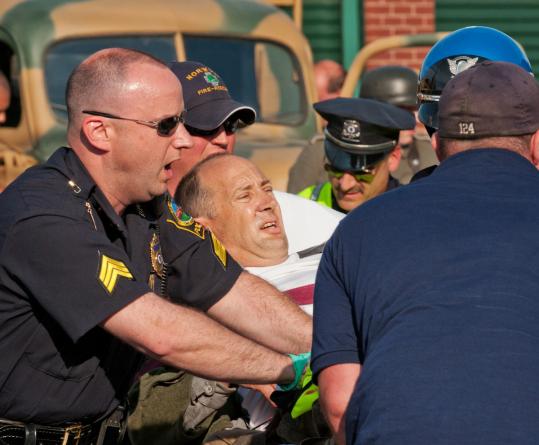 The cannon misfired, and during recoil a piece of metal shot out and hit a reenactor, Kevin Roche, in the thigh, according to rescue personnel and town officials. His injuries were not life-threatening.

Photographer Thomas Lydon said the incident occurred at about 6:15 p.m. on Washington Street near the Chapel Street bridge. As the reenactors advanced, with guns going off, Lydon said he noticed police and members of the crowd grow serious and rush to a man on the ground.

“It appeared to be a little more than a reenactment,’’ Lydon said.

The man, identified by his brother and a hospital spokeswoman, was treated at the scene by a police officer and bystanders who took off their T-shirts to help stanch the bleeding before paramedics arrived. Roche was brought to Norwood Hospital.

Chris Pittman, a member of the group, described the cannon as a noise-making device that is unable to shoot live ammunition. He said it has never malfunctioned in the 10 years that its been used.

“We were all really surprised,’’ said Pittman. “We’ve fired this cannon thousands of times with absolutely no malfunction.’’

Responders initially thought the victim’s femoral artery was hit, but it was determined at the hospital that the injury was not as serious as feared, according to Norwood police spokesman Kevin Grasso.

Roche was conscious and in good spirits during the ambulance ride, said George Morrice, spokesman for the Norwood Fire Department.

As part of planning for the parade, organizers met with police and Department of Public Works employees to go over safety precautions.

Cooper said the town’s chief concern was to keep spectators at a safe distance.

He said that sidewalks along the route were closed to spectators.

“Nobody that I’ve talked to since this happened can ever recall this happening,’’ said Cooper.