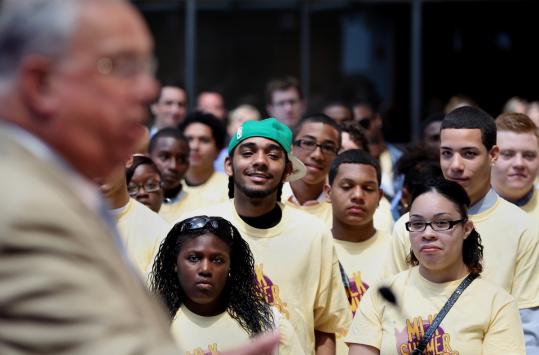 There is the grief, rage, and retaliation to quell and the jobs, camps, and activities - deterrents advocates say help keep the crisis at bay - to strengthen and muster.

“You have to keep things as solid as you can for all your young people, but not try to act like it hasn’t happened,’’ said Mariama White-Hammond, executive director of Project HIP-HOP, a Roxbury-based youth-empowerment and civil-rights organization.

A rash of shootings, stabbings, and killings in Boston in recent weeks, including 13 people shot and stabbed in five hours during the holiday weekend, has shocked and frustrated the city and put street workers and community members on heightened alert.

The Roxbury YMCA, which started its summer job and camp programs yesterday, was touched by two of the eight Fourth of July incidents. A camper’s brother was a victim, and a staff member’s son attended a cookout where one of the shootings took place, said executive director May Vaughn.

“This is the first day we’ve met them, and we’ve already had to have conversations with them about safety and where do you live,’’ as well as safe ways to get home, she said.

During the summer, the teen center opens most days from 6 p.m. until at least 11 p.m., which Vaughn calls “critical hours.’’ Teens do not have to pay during that time. The YMCA is also waiving camp costs for the camper whose brother was felled by the weekend violence, Vaughn said.

It is important to have prevention and intervention programs so children who are doing well or those needing extra help “don’t cross over’’ into violence and street life, said Andrea Swain, executive director of the Roxbury Boys and Girls Club, which has about 250 summer campers and 75 teen employees. “When there are more employment opportunities and youth activities, there’s less crime.’’

Having a job means having a paycheck and something to lose, said Emmett Folgert, executive director of Dorchester Youth Collaborative. “We remind them of that,’’ he said.

But Robert Lewis, vice president for program for the Boston Foundation and the former head of the city’s street worker program, said last week’s nonfatal shooting of a 4-year-old in Harambee Park forced them to reevaluate what they do and how they do it, “to think more strategically about all of our efforts.’’

After Monday’s shootings and stabbings, Lewis said he immediately touched base with colleagues in the foundation program called StreetSafe, which pays street workers to engage so-called impact players, those most likely to be a shooter or victim, and help them find such things as jobs and housing.

On Monday night, Lewis said, their job was to try to keep James Coakley’s friends from avenging his death.

Coakley was shot and killed on Hollander Street in Roxbury on Monday, making him one of three recent victims in contact with StreetSafe.

“His mom is asking that there be no retaliation, so she had our workers bring in one of his best friends’’ and talk to him, Lewis said.

Project HIP-HOP has not been exempt from the recent violence. A 21-year-old who died from gunshot wounds about a week ago was a former member, White-Hammond said, adding that street violence has directly affected her organization for the past eight years.

“I never want to come to the point where I accept young people are going to do die, but that’s become my reality,’’ she said.

When victims do not die, there are other issues to contend with, particularly their mental and physical health, she said. Young people often get the immediate emergency care needed, but long-term assistance - such as prescriptions, physical therapy, and counseling - can be problematic because many crime victims do not have premium health care.

And asking for help from city or other community agencies can be a challenge when the victim does not have a clean record, she said.

“If you have a young person and they weren’t involved in any street issues, it can be relatively straightforward,’’ she said. “But if they were deeply involved or straddling that life, it can get deeply complicated.’’