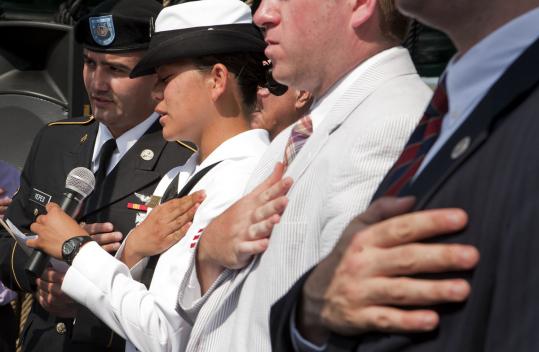 Armed with noisemakers and plastic blow-horns, Navy personnel aboard the USS Constitution waited yesterday for one of their own to become an American citizen.

Jessica Rodriguez, 18, was born in the Philippines and moved to the United States with her family. After graduating as valedictorian from her high school in San Jose, Calif., she joined the Navy. For the better part of a year, she has been a firefighter on the Constitution.

Now, she gets to call herself an American.

“My friends, when they found out, they were all really excited that they would get to watch the ceremony on the ship,’’ said Rodriguez, who had laughed as her fellow seamen hooted and took pictures when she received her naturalization certificate.

Rodriguez and 25 others became US citizens at the Charlestown Navy Yard in one of approximately 350 naturalization ceremonies that took place throughout the country yesterday.

The sun scorched the deck of the Constitution - the world’s oldest floating commissioned warship - but that did not ruin the festivities for the newly minted citizens and their families, glistening with sweat as they wore their Sunday finest. In speeches peppered with quotations from presidents past, officials congratulated the 26 new Americans aboard one of the most historic vessels in America.

“I think I’m a bit biased, but I can’t think of a better place for you to come and take the oath of citizenship for the United States,’’ said Timothy Cooper, commander of the frigate.

Magistrate Judge Marianne Bowler called on the men and women to consider the delights, and the responsibilities, of becoming a member of the electorate.

“Rather than simply accepting a mere birthright, you chose this country,’’ Bowler said.

She explained that citizens are counted on to fulfill two responsibilities: to vote and to serve as jurors. Taking time out of day-to-day life to better your community is a cornerstone of the American experience, she said.

“I remind you that this is the land of immigrants, a land made strong with the energy and talents brought from other parts of the world,’’ Bowler said.

Jessica Rodriguez was not the only new citizen with ties to the Constitu tion. Simon Winchester, 66, an author and journalist born in the United Kingdom, published a book in 2010 about the Atlantic Ocean. The book featured stories about the travails and triumphs of the Constitution.

When Winchester decided that he wanted to become a US citizen, Christopher Melhuish, former commander of the Constitution, invited him to become a citizen aboard the vessel.

“This was everything that I’d hoped for,’’ Winchester said. “To walk aboard as a Brit, and then to swear an oath and disembark as an American - that’s special.’’

Winchester said he first fell in love with America after he graduated from high school, when he hitchhiked around the country for seven months. He traveled 38,000 miles, he said, and spent only $18 during the whole trip. That experience taught him about American warmth and generosity.

“It seemed to be that this was the country where you forget the bitterness of your roots and meld into this one experiment of a country,’’ Winchester said.

Winchester wrote an article in the most recent issue of Newsweek, explaining why he decided to pledge allegiance to the United States flag. “I now truly wanted to throw in my lot, to play in full my part in America’s making and its future,’’ he wrote.

Arlande St. Louis, 28, said she has felt like an American for most of her life. She arrived from a small town in Haiti when she was 2 years old. To her, America is the place in the world where she feels most at home.

“For most of my life, I might as well have been an American citizen,’’ St. Louis said. “It just never dawned on me to do it.’’

St. Louis has a 6-year-old son who was born in the United States, and now, she said, they can both share the experience of being Americans.

“It feels good,’’ St. Louis said. “And it feels more special because it’s Independence Day. It feels like I’m part of history.’’