Wellesley bridge replaced in a snap 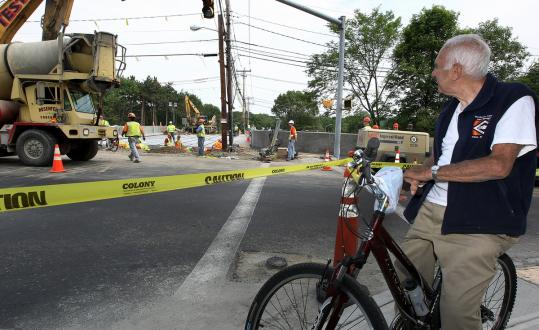 Walter Cardinali rode his bike from Needham yesterday to check on the progress of the work on the Cedar Street bridge. (Pat Greenhouse/ Globe Staff)
By Laura J. Nelson Globe Correspondent / July 4, 2011

WELLESLEY - The last time construction workers replaced the Cedar Street bridge, in 1936, Gordon Miller was 12 and America was in the throes of the Great Depression.

A cheer went up from onlookers and construction workers as Miller took a tentative step onto the raw concrete.

Demolishing the old bridge before pouring a new one would take two years or more, officials said. Instead, workers built the new bridge on a cradle of steel beams about 100 feet away, demolished the old bridge Friday night, then slid the new slab into place yesterday morning.

“People from the neighborhood called and said, ‘You’re building the bridge in the wrong place,’ ’’ said Jack Harney, director of operations for J.F. White Contracting Co. “They couldn’t believe we were going to slide it into place.’’

The bridge was demolished with a few thwacks - a sign that the 75-year-old structure was ready to go, said Frank DePaola, acting highway administrator for the Massachusetts Department of Transportation. In recent years, the old bridge had been wrapped in black mesh to keep cement in place, residents said.

Around 8 a.m. yesterday, the 530-ton slab of concrete about the size of a basketball court was lifted onto waiting machinery and positioned directly east of the Cedar Street gap, where crews had prepared the old abutments and supports for a new topping. Four remote-controlled machines inched the bridge into place by 9:30 a.m.

With memories still fresh from the nearby Route 6 bridge, where construction and congestion dragged on five years longer than expected, the state wanted to finish Cedar Street quickly, DePaola said.

Crews are now adding ramps, filling in small holes between the chunks of concrete, and cleaning up the steel plates littering the construction site. The bridge is expected to open by 10 tonight.

This replacement is the second in the Transportation Department’s Accelerated Bridge Program. The first was in Phillipston in October.

The Cedar Street bridge project is similar, on a much smaller scale, to a Department of Transportation initiative aimed at replacing 14 heavily used Interstate 93 bridges by the end of August. During 55-hour periods, from 8 p.m. Friday to 5 a.m. Monday, one bridge each weekend is slated to be closed, demolished, and reassembled using precast sections maneuvered into place by cranes.

Similar projects have been done in Florida, Utah, and California, said Shoukry Elnahal, the department’s deputy chief engineer for bridges and tunnels. The technology to build prefab bridges has been around for about six years.

Miller and about 30 other people, some with cameras and children in tow, gathered yesterday at the station across the street to watch.

Deborah Innes, 52, lives on Cedar Street a few blocks south of the bridge.

With Innes was Dwight Rogers, 57, who works for Wellesley’s water department. He observed from 6 p.m. to 11 p.m. Saturday, and came back at 5:30 a.m. yesterday.

“I like bridges and construction and big machinery,’’ Rogers said. “And watching this choreographed thing is incredible.’’