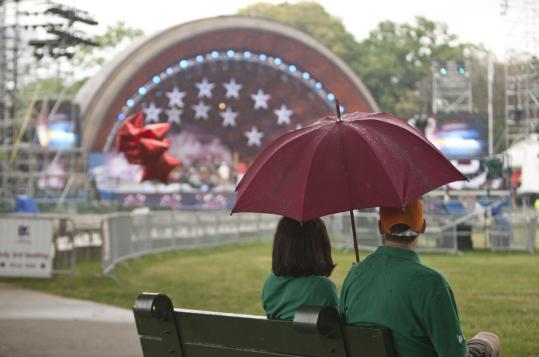 Cristina MacMahon and her husband, Brian, took a break yesterday from their work as volunteers at a rehearsal for the Boston Pops Fourth of July concert. (Matthew J. Lee/ Globe Staff)
By Michele Richinick Globe Correspondent / July 4, 2011

As America geared up to commemorate its 235th birthday, Harold and Julie Garner celebrated their 40th wedding anniversary on the Esplanade, far from their small Illinois city.

“He loves music and I love music, and everything in our house is America,’’ Garner, of Ottawa, Ill., said yesterday, wearing a white T-shirt with blue and red stars. “This is my first time in Boston, and [the concert] was the main attraction.’’

Gloria Kelley and her two friends, decked out in star-shaped sunglasses and red-white-and-blue accessories - Hawaiian leis, top hats, jewelry - welcomed the Illinois couple into their circle of chairs yesterday morning outside barricades surrounding the Hatch Shell.

“[The concert] hasn’t even started yet and we’re already having fun,’’ said Kelley, of Gardner, who arrived at the Charles River Esplanade at 11:30 a.m. “That’s what it’s all about.’’ This is the third year she has attended.

“One of Boston’s better-kept secrets of the rehearsal has slowly gone out to the public. It used to be 15,000 to 20,000 people; now it is up to 75,000 people,’’ he said. “Because it’s the same performance, the same great music . . . without the fireworks. So they come down here and avoid the crowds for tomorrow.’’

Karen Russell of Quincy arrived before 8 yesterday morning to be first in line behind one of the barricaded areas.

“I prefer to come to the concert on the third because it’s less chaotic than the fourth,’’ said Russell, who was wearing red-white-and-blue spandex shorts, a white tank top, blue sneakers, a red bandanna, and a sweatband. “This is probably my first favorite holiday, because people really come out and celebrate their patriotism.’’

Behind another barricade, Paul Ford of Boston and Andrea Cotton of Framingham said they hoped to get a place within the first 10 rows once the Oval opened.

“We have a designated runner. The rest are mules,’’ said Ford, who has attended the rehearsal for the past 11 years. “[The runner] puts the tarp down and waits for everyone else to join.’’

The Oval will open to concertgoers this morning at 9. Overnight camping is not allowed.

For the past seven years, Ann Ducharme, owner of Rae’s Gourmet Kettle Corn in Londonderry, N.H., has sold popcorn during the Pops’ Fourth of July rehearsals and performances. Today she plans to work for 23 hours, preparing, selling, cleaning, and disassembling.

“But it’s worth it. It’s our biggest event of the year,’’ she said yesterday while standing under her vendor tent. “To get ready for this event, we bought 1,000 pounds of popcorn. We might not use it all, but we’re prepared.’’

The 20-minute fireworks show will follow the performances at 10:30.

Weather today is expected to be in the 80s and humid, with sunny skies and a faint breeze, said Hayden Frank, National Weather Service meteorologist in Taunton. Showers may move in this evening.

Despite looming gray clouds and chances of rainfall and thunderstorms throughout the area yesterday, concert attendees said they wouldn’t allow rain to dampen their fun.

“We have ponchos, umbrellas, and tarps,’’ said Kelley, as she waved an American-flag bandanna in the air. “Let it rain. We don’t care.’’