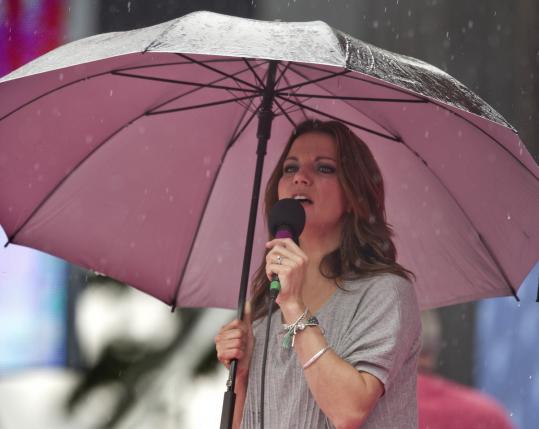 Standing under a black umbrella amid a hard rain is probably not what Martina McBride had in mind for yesterday. But that’s where the multiplatinum country singer found herself, commanding the Hatch Memorial Shell stage on the Esplanade with the Boston Pops and conductor Keith Lockhart behind her.

Their rehearsal marked a fast and stunning turnaround for the Pops’ most high-profile national event. On Thursday afternoon, just days before the annual Fourth of July Fireworks Spectacular, Lionel Richie canceled his appearance as the musical guest after he injured a vocal cord.

Suddenly, the Pops and the event’s production company were left in limbo, scrambling to find not only a headliner to anchor the nationally televised show, but also an artist who could deliver on short notice.

Within a few hours, McBride had accepted the last-minute invitation. Ahead of her first and only rehearsal with the Pops yesterday afternoon, McBride wasn’t even remotely fazed.

“It’s just exciting,’’ McBride said. “There is a little bit of the unknown because we haven’t performed these songs together before. I really didn’t have charts or orchestral arrangements for the songs we’re performing. It’s a little bit of pressure on [the Pops], too. I wish I could have just come and handed them everything.’’

Instead, those duties fell to the Pops in a flurry of impromptu preparations.

“The funny thing about this is that you have to be flexible enough to roll with the punches, because this is certainly the most close-to-the-event issue we’ve ever had,’’ Lockhart said en route to yesterday’s rehearsal.

The conductor noted that while McBride was a quick replacement, it’s not as late in the game as one might expect. He and the orchestra would not have rehearsed with Richie until yesterday, even though Richie’s participation was confirmed months ago. One rehearsal and a preview concert for the public last night are part and parcel of the programming.

“That is totally typical,’’ Lockhart said, “and frankly, that’s enough for this kind of thing. They’re not doing an entire concert with us. They’re doing three numbers. Most of the other things we have prepared earlier on.’’

The real challenge, Lockhart said, centered on making sure the orchestra was ready to work with a new collaborator.

“Basically, I got a phone call about this at, oh, midnight on Thursday,’’ he said. “So the first question was, who are we going to get to do the charts, and can they turn them around in 48 hours? Fortunately, we have people who can do that.’’

“It doesn’t always go according to plan,’’ admitted Jack Sussman, executive vice president of specials, music, and live events for Entertainment, which books the Fourth of July headliner with Pops input and approval. “We do live TV on a regular basis. Stuff doesn’t always happen the way you did it in rehearsal. You have to surround yourself with a group of people that can take in the situation, create an answer, and enact it within a moment’s notice.’’

Sussman said Richie’s cancellation was unexpected, but there was no doubt about why he had to pull out of the engagement.

“Lionel’s the real deal,’’ Sussman said. “He was thrilled [to be a part of it], which is why you knew when that phone call came that it was serious.’’

In a statement the Pops released Friday morning, Richie expressed his disappointment: “It was such an honor being asked to celebrate the Fourth of July with this legendary orchestra, and I hope to perform with them in the future.’’ Richie was not available for further comment for this story.

McBride’s appearance signals the second consecutive year that a country artist has headlined the event; last year it was Toby Keith. That irks some skeptics who grouse that this is Boston, after all, not Texas (as one online reader quipped).

“Obviously, this is not a hotbed of country music activity, but this is particularly for the national [televised] portion of the program,’’ Lockhart said. “This is a very heartland sort of concert, and I think, especially on patriotic holidays, country artists are appropriate. Plus, it’s easier to make a marriage between them and an orchestra than [a rock artist] and an orchestra.’’

McBride said she has performed her songs with an orchestra before, including with the Boston Pops several years ago for a Christmas special, but it’s been a long time.

At yesterday’s rehearsal, she sounded solid, if a bit tentative, as she and the orchestra ran through the songs: two of hers (“Independence Day’’ and “This One’s for the Girls’’) and a perennial favorite (“God Bless America’’).

“As a musician, it’s exciting to see what they’re going to do with the songs and with the instrumentation,’’ McBride said. “You get used to doing the same thing, and it’s always exciting to be able to do something different with your music. I can’t wait.’’

She was undeterred by the magnitude of the performance she would soon give. The Pops’ Fourth of July festivities routinely draw more than 500,000 spectators to the Esplanade, with a television audience in the millions. (The national portion of the program airs on CBS tonight at 10.)

“We got thrown into this together at the last minute, so that kind of lends its own excitement to the whole event. I’m not nervous in the least. I know they’re going to take good care of me,’’ McBride said. “I was just glad I did not have plans on the Fourth of July this year. I guess everything happens for a reason.’’