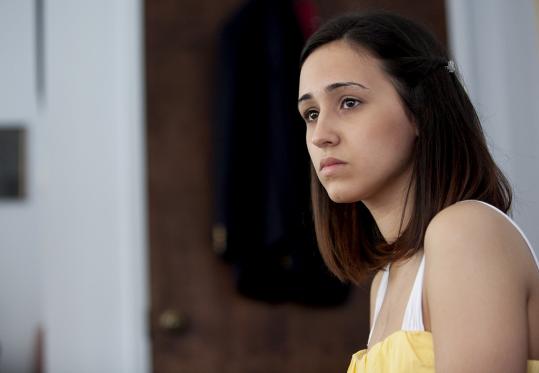 Lizandra DeMoura, 18, is facing deportation to Brazil after a traffic arrest in May. She came to the United States as a child. (Yoon S. Byun/ Globe Staff)
By Maria Sacchetti Globe Staff / July 3, 2011

One early evening in May, a Boston police officer arrested Lizandra DeMoura for traffic violations and driving without a license. In another city, she might have been booked and released for a court hearing. But in Boston, the 18-year-old was jailed overnight, taken to court, and handed over to federal immigration agents, who hauled her away in chains.

Now she is facing deportation to Brazil.

“I felt like an animal,’’ DeMoura, who has lived here since she was a child, said in a recent interview in her lawyer’s office in Boston, wearing an electronic monitoring device around her ankle.

Her case - one of three to emerge in recent weeks - lies at the center of the contentious debate over Secure Communities, a federal program pioneered in Boston that uses fingerprints supplied by police and other law enforcement agencies to detect illegal immigrants.

The cases disprove for the first time claims by Boston Police Commissioner Edward F. Davis that the federal program, as implemented by the city, is only being used to root out serious criminals.

After the Globe presented him with these examples last week, Davis urged US Immigration and Customs Enforcement to halt deportation proceedings against them. Davis said Boston joined the program to sweep out violent criminals, and would withdraw if cases such as DeMoura’s are widespread.

“I’m disappointed with what I’m seeing,’’ Davis said, adding that he has asked the immigration bureau to review the noncriminal cases.

Though critics of illegal immigration encourage police to enforce immigration law, Davis said he only wanted to target criminals. A broader net, he said, would discourage ordinary immigrants from reporting crime. “I don’t want people to feel that they have to fear the police, no matter what their status is.’’

US Immigration and Customs Enforcement did not respond to questions about Davis’s concerns. But spokesman Chuck Jackson said the agency recently announced changes to Secure Communities to more tightly focus it on serious criminals, including a new advisory committee that will make recommendations about whether the US government should pursue immigrants stopped for minor traffic violations.

Jackson pointed to several cases that he said Boston police helped bring to light. These included a 2009 case when Boston police helped find a Jamaican man, a violent gang member with a drug conviction. He had illegally reentered the country after being deported, a federal crime, and is now serving 57 months in prison for that offense. He will be deported when the sentence is completed.

Officials launched Secure Communities in 2008 to automatically check the fingerprints of everyone arrested through immigration databases. The computer system alerts Immigration and Customs Enforcement when someone is here illegally, and the bureau decides whom to detain for deportation. The program, piloted in Boston in 2006, has expanded to more than 40 states. Boston is still the only Massachusetts community participating.

Catching serious criminals is the bureau’s stated top priority under the program, which federal officials plan to implement nationwide by 2013 as mandatory even for states that object. But officials have said that anyone under arrest who is here illegally could be deported.

Because of concerns about racial profiling and high numbers of noncriminals being deported under the program, Governor Deval Patrick last month followed the governors of New York and Illinois in rejecting Secure Communities for state law enforcement. Massachusetts, however, turns over convicted criminals to Immigration and Customs Enforcement once their sentences are served.

Federal statistics show that 183 of 352 immigrants deported from Boston since 2008 - or about 52 percent - had no criminal record, much higher than the national average of 29 percent.

“If the goal is to get the bad people off the street, nobody can object to that,’’ said DeMoura’s attorney, William Joyce, a former Boston immigration court judge who is fighting her deportation. “The problem is they don’t seem to be getting the right people.’’

Jessica Vaughan, director of policy studies for the Center for Immigration Studies, a group that favors stricter controls on immigration, said she believes cases such as DeMoura’s are the exception. Had Secure Communities been fully deployed, she said, it might have prevented the brutal rape of a Rhode Island woman in 2008 by an illegal immigrant from Guatemala, or this year’s savage murders of a Brockton woman and her son in which police indicted a man from Ecuador. Both men had past arrests.

“The benefits that the program offers in being able to more easily find all of the really serious cases far outweighs the very tiny risk that a sympathetic case might get caught up in the system,’’ she said. “Though the case might seem sympathetic, they’re still here illegally.’’

Advocates for immigrants say that in Boston, Secure Communities makes immigrants afraid to report crime. The Massachusetts Immigrant and Refugee Advocacy Coalition, an umbrella group, and others have urged Boston to withdraw from the program.

“End the program. It doesn’t work,’’ said Heloisa Galvao, executive director of the Brazilian Women’s Group in Allston. “We had this idea that Boston was friendly to immigrants. . . . This program, it tells the opposite. We really feel betrayed.’’

The Globe documented three cases of immigrants stopped for minor traffic violations and then arrested on charges such as driving without a license, a misdemeanor punishable by up to 10 days in jail and up to a $1,000 fine. All were picked up by Immigration and Customs Enforcement and none had criminal records. In each case, charges were dismissed or the person was found not responsible.

Lindomar Da Silva, a 36-year-old laborer who came to America 10 years ago from Conselheiro Pena, a small town in southeastern Brazil, was stopped in April for turning into a Burger King without signaling.

Da Silva said he spent several days in jail and had to pay a $5,000 bond to the federal government - money he hopes they will return to him.

The episode was in stark contrast to an encounter with the State Police the year before, when another driver rear-ended Da Silva in Everett. Court records show that Da Silva was issued a citation for driving without a license and released. He said he never heard from federal immigration authorities.

Now he is fighting deportation in federal court.

“There are more cases happening here [like mine],’’ Da Silva said. “There are more people in the jail, people like me, but they didn’t have money to get out.’’

Also in April, police stopped Leonardo Machado, a construction worker from Brazil, for having a broken brake light and arrested him on charges of driving without a license. His voice faltered as he recalled a sudden swarm of police officers around the truck and his subsequent delivery to federal immigration offices in Burlington.

He said he was so traumatized by being put in chains that he signed a voluntary deportation order agreeing to leave the United States at his own expense.

DeMoura said she is terrified that authorities will send her to Brazil, where she does not speak the language. But she also feels lost in America, where she is ineligible for a driver’s license and college scholarships. Feeling helpless, she dropped out of high school and took a cash-only job as a secretary.

She had lived a quiet life until that night in May, when she borrowed her mother’s car to drive to a friend’s house to print out dance instructions for a church performance. A police officer in Charlestown stopped her for allegedly going through a stop sign and speeding at 40 miles per hour. She was arrested on traffic charges including driving without a license.

She spent the night sobbing on a concrete bench in a Boston jail. The next day a judge dismissed the charges and immigration agents took her to their Burlington headquarters for processing. They affixed a tracking device to her ankle that was finally removed almost two weeks ago. The device made it hard to ride her bike.

Now, she is making plans to return to school and trying not to think about her future.

“It just scares me a lot,’’ she said, twisting tissues in the lap of her yellow sundress. “I’ve been here all my life.’’

Correction: Because of incorrect information provided to the Globe, this story incorrectly stated the penalty for driving without a license in Massachusetts. The penalty is a fine of between $100 and $1,000.