Expected to net more than $1.2m for the DNC 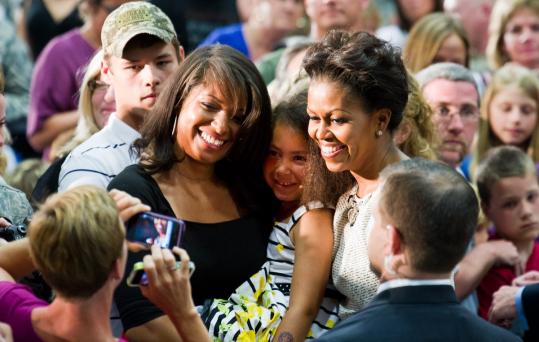 First lady Michelle Obama visited Boston and Vermont yesterday, as she and President Obama made a final dash for cash before the close of a fund-raising quarter that will provide the first relative measure of the strength of the 2012 White House contenders.

Republican front-runner Mitt Romney, making his second bid for the presidency, posted an early marker Tuesday when his staff announced he expected to raise $15 million to $20 million.

The first lady’s stops yesterday were expected to raise more than $1.2 million for the Democratic National Committee, whose primary focus now is ensuring the president’s reelection. The president had his own fund-raising trip to Philadelphia.

Final reports for the quarter are due in the middle of July.

Michelle Obama’s visit to the Chestnut Hill home of philanthropists Elaine and Gerald Schuster, the fifth such stop on a fund-raising tour that started in May, provided her with the opportunity to to make her financial pitch in very frank and personal terms.

She told an audience of about 120, which included Governor Deval Patrick but was mostly women, about her transformation as a political wife, as well as the toll the presidency takes on her husband each day.

“I see the worry creasing his face. I hear the passion and determination in his voice. ‘You won’t believe what these folks are going through.’ He told me that last night. ‘Michelle, it is not right. We’ve got to fix this. We have to do more,’ ’’ she said.

Yet as her husband did a day earlier during a news conference, Obama urged patience as the administration works to help the country emerge from a recession.

Similarly, Obama echoed her husband as she evoked the image of their two young daughters, Malia and Sasha, in trying to stir Democratic supporters.

“The truth is that no matter what happens, my girls will be OK,’’ she said. “My girls will have plenty of advantages and opportunities in their lives. And that’s probably true for many of your kids as well.

“But I think that the last four years have shown us the truth of what Barack has always said: That if any child in this country is left behind, then that matters to all of us, even if she’s not our daughter, and even if he’s not our son. If any family in this country struggles, then we cannot be fully content with our own family’s good fortune, because that is not what we do in this country,’’ she said.

In opening her remarks, Obama also described how campaigning in 2008 helped her overcome her fears about her husband running for president.

“I was proud of the work that he was doing in the Senate. And I thought that he would make a phenomenal president. That wasn’t the issue,’’ she said. “But, like a lot of folks, I still had some cynicism about politics. And with two young daughters at home, I was worried about the toll that a presidential campaign would take on our family.

“So it took some convincing on Barack’s part. And by ‘some,’ I mean a lot; he’s still paying back,’’ she said.

Obama said she warmed to the decision as she began campaigning in backyards in Iowa and New Hampshire.

“It’s about meeting people one-on-one, hearing what’s going on in their lives,’’ she said.

After leaving Boston, Obama flew to Burlington, Vt., for an event recognizing the military and the family sacrifices endured by the armed forces, and two fund-raisers.

They were organized by Jane Stetson, a Vermont resident who is national finance chairwoman for DNC.