Crackdown misses the point, some say 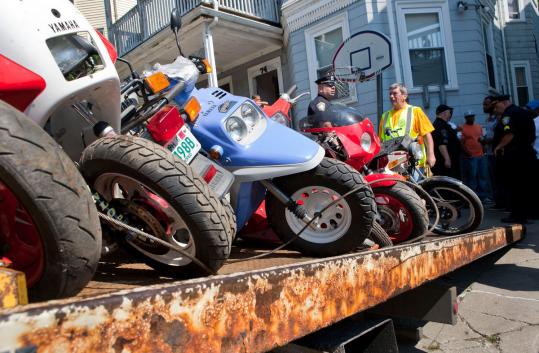 Boston police confiscated a number of motorbikes at a Mattapan residence yesterday as part of a crackdown after the shooting of a boy in a city park. (Kayana Szymczak for The Boston Globe)
By Akilah Johnson and Martine Powers Globe Staff / June 30, 2011

A child was shot in a Dorchester park Monday night, and motorized dirt bikes emerged as the villain, with the city moving swiftly to ban the buzzing vehicles, which the mayor and police commissioner blamed for fostering mayhem.

City officials acknowledged yesterday that their assertion is based on anecdotal evidence, mainly citizen complaints, because they do not keep statistics that indicate the bikes are used to commit crimes. And now, some community members, and at least one city councilor, say the crackdown, dubbed Operation Kick Stand, is a knee-jerk reaction that distracts from the underlying issues that lead to street violence.

“We have so many people who are leading very desperate lives in our society, and some are resorting to taking out their frustrations by opening fire on a local playground,’’ Councilor Charles C. Yancey said. “That should certainly deserve as much attention by the local administration and the media as these bikes.’’

A 4-year-old boy, who was with his mother, became the innocent victim of gang violence when he was shot in the back in Harambee Park, at Talbot Avenue and Wales Street. He is expected to survive.

Following the shooting, Mayor Thomas M. Menino banished illegal motorbikes from city parks and called for a law to prohibit them from all city streets.

Branding the crackdown an overreaction, Yancey, who represents the neighborhood, said his office has not received any complaints in recent months, compared with the daily grievances constituents logged several years ago. Yancey conceded that residents might be concerned about the bikes and not reporting their unease to his office, but he maintains that focusing on illegal street bikes is a misuse of resources.

Residents visiting Harambee Park said the motorbikes are irritating, with their loud droning day and night. But, they said, there’s no relationship between motorbike use and gun violence.

“It’s not so much the bikes,’’ said Brian Patterson, 37, as his niece and daughter cooled off in the park’s splash pad. “It’s the guys that are riding the bikes.’’

A park regular, Patterson said Monday’s shooting scared him. For years, he has hoped to see an end to gun violence in this part of town. But a simple act such as cracking down on unregistered motorbikes will not make a significant difference, he predicted.

“It’s not the mayor or the police that are going to fix the problem; it’s the kids,’’ Patterson said.

Jackson Julien, 18, of Dorchester, said he does not have a motorbike but knows they are popular among his peers, who enjoy racing up and down the sidewalk and popping wheelies. The bikes are not sinister, he said, walking near the park. Most people, he said, just come out to have fun with friends.

But city administrators insist the vehicles are being used to intimidate residents. During Monday’s incident, officials said, motorbikes exacerbated an already chaotic scene, proving emblematic of a progressively worsening problem. Police are investigating whether two young men seen fleeing the scene on a motorbike were the targets in the shooting.

Contrary to initial reports, officials now do not believe the shooting suspects rode motorbikes. “Enough’s enough,’’ said Dot Joyce, spokeswoman for Mayor Thomas M. Menino. “If you go to any park in the city, especially in the areas of Roxbury, Dorchester, or [Jamaica Plain], they’re rampant. They’re driving them on the streets, through the neighborhood to the parks. They’re using them as a way to get around quickly, but also to intimidate people.’’

But the city does not keep statistics on how many are confiscated, used in crimes, or involved in crashes. “We do not have any specific data available relative to motorbikes being used in the commission of crime,’’ police spokeswoman Elaine Driscoll said. She said it is a quality-of-life issue, and Police Commissioner Edward F. Davis “is largely concerned with these bikes causing nuisance and disorder in the neighborhood.’’

The information supporting Operation Kick Stand comes “from residents who have been terrorized by these things,’’ Joyce said, citing as an example an e-mail from a Dorchester resident thanking the city for its initiative. The resident, who when contacted by the Globe asked not to be identified, said his local park is inundated with the motorized dirt bikes.

The city’s crackdown targets the use in parks or nature trails of all motorized miniscooters, dirt bikes, and ATVs being used illegally, specifically those not properly registered. Reckless drivers and anyone driving under the influence will be targeted, too. And while the Boston Police Department has a no-chase policy regarding pursuit of these illegally operated vehicles, Driscoll said officers use a variety of strategies for curbing the motorbikes.

Yesterday, police confiscated 18 motorized dirt bikes from a house in Mattapan after receiving a tip that the yard was littered with the bikes and gas tanks. When officers arrived, they found 13 bikes behind the house, two on the back porch, and three inside.

Deputy Superintendent Thomas Lee said he believes someone at the house on Kingsdale Street was operating a repair shop in the three-family house.

There is no indication any of the bikes at the residence is related to Monday’s shooting, said Lee, adding that the seizure was a prime example of how Operation Kick Stand should work.

As officers carted away the motorbikes at Kingsdale Street, a little boy sat on the front steps of the light gray house and cried. He wanted to know why his bike was being taken away — and so did his neighbors.