Prominent pair poised to take up the defense 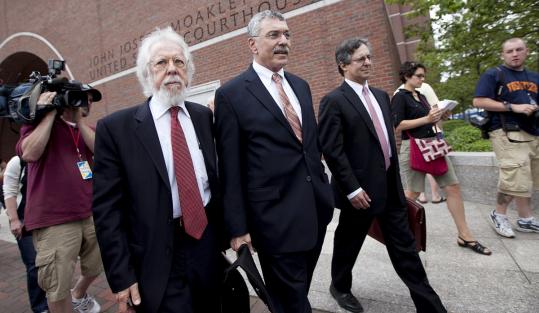 When a judge in the Virgin Islands wanted to sue a newspaper over stories on his bail rulings, he called Howard Cooper in Boston.

When former state senator Dianne Wilkerson needed counsel to defend her against federal corruption charges, she turned to Max Stern.

Now, the two prominent Boston lawyers are poised to team up on one of Boston’s most sensational criminal cases, representing reputed mobster James “Whitey’’ Bulger against accusations that he is responsible for 19 murders.

The two lawyers have not officially been assigned to the case, but were in federal court yesterday for a hearing on Bulger and have agreed to represent the captured gangster if he is granted court-appointed counsel, according to three people familiar with the selection process.

If Bulger’s request for a public defender is denied, he is responsible for retaining a lawyer.

Stern and Cooper are expected to take over for provisional attorney Peter Krupp in the coming days.

But colleagues say the pair is well-suited for a case that defense attorneys described as a vast and complex undertaking, and one that could take years to resolve.

“This is a stroke of good fortune for Whitey Bulger,’’ said Michael J. Connolly, a Boston defense attorney and former federal prosecutor who has worked with both lawyers. “These are two of the most capable, hard-working criminal defense attorneys in the city of Boston.’’

Lawyers across the city praised the selections and said the high-profile case deserved two leading attorneys. In a motion filed in court Monday, Krupp said the “constellation of cases against Mr. Bulger,’’ as well as the “voluminous record’’ of past litigation, would require a substantial team of lawyers working full time for several years.

“It was going to be an overwhelming task for just one,’’ said Stephen Weymouth, a Boston defense attorney who knows Stern well.

Weymouth said Stern’s intelligence, perseverance, and toughness made him an excellent choice for the case.

“He’s not going to be intimidated by the US attorneys, or what sounds like overwhelming evidence against Bulger,’’ Weymouth said. “It’s right up his alley.’’

Stern, a 1969 graduate of the University of Pennsylvania Law School, has more than 35 years of experience in criminal and civil cases, and in 1995 was named by Massachusetts Lawyers Weekly as one of the 25 most influential lawyers of the previous 25 years.

Cooper is perhaps best known for helping a Massachusetts judge win a $2.1 million lawsuit against the Boston Herald in 2005. One of the largest libel judgments in state history, the verdict secured Cooper’s reputation as a leading defamation lawyer who then helped at least five other clients extract corrections or apologies from the media.

“These are both first-rate lawyers in every respect,’’ said Michael Avery, a professor at Suffolk University Law School who knows both well. “They are among the very best lawyers not just in Massachusetts, but on the entire East Coast.’’

Both men share an idealistic streak, Avery said, which spurs them to take on difficult cases with clients accused of terrible crimes.

Stern, of Stern, Shapiro, Weissberg & Garin, represented Albert Lewin, who was accused of killing Boston police Detective Sherman Griffiths during a 1988 raid. After two years of litigation that uncovered police misconduct during the investigation, Lewin was acquitted of all charges.

Stern later defended Power Fasteners, the New York epoxy vendor accused of manslaughter in the 2006 death of a Jamaica Plain woman killed when a Big Dig tunnel ceiling collapsed. The manslaughter charges were dropped after the company agreed to pay $16 million.

Stern also devoted many hours to lobbying against instituting the death penalty in Massachusetts, colleagues said.

Cooper, a founding partner in the Boston firm Todd & Weld, is known as an aggressive cross-examiner also drawn to controversial causes. He once represented an Islamic group in its effort to build a mosque in Roxbury, despite a public backlash. He previously helped a Framingham antipoverty agency win a $1 million settlement in a lawsuit that claimed town officials tried to prevent it from building a center for recovering drug addicts.

“The law is clear that there is no room for discrimination,’’ he told the Globe.

Cooper recently represented a member of the Mashpee Wampanoag tribe in a legal dispute over fishing rights, arguing the tribe member had a right to harvest shellfish without heeding local size limits because the tribe never “ceded the rights they had to fish before the first settlers came to the continent.’’

In March, he defended a former Needham doctor who was accused of causing the overdose deaths of six people by prescribing them painkillers and said the case comes down to how doctors are expected to treat patients in pain.

Jonathan Saltzman and John R. Ellement of the Globe staff contributed to this report. Peter Schworm can be reached at schworm@globe.com.

More Whitey Bulger coverage
Your comment is subject to the rules of our Posting Policy
This comment may appear on your public profile. Public Profile FAQ