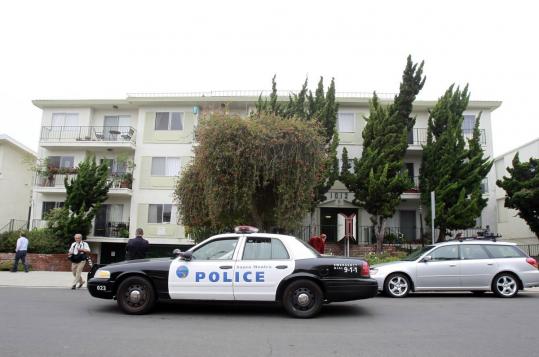 In addition to the $822,198 in cash found hidden in the walls of the Santa Monica, Calif., apartment where fugitive James “Whitey’’ Bulger was living, investigators said they found cellphones that may lead to additional stashed assets. (Lucy Nicholson/ Reuters)
By Milton Valencia and Shelley Murphy Globe Staff / June 28, 2011

James “Whitey’’ Bulger returned to Boston in disguise and “armed to the teeth’’ several times during his 16 years on the run because he had “to take care of some unfinished business,’’ prosecutors said in court documents yesterday.

The notorious gangster, arrested last week in Santa Monica, Calif., refused to say whom he was going to see or when, prosecutors said. But, according to his former associates, Bulger returned to Boston at least twice during his first year on the lam.

Bulger told FBI agents on his return flight to Boston that he traveled frequently while in hiding, visiting not only Boston but Las Vegas and Mexico, and that he stashed money with people he had trusted. He did not identify anyone who might be hiding his assets, according to the document.

Prosecutors said Bulger’s lifestyle showed he clearly has the resources to pay for his defense, the first legal issue to come up in a racketeering trial that includes charges of 19 murders.

“During his more than sixteen years as a fugitive . . . Bulger financed a relatively comfortable lifestyle for himself and his girlfriend,’’ prosecutors said in court documents, describing Bulger’s trips to Las Vegas, where he “won more than he lost,’’ and his ventures into Mexico to purchase medicine.

Investigators also said yesterday that they found two cellphones and other items in the apartment he shared with Catherine Greig. The phones could show whom Bulger and Greig contacted and whether they have assets beyond the $822,198 in cash found hidden in the apartment walls.

Bulger’s provisional attorney, Peter B. Krupp, has argued that Bulger needs a court-appointed, taxpayer-funded lawyer to defend him, in part because the federal government seized all the cash found in the apartment. Krupp said if government agents find other assets belonging to Bulger, they will probably seize those, too.

Prosecutors said Bulger and Greig told federal officials that Bulger’s younger brother William, the former Senate president, could help her post bail. “Of course, if that is true, William Bulger might also be willing to pay for an attorney to represent his brother,’’ prosecutors wrote.

The prosecutors have asked the court to order William Bulger and another brother, John, to fill out a financial affidavit disclosing whether they can help, citing case law that says a court “may consider whether he has income or assets available to him from other sources.’’

The documents note that John Bulger was convicted of perjury in 2003 after lying to a federal grand jury about his role in managing James Bulger’s financial affairs in Florida.

“James Bulger stands accused of an avalanche of serious charges,’’ prosecutors said in court documents, adding, “He has every incentive to lie and stick the taxpayers with the bill for his defense.’’

A hearing on the appointment of Bulger’s permanent counsel is scheduled for 2 p.m. today.

The sparring over whether Whitey Bulger can afford a lawyer came on a day when his girlfriend Greig hired well-known lawyer Kevin Reddington to defend her against charges of harboring a fugitive.

Nearly inseparable during their time in California, Bulger and Greig have taken different paths since their capture. Bulger is being held in a Plymouth jail, while Greig is in Rhode Island.

He faces potential life in prison from a January 1995 federal racketeering indictment charging him with illegal gambling, money laundering, extortion, and drug trafficking. He also faces a second potential life sentence in a federal racketeering trial charging him with 19 murders, as well as state murder trials in Oklahoma and Florida, which impose the death penalty.

Greig, by contrast, faces up to five years for helping Bulger in his flight. Now they will have separate lawyers, too.

In a separate emergency motion yesterday, Krupp asked the court to order that federal authorities disclose to him any statements Bulger made after his arrest.

Krupp said a complete disclosure of Bulger’s statements could undermine prosecutors’ arguments that he has money stashed away.

The lawyer also asked for US District Court Chief Judge Mark L. Wolf, who is presiding over one of the cases, to issue an immediate order barring disclosures and leaks of information by the FBI and other agencies to the news media. The request is based on a Boston Globe report Sunday about Bulger’s trips to Mexico to purchase heart medication, information provided by a source.

“The cases against Mr. Bulger have already been so highly publicized, hyped, written about, and sensationalized,’’ Krupp said, “that it will be as close to impossible for Mr. Bulger to get a fair trial on these charges as can be, and certainly more challenging than in any case in modern memory.’’

Krupp noted in court documents that whoever represents Bulger will have to sort through two racketeering cases, one of which includes 2,300 docket entries and more than 17,000 pages of hearing transcripts. The second case involves numerous homicide cases going back as long ago as 40 years.

Anyone who represents Bulger will also have to sort through the trial record against John J. Connolly, the disgraced FBI agent who was convicted of racketeering and murder in connection to his relationship with Bulger.

“The constellation of cases against Mr. Bulger will undoubtedly require the full-time work of a number of attorneys, paralegals, and investigators over several years,’’ Krupp said in court records.

In a related development yesterday, US District Court Judge William G. Young placed a lien on the cash seized in Bulger’s apartment at the request of Julie Dammers Rakes, who won a $31 million civil judgment against Bulger five years ago. Her attorney, Anthony Cardinale, said the money should go to a Bulger victim before it goes to the government.

Bulger used threats of violence to take over the South Boston liquor store owned by Dammers Rakes and her former husband in the early 1980s. Young’s decision only froze the money, and no decision on where it should go has been made.

Dammers Rakes’s former husband, Stephen Rakes, has said that he saw the fugitive Bulger walking toward him in a well-lighted hallway at the L Street Bathhouse on a summer afternoon in 1995, according to court records.

The reported sighting was weeks before Rakes was to testify before a federal grand jury investigating allegations that Bulger threatened to kill Rakes in 1984 if he didn’t sell him the liquor store soon after it opened.

Shaken by the encounter, Rakes said he lied to the grand jury, saying he willingly sold his store.

A second Boston sighting reportedly happened earlier in 1995, not long after Bulger had fled with longtime girlfriend Teresa Stanley to avoid arrest.

Bulger returned to the area and dropped Stanley off in Hingham, then drove to Malibu Beach in Dorchester, where his close associate Kevin Weeks was waiting in a car with Greig. She had her bags packed and joined Bulger for what would be a 16-year flight.

Weeks said he did not know about any return trips to Boston.

“He might have been after anyone who said something derogatory about him,’’ Weeks said in a brief telephone interview yesterday.

“It’s crazy if in fact he did come back. He’s the most wanted guy, and he’s going to ride around Boston?’’