Awaiting the next chapter

Many say Bulger will name names 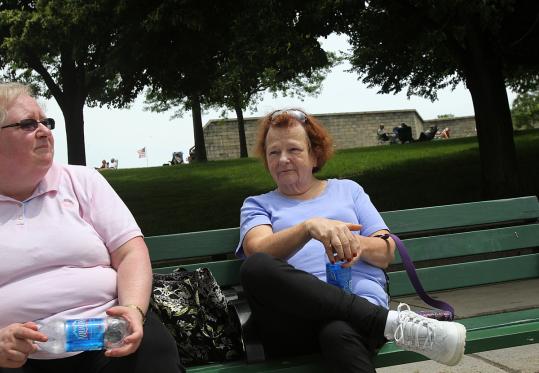 From the gritty South Boston housing development where James “Whitey’’ Bulger grew up to the grassy stretches of Castle Island, people out enjoying a warm Sunday afternoon said yesterday that they expect the former crime boss to implicate more federal agents for corruption in the handling of his case.

“He knows too much’’ about corruption within the FBI, Kevin McDonald, 49, said outside an apartment in the Mary Ellen McCormack housing development, where Bulger grew up when it was called the Old Harbor project.

The 81-year-old gangster was arrested Wednesday in Santa Monica, Calif., at the apartment he was sharing with his longtime girlfriend, Catherine Greig. The couple was brought back to Boston for court appearances last Friday.

Bulger’s handler before he fled an indictment in 1995, former FBI agent John J. Connolly Jr., is serving a prison sentence after being convicted in Miami in 2008 of second-degree murder for alerting Bulger and an associate about a potential witness against them, who was killed in 1982.

Yesterday, McDonald did not hesitate when asked if he thought that Bulger would accuse more agents of corruption.

He said he remembers Bulger doing “some good things’’ in the development. Once, McDonald said, Bulger helped an Old Harbor resident who had been sexually assaulted move to Florida with her family.

“He bought [plane] tickets, clothes,’’ McDonald said. “I guess he was a good guy in one way and a bad guy in another.’’

Ed Crowley, 84, of Peabody, who grew up in South Boston and remembers seeing Bulger, also said he thought the longtime fugitive could sink more agents.

“That’s a big operation,’’ Crowley, who was sitting on a bench on Castle Island, said of the FBI. “There could potentially be hundreds of people who were involved.’’

Two days after Bulger appeared in federal court in Boston to answer to his alleged involvement in 19 homicides and a roster of other crimes, people were divided on other aspects of the unfolding drama, what shape the legal proceedings will take and what fate he will face in the courts.

Some at Castle Island said Bulger should be sent to a federal prison far from Boston if convicted. Kansas, one woman suggested. Another thought reopening Alcatraz for him might be better.

But wherever he goes, there could be trouble, one man said.

“I would say someone’s going to try and break him out,’’ said James Piana, 53, of Raynham. Then Piana paused and reconsidered. “But he doesn’t have any friends left. He ratted them all out.’’

Three women from Charlestown on a nearby bench, including Margie Heinonen, 62, said they hope Bulger confesses to the killings. But, Heinonen said, jury intimidation will not be a problem if the case goes to trial.

“The only place he ever really mattered was right here in South Boston,’’ Heinonen said. “Boston’s a big place.’’

While she felt Bulger’s influence had waned, many people in his age bracket maintained a code of silence when asked yesterday about the man who spent 16 years on the lam.

“We’re not interested in answering any of your questions,’’ said one woman at Castle Island.

One woman who spoke briefly with a reporter declined to give her last name, despite her friend’s assurance that “he’s in jail now; he can’t hurt you.’’

And a man standing outside a McCormack apartment professed ignorance of the facility’s infamous former resident.