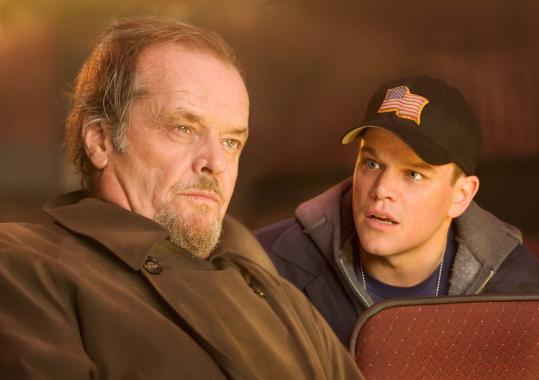 Through the 1980s and into the early 1990s, if there was an identifiable face of Boston in the popular national consciousness, it might have belonged to Sam Malone, depicted as an amiable former relief pitcher and proprietor of “Cheers,’’ a friendly, welcoming bar where everybody knew your name.

But in the 16 years that James “Whitey’’ Bulger was on the run, right up until his arrest last Wednesday, a more sinister onscreen image of the city surfaced. Courtesy of pop culture, Boston’s image underwent a kind of rebranding campaign, and it was not the kind to gladden the heart of the local chamber of commerce.

Increasingly, stories told about the city focused on its seamy underbelly (while amounting to a full-employment act for dialect coaches, who were kept busy teaching half of Hollywood how to drop their R’s at the end of syllables).

It was as if the revelations about Bulger’s reign of terror as the head of the Irish mob and his flight from justice encouraged filmmakers, television producers, and writers to probe beneath the surface of Boston’s notion of itself as a genteel, erudite Athens of America.

Just to cite three recent high-profile films in which the city was depicted as a seedbed of criminality, corruption, and violence: In 2006’s “The Departed,’’ Jack Nicholson played a ruthless South Boston mobster modeled on Bulger, with Matt Damon as a member of a State Police investigative unit who acts as his tipster and protector; in 2003’s “Mystic River,’’ Sean Penn portrayed an ex-con in a Boston neighborhood whose teenage daughter is slain and who responds with a lethal action of his own; and in last year’s “The Town,’’ Ben Affleck played the leader of a gang of Charlestown bank robbers who is drawn deeper into a web of wrongdoing, even as he tries to get out.

In one sense, of course, this through-a-glass-darkly perspective on the city allows for a more complex and truthful portrait than the beery bonhomie of “Cheers’’ ever did. But some of the recent depictions of Boston have succumbed to a different kind of narrowness, relying on an outdated stereotype of Boston as “an Irish city.’’ Recent US Census Bureau figures show that the number of Bostonians reporting Irish ancestry has dropped below 15 percent. In part, the focus on Irish-American characters may reflect how fully the story of Bulger — and his brother, William M. Bulger, who exerted great political power as the longtime president of the state Senate before becoming president of the University of Massachusetts — captured the imagination of those who make films and television shows.

In fact, the cable channel Showtime built not just a show but an entire series, “Brotherhood’’ (2006-2008) out of the Whitey-and-Billy dynamic. Though it was set in Providence, there was no mistaking the inspiration for this drama about a pair of Irish-American brothers: Tommy Caffee, a politician on the rise, and Michael Caffee, a career criminal.

Inevitably, the Bulger brothers inspired an episode of NBC’s “Law & Order,’’ which never met a real-life drama it could not lift. In a 2001 episode titled “Brother’s Keeper,’’ police officers question the alibi provided by two FBI agents for an Irish mobster suspected of murder, a case further entangled when the mobster’s brother enters the picture.

Whether directly inspired by Bulger or not, Hollywood’s appetite for gritty Boston-area stories has clearly quickened in recent years. That is evident in films as various as 1999’s “The Boondock Saints,’’ about Irish twin brothers who embark on a mission to kill gangsters; 2007’s “Gone Baby Gone,’’ a grim tale about the disappearance of a young girl, directed by Affleck and based, like “Mystic River,’’ on a novel by Dennis Lehane; and last year’s “The Fighter,’’ which revolved around Lowell boxer “Irish’’ Micky Ward and his half-brother, Dickie Eklund.

Bulger has also left a significant footprint on the bookshelves, as the compelling dramatic elements of his story have drawn writers of fiction and nonfiction alike.

The question of what the fugitive gangster has been up to all these years apparently kindled the imagination of Dorie McCullough Lawson, author of “Along Comes a Stranger.’’ In the novel, a Massachusetts native named Kate, growing restless after moving to her husband’s hometown in Wyoming, becomes friends with her mother-in-law’s new boyfriend, a brainy and charismatic fellow from the East Coast named Tom Baxter. Soon, though, Kate begins to suspect that Tom is actually Whitey Bulger.

Whitey Bulger’s presence is felt in his brother’s memoir, “While the Music Lasts,’’ and even in South Boston native Michael Patrick MacDonald’s family memoir, “All Souls.’’

Chuck Hogan, whose novel “Prince of Thieves’’ was adapted in “The Town,’’ is currently writing a screenplay for a film about Bulger’s Winter Hill gang and the gang’s chief enforcer, John Martorano.

All these writers are working in the long shadow cast by the late George V. Higgins. Four decades ago, in his debut novel “The Friends of Eddie Coyle,’’ Higgins brilliantly nailed Boston’s criminal milieu. In the 1973 film, Robert Mitchum, playing Eddie, gave one of best performances of his career, and when he arrived in Boston to prepare for that performance, the actor struck up an acquaintance with none other than Whitey Bulger, according to a 2010 piece in The Irish Times by former Herald sports columnist George Kimball.

“At the time, Bulger’s public image was that of an eccentric but essentially harmless South Boston version of Robin Hood, but Higgins, aware of exactly how ruthlessly dangerous Whitey could be, tried to convey his apprehension to the actor,’’ Kimball wrote. “Mitchum — who had in 1949 served time in California, an experience he likened to Palm Springs without the riff-raff, on a marijuana possession charge — reminded Higgins it was Bulger who was imperiling himself, by associating with a known criminal.’’

Before Higgins died at age 59 in 1999, he wrote more than two dozen novels. His final novel, “At End of Day,’’ which was published posthumously, explored the relationship between a South Boston mobster modeled on Whitey Bulger, the mobster’s henchman, and a pair of FBI agents.

Now that Bulger has been captured, it’s surely only a matter of time before new chapters of the saga start arriving in a bookstore, on a television, or at a movie theater near you.

South Boston mob boss James "Whitey" Bulger — who was captured June 22 after 16 years on the run — has served as a pop culture muse of sorts.
Your comment is subject to the rules of our Posting Policy
This comment may appear on your public profile. Public Profile FAQ