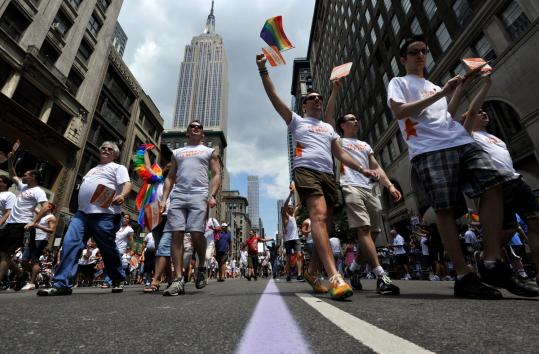 As the New York Legislature voted to legalize gay marriage Friday night, the tweets erupting out of Boston were celebratory and a little smug.

“Congrats, 2011 NY, for finally catching up to 2004 Massachusetts!’’ wrote a user named Sajizzle.

“So glad NY joined the other states for #MarriageEquality,’’ GHFanatic91 said. “Proud to be from the first state that approved it.’’

And from Pistachio: “Dear NY State, welcome to the future of civil rights. Love, Massachusetts et al. PS-California we’ll save you a seat. Txt when you get here?’’

Gay marriage activists and supporters in Massachusetts responded with elation this weekend as New York became the sixth and largest state in the country to legalize same-sex marriage. Celebrating at home or at the annual New York City Pride Parade yesterday, Bostonians said they were pleased to know that the Bay State, the first to legalize gay marriage, played an important role in the lead-up to Friday’s vote.

“People see that when gays and lesbians get married and start families, the sky doesn’t fall,’’ said Kara Suffredini, executive director of MassEquality, an activist group.

Suffredini said that legalization of gay marriage in Massachusetts was significant because it allowed individuals in other states, especially critics of gay marriage, to gain an understanding of the real-world effects that gay marriage has on communities.

“They see that marriage equality is good for families and good for communities, and that has implications nationwide,’’ Suffredini said.

Robyn Ochs, a speaker and educator, agreed. Often, detractors of gay marriage are “afraid of the unknown,’’ she said.

“When you look at New England and see that Massachusetts and Vermont and Connecticut and New Hampshire have marriage equality, that makes it easier for people to imagine it in New York,’’ Ochs said.

Ochs, who lives in Jamaica Plain, said she spent all of Friday night at her computer watching a live stream of the New York Senate proceedings. When the last vote rang out, she experienced “absolute, delirious joy,’’ she said.

“I held my breath through the whole thing,’’ she said. “When the vote came out, I burst into tears and finally started breathing.’’

Ochs, a founder of the Boston-based Bisexual Resource Center, had a special reason to become emotional about the New York vote: She was born and raised in New York and most of her immediate family still lives there.

In 2004, she and her partner became the first same-sex couple to marry in Brookline. Ochs said she often worried what would happen if she needed to move home to take care of her parents: Would the state recognize her marriage?

“For me, getting it in New York was especially meaningful,’’ Ochs said.

Sue Hyde, director of the Creating Change Conference with the National Gay and Lesbian Task Force, said the Massachusetts win was all about creating momentum.

Hyde said she believed that gay marriage in Massachusetts set a standard for other states and provided a model for gay activists in other states to push for same-sex marriage.

Still, she said, there are other hurdles that supporters in the state must tackle, such as improving nondiscrimination laws for transgender people.

“I’m not making a false claim of perfection or that all the work in Massachusetts is done,’’ Hyde said.

“But there is a way that our region is the forge of democracy and the forge of social justice, and I think there’s a lot of regional pride in that.’’

Same-sex marriage became legal in Massachusetts in May 2004 when the state’s Supreme Judicial Court ruled that it was unconstitutional for homosexual couples to be excluded from receiving marriage licenses. In 2007, a legislative move to put same-sex marriage to a popular vote was defeated.

New York’s same-sex marriage vote Friday night prompted some Bostonians, like Mario Nimock, 30, of Dorchester, to drive there with his partner for the annual New York City Pride Parade yesterday.

“After the legislation came down, we were just kind of happy about it and decided we wanted to go,’’ Nimock said. “It was really impromptu.’’

For Nimock, it was a perfect day for a parade, sunny and 80 degrees. Everywhere he looked, he saw smiles.

But the best part of the parade may have been the journey down, Nimock said. He and his partner drove from Massachusetts through Connecticut to New York.

“Every state we were in had gay marriage,’’ Nimock said. “That was never the case before.’’