Inside and outside courtroom, compelling drama unfolds 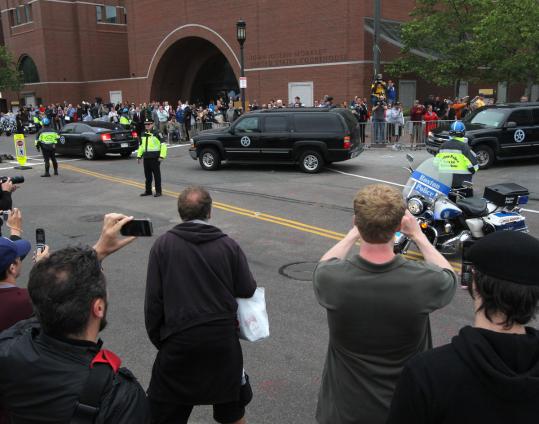 The John Joseph Moakley Courthouse became a South Boston fortress yesterday, besieged by the news media, protected by defenders on land and on sea, and swarmed by a public both curious and mindful of the history to transpire there.

The prize attraction was James “Whitey’’ Bulger, whose midafternoon appearance in Courtroom 10 made the standard fare of preliminary questions and arcane legal protocol anything but routine.

Federal, state, and city police boats patrolled the harbor behind the court. Security was tighter than at any time since the 2001 appearance of Richard Reid, the trans-Atlantic shoe bomber. And a crush of people eager to see the FBI’s Most Wanted Man had to be restrained at the fifth-floor door to the same courtroom where former House Speaker Salvatore F. DiMasi was convicted on corruption charges this month.

“We’re not going to have a riot here,’’ a court officer told the pressing crowd.

Instead, what the public saw, both in and outside the courtroom, was a riveting spectacle that showcased the homecoming of Boston’s most notorious gangster. The scene — a collage of legend, anger, awe, and anxiety — underscored how much Bulger had become part of the popular culture of a city he fled 16 years ago.

“I’m interested in all the stuff about this case — what he did in South Boston, all the poor people he harmed,’’ said Bob Manning, 71, of Quincy.

Manning, a senior research technician at the Dana-Farber Cancer Institute, said he had attended the trial here of John Connolly Jr., the corrupt FBI agent whose tip allowed Bulger to escape arrest in 1995. He also said he sat beside Bulger hitman John Martorano while attending Milton High School.

For Manning, the court was a natural magnet, where the swelling crowd watched US marshals in two black SUVs, escorted by Boston police motorcycles, whisk Bulger and his girlfriend, Catherine Greig, into a garage at the east side of the building.

Manning had past interest in the case, but others stopped by the courthouse almost by chance.

Les and Linda Merrill camped on a jersey barrier outside the main entrance for an unplanned glimpse of history. Les, 54, a Chelmsford firefighter, said he and his wife had taken the train to Boston to eat in the North End and walk the waterfront.

What began as a leisurely stroll ended on the front porch of a watershed moment in the annals of modern Boston. “This is like a Hollywood scene, and we’re part of it,’’ Linda said.

The crowd, which grew to the hundreds during Bulger’s appearance before two separate judges, included Jim Tenney, who had driven from Harwich yesterday to visit his brother, Paul, who taught history for 33 years in the Boston public schools.

Instead of a quiet get-together, the pair stood in the misty weather as lawyers and others, such as former state Senate President William M. Bulger, waded into and past a gantlet of reporters who crowded the sidewalk outside the arched entryway.

Upstairs, a long line of dozens of people snaked along the curving floor from the wooden doors to Courtroom 10. Members of the media had taken most of the front spaces, but others waited patiently for more than an hour before court officers began allowing about 100 observers into the room.

“I wanted to be part of it and say I was here,’’ said Gregg Pathiakis, 31, a native of Mattapan who now lives in Haverhill. “I know enough of what he did to this part of town.’’

Brian and Ina Corcoran of Braintree were among the first non-media members waiting in line.

“This would be comparable to going to see Al Capone in court,’’ Ina Corcoran said. “We weren’t working today, so we decided to come over.’’

Her husband, Brian, said: “It’s Boston history. There’s a lot of sadness and victims behind this, but we want to see what transpires and see Whitey get his justice.’’

Brian said he was particularly interested in seeing Greig in court. “Is she somewhat of a victim, too?’’ Brian asked.

Inside the courtroom, the drama was quiet, intense, and fraught with small but telling gestures — the gangster’s nod at his brother, William, the rigid posture of victims’ families, and the coiled attention of muscular US marshals.

After the business had concluded, the crowd dispersed among the bustling and gleaming buildings of the new South Boston. Inside, a remnant of the old had returned to a neighborhood that had changed dramatically in his absence.

“I thought he looked good for being that old and the circumstances,’’ said Katie Francisconi, 25, of Charlestown.

The spectacle, and its players, had opened.

Noah Bierman and Glen Johnson of the Globe staff contributed to this report. Brian MacQuarrie can be reached at macquarrie@globe.com.