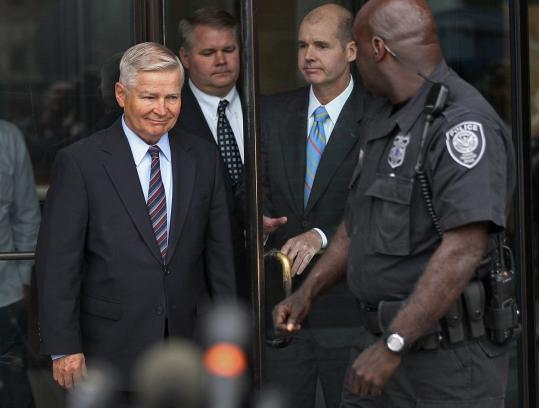 William M. Bulger smiled as his older brother walked into the courtroom after 16 years as a fugitive, and he got a smile back from the grandfatherly version of the wiry rebel he grew up with in a $29-a-month apartment in the Old Harbor projects in South Boston.

Boston’s most notorious gangster, a bearded James “Whitey’’ Bulger, offered a simple greeting. “Hello,’’ he mouthed, nodding slightly to the former president of the Massachusetts Senate, who sat in the second row.

The Bulger brothers — once feared and powerful forces who reigned over their respective fields of politics and organized crime — were reunited yesterday, just blocks from where they grew up.

William, a 77-year-old lawyer, has never condemned Whitey, his 81-year-old brother, whose decades of mayhem put him on the FBI’s Ten Most Wanted list.

Instead, William has said that he felt no obligation to help the authorities find Whitey. And in that context, William’s appearance in the courtroom yesterday was not a surprise. One friend said it was an example of the fierce loyalty of their old Irish-American neighborhood.

“You’ve got to understand something,’’ said Joseph S. Oteri, 80, a friend of William. “We’re South Boston people, and when you grow up in Southie, the cardinal virtue is loyalty. . . . And you think he wouldn’t be there today?’’

The Bulger brothers grew up in a bygone enclave of immigrant families from Ireland. Some friends believe their bond deepened after their father lost an arm in a rail yard accident, prompting Whitey to seek ways to provide for the family.

But the brothers still took divergent paths. William became a proud “triple eagle,’’ a graduate of Boston College High School, BC, and BC Law School, fond of quoting Latin and Greek texts.

Whitey was a teenage thief, who, to his mother’s horror, dated a dancer from the Old Howard, a burlesque theater in Scollay Square, according to William’s 1996 autobiography, “While the Music Lasts: My Life in Politics.’’

As Whitey’s involvement in crime grew, his brother was drawn into politics, the neighborhood’s historic path toward power and respect.

In 1960, while Whitey was at Alcatraz serving part of a 9-year sentence for bank robberies, William won his first election to the House, at 26.

A decade later, he was elected to the Senate and rose to the chamber’s presidency in 1978. Governor William F. Weld appointed him president of the University of Massachusetts in 1996.

Throughout William’s career, his accomplishments mounted as quickly as his brother’s crimes. But William always insisted he knew little of his brother’s life in the underworld.

In his autobiography, published a year after his brother fled Boston to avoid being arrested on racketeering charges, William argued that Whitey was the subject of “planted press stories, absurd rumors, wild exaggerations.’’

Whitey “is my brother and I love him,’’ he wrote.

That fealty eventually undid his career.

In 2001, six years after Whitey escaped, William testified to a grand jury that he had spoken to Whitey once, in 1995, at the Quincy home of a friend, a location arranged to avoid electronic eavesdropping.

“I do have an honest loyalty to my brother, and I care about him, and I know that’s not welcome news, but . . . it’s my hope that I’m never helpful to anyone against him,’’ William testified. “I don’t feel an obligation to help everyone to catch him.’’

A year later, William testified in Congress that he did not know where his brother was and had never aided him as a fugitive.

William’s cavalier attitude increased calls from Governor Mitt Romney and others for him to resign as the university president, which he did in 2003. “William gave up the presidency of UMass because he told the truth, that he wouldn’t help them get his brother,’’ Oteri said. “We grew up fiercely loyal to each other and hating rats — in that order.’’

William returned to South Boston with his wife, Mary, and largely vanished from the public eye, with the notable exception of fighting in court to preserve his nearly $200,000 annual pension.

That quiet ended abruptly Thursday morning. TV trucks and reporters swarmed his door. Whitey had been caught. But William stayed inside.

Yesterday, as Whitey landed under heavy guard on a chartered flight at Logan Airport, William climbed into a black SUV and crossed South Boston to the gleaming federal courthouse on the waterfront.

William arrived an hour early, two of his sons by his side. One of them, Christopher, was recently forced out as chief lawyer for the scandal-plagued state Probation Department.

At 4 p.m., a door creaked in courtroom 10. William looked up. Whitey, handcuffed, was led into the room.

Glen Johnson and Andrew Ryan of the Globe staff contributed to this report. Michael Levenson can be reached at mlevenson@globe.com. Follow him on Twitter @mlevenson.