Mass marking gay pride is back on 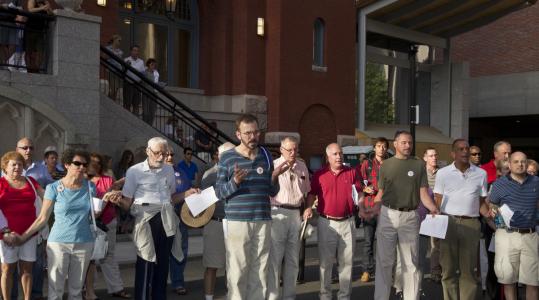 St. Cecilia parishioners prayed outside their Catholic church on Belvidere Street in Boston yesterday at a service with the theme “All Are Welcome.’’ (Matthew J. Lee/ Globe Staff)
By Laura J. Nelson and L. Finch Globe Correspondents / June 20, 2011

A Mass at St. Cecilia’s Church intended to celebrate gay pride month that sparked controversy and was canceled by the Archdiocese of Boston has been rescheduled for next month, church officials said yesterday.

“See you all on July 10!’’ said Rainbow Ministry president John Kelly, throwing his hands into the air at an alternative service held outside the church last night. An audience of nearly 250 people, from children in baseball uniforms to elderly couples in their Sunday best, applauded.

The Rainbow Ministry of St. Cecilia’s Church will host the Mass at 11 a.m. on that date.

Earlier this month, the church had announced in its bulletin that it planned to hold a Mass yesterday themed “All Are Welcome,’’ to support Boston Pride Month. But following a flurry of criticism from bloggers and conservative Catholics, the archdiocese canceled the Mass.

Members of the congregation led readings, hymns, and prayers from a podium set up on the sidewalk across the street from the church on Belvidere Street near the Berklee College of Music. As the evening sun flooded the block with warm light, some parishioners listened to the service gathered in a semicircle around the speakers, while others filled the shaded church steps.

One young woman could be seen listening from the third floor of a red-brick building next door, her head stuck out the window looking down on the scene. Police blocked off part of the street for the service.

“Remind us that what unites us is greater than what divides us,’’ parish council member Susan Donnelly said during the opening prayer.

“Amen!’’ someone in the crowd murmured.

St. Cecilia’s congregation has a large gay and lesbian population, many of whom arrived after the South End’s predominantly gay Jesuit Urban Center closed in 2007, parishioners said. Almost 200 members of St. Cecilia’s are active in its Rainbow Ministry, which hosts events for members and supporters of the lesbian, gay, bisexual, and transgender community.

Later in the half-hour service, in lieu of a homily, Richard Iandoli, vice chairman of the parish council, defended St. Cecilia’s acceptance of its gay congregation members, sometimes choking back tears as he looked across the makeshift lectern.

“To single out a group for pastoral care is neither unusual not unorthodox,’’ Iandoli said, citing special services planned for inmates, invalids, and college students. “We do not want to homogenize or hide our differences.’’

Iandoli also defended gay and lesbian churchgoers against the controversy that the canceled Mass has sparked.

“We are not immature or sinful because we are gay or lesbian or transgender,’’ Iandoli said. “We are children of God, just like everyone else.’’

Peter Meade of the Boston Redevelopment Authority, who is a member of the parish, led the group through a New Testament reading from the book of Matthew in which Jesus tells the weary to give their troubles to him.

“When this church says ‘All are welcome,’ they mean it,’’ Meade said. “They accept all comers, from all walks of life.’’

A line from the reading, “My yoke is easy and my burden is light,’’ was the theme of much of Iandoli’s message, as he reminded the congregation to support each other until the controversy passed.

Iandoli said members of the congregation’s parish council and the Rainbow Ministry hope to meet with Cardinal Sean O’Malley or other archdiocese officials about the controversy.

“This has been a very hurtful few weeks, but there is a beautiful opportunity that has come out of it,’’ Iandoli said.

The Rev. Rick Walsh, associate director of the Paulist Center nearby, said he attended the service to show his solidarity for a congregation that was struggling with a hot-button issue.

“They are our neighbors,’’ Walsh said. “We have a sizable gay and lesbian population, too, and I want to show my support.’’

The Rev. John Unni did not attend the prayer service.

Mayor Thomas M. Menino’s office had scheduled an appearance by the mayor at the service but he did not come. Christopher Loh, a spokesman for Menino, said the mayor probably had a scheduling conflict, but plans to attend the July 10 Mass.

The archdiocese’s actions — despite the rescheduled Mass — should serve as a wake-up call for Catholics to “come out of the closet’’ in support of fellow gay parishioners, said Shawn Fiedler, 22, of Allston.

“It saddens me that the church follows bloggers and not the Holy Spirit,’’ Fiedler said, a silver cross hanging around his neck.

“We’re not going to move forward that way.’’

Before the congregation recited the final prayer together, as the soft evening light began to fade, Iandoli emphasized again the theme “All are welcome.’’

After the service, Carmen Valadao, 74, of Canton, sat on the steps of the church, wearing an “All Are Welcome’’ pin. She said she has belonged to St. Cecilia’s for four years, traveling into the city every weekend since her husband died, to visit her daughter and to attend Mass there.

“According to what we read in the Bible, we are all brothers and sisters in Christ,’’ Valadao said. “This is one of the best churches in welcoming people. It’s a good thing we did this today.’’