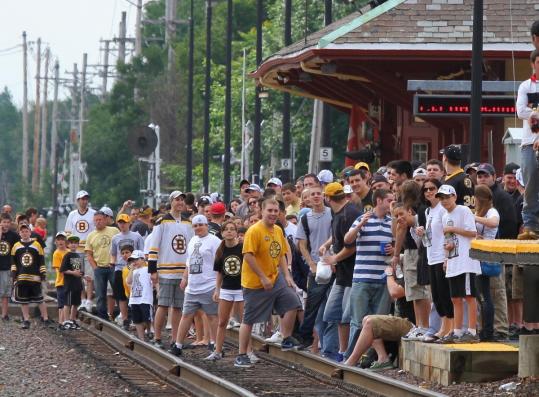 A mass of Bruins fans were ready at 8:40 a.m. yesterday as the train approached the commuter rail station in Reading. (Brian O’Connor for The Boston Globe)
By Christopher J. Girard Globe Correspondent / June 19, 2011

Since Thursday’s exuberant announcement of the parade celebrating the Bruins’ championship win, officials repeatedly urged fans to take the MBTA into downtown Boston. But yesterday morning some of the record-setting number of commuter rail riders reported difficulty getting to the city — and others never made it.

An unprecedented 120,000 people rode the commuter rail inbound yesterday, almost double the 67,000 riders that ride in on a typical weekday, T spokesman Joe Pesaturo wrote in an e-mail. The commuter rail ran “super-sized’’ trains to increase capacity, he said, and ran 21 extra trains.

Pesaturo said the MBTA was “absolutely’’ prepared, employing every train that was not undergoing maintenance and every train crew.

“If we hadn’t have been prepared, we would not have been able to carry 120,000 people,’’ Pesaturo said. “When we got reports of people still on platforms, we sent trains out to get them. In some cases, people didn’t wait for the trains.’’

But some disappointed fans said the commuter rail was overwhelmed and unprepared.

Michael Chefitz, his son, and his son’s friend, both 12, tried to take the commuter rail from Salem to North Station, but the 9:20 a.m. train they wanted to get on “barely picked up anyone.’’

“The electronic sign [on the platform] of course provided no info,’’ Chefitz, of Salem, wrote in an e-mail. “People were furious.’’

At one inbound stop, the Swampscott station, a large crowd, including families with small children, was stranded after the 9:25 and 9:50 trains did not stop, presumably because they were full, Will Bachner wrote in an e-mail.

At the Mansfield commuter rail station, Charles Woods of Mansfield abandoned his hopes to attend the rally after he was unable to board two full trains.

“There was no information to be had. We were not alone,’’ Woods, 30, wrote in an e-mail. “About 50 or so other people of different age groups were walking away with us.’’

Karen Angelo arrived at the Wilmington commuter rail station 45 minutes before the 9:15 a.m. train rolled past, she wrote in an e-mail. Within the next half hour, two more trains came through without stopping, and Angelo went home, she wrote.

“Seems like they could have hired a few more people, put on a few more trains, and still made some money,’’ Angelo wrote.

At about 2:30 p.m., Ashland resident Evan Shapiro said, T employees directed those who wanted to ride the commuter rail outbound from Back Bay Station to wait in a “very enclosed area’’ and provided no information on how long they would wait.

“It almost got to the point where someone could have been trampled,’’ said Shapiro, 45. “It was really, really dangerous.’’

Eventually, officials moved the crowd to a larger area, Shapiro said. At 2:30 p.m., the crowd was still waiting for the 1:10 p.m. train to Providence, he said.

Pesaturo said he had no reports of “significant problems’’ on the subway.

“All day it looked like a typical weekday rush hour on the subway,’’ he said.

Subway rides were not entirely without snags, but some T riders were able to devise strategies to get around them.

Dan Cagen of Cranston, R.I., wrote in an e-mail that about 11 a.m., he was “stuck’’ at Reservoir Station among crowds that watched trains rush past without stopping.

Cagen walked to nearby Cleveland Circle Station, where he caught a train on a different branch of the Green Line and rode downtown — just in time to watch the duck boats roll past.

Christopher J. Girard can be reached at chrisjgirard@gmail.com.