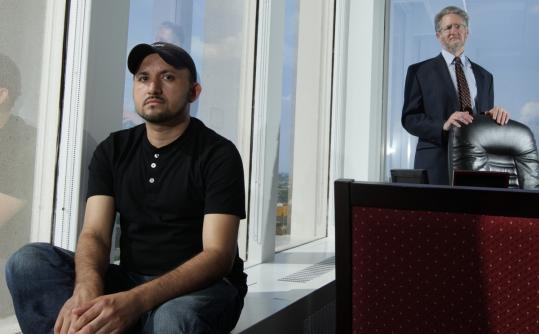 Paul Brasco, president of the Waltham City Council, and a Waltham police officer are at the center of an internal affairs investigation that found they visited one of Brasco’s properties over the winter to identify tenants the councilor said he is trying to evict.

A tenant, Edgar Gonzalez, 33, says that he was improperly threatened with deportation during the Feb. 17 visit and that his civil rights were violated. He is asking US Attorney Carmen M. Ortiz’s office to investigate.

Brasco tells a sharply different story, saying that Gonzalez has no lease and is squatting on his property and that at no time did he and the officer threaten Gonzalez with deportation.

He said he told Gonzalez that he would be served with a notice of eviction within 24 hours.

The police officer, identified by police as Paul Tracey, may face disciplinary action after the internal investigation found he appears to have violated department policy by accompanying Brasco.

Gonzalez said through an interpreter yesterday that he had stopped paying rent because of malfunctioning lighting and heating in the apartment. He said that he is Guatemalan and that he has lived in Waltham for 18 years, but he declined to comment on whether he is a legal resident.

Police investigated the incident and consulted with Middlesex District Attorney Gerard T. Leone’s office after Gonzalez filed a complaint with the city.

In a letter to Gonzalez dated June 6, police said that no criminal charges will be pursued against Brasco or Tracey.

But Waltham Detective Lieutenant Steven Champeon stated in the letter, which was obtained by the Globe, that the investigation found that it appears that Tracey “violated the Waltham Police Department policy, rules and regulations, and may be subject to disciplinary action.’’

Champeon said yesterday that the incident is an ongoing personnel matter and that no decision has been made regarding possible disciplinary action. Champeon said he could not comment further.

According to Champeon’s letter, the investigation found that Brasco had contacted Tracey directly for assistance identifying the occupants of the building, at 89 Vernon St.

When Gonzalez went to the police station to inquire about the visit after Brasco and Tracey left his apartment on Feb. 17, Gonzalez said police informed him that no officers had been dispatched to that address that night.

Brasco said he called Tracey because the officer is his neighbor and friend. Brasco said it was late in the evening, and he wanted to find out who was on his property so he could follow through with eviction proceedings. When his property management company could not send someone with him to the apartment, Brasco said, he asked Tracey, who was on duty, to meet him there.

Brasco is serving his sixth term on the City Council and is in his second year as council president, but he said that to say he abused his authority by calling Tracey is “far fetched.’’

Brasco recently abandoned his campaign to run for mayor, but he said the investigation had no influence on his decision.

According to Champeon’s letter to Gonzalez, the district attorney’s office determined that the actions of Tracey and Brasco did not rise to the level of a criminal civil rights violation or any crime.

Jessica Pastore, a spokeswoman for Leone’s office, said the district attorney’s Public Corruption Unit did investigate Tracey and Brasco and found that there was not enough evidence to sustain a conviction beyond a reasonable doubt. Pastore said she could not comment further about the investigation because it did not lead to criminal charges.

But Tyler Fox, an attorney representing Gonzalez, said he does not believe the district attorney’s office is in a position to conduct an impartial and objective review of the case because the office routinely interacts with Waltham police.

In a letter dated June 14, Fox and Gonzalez requested that the US attorney’s office investigate the matter.

Fox said there are a number of unanswered questions in the case, including why police said Brasco accompanied Tracey to Gonzalez’s apartment, even though Gonzalez thought both of the men who had visited him were police officers.

Ortiz’s office did not respond to a request yesterday asking if the letter had been received and if the complaint would be investigated.

Brock Parker can be reached at Brock.globe@gmail.com.