Artists' surprise exhibit timed to one 40 years ago 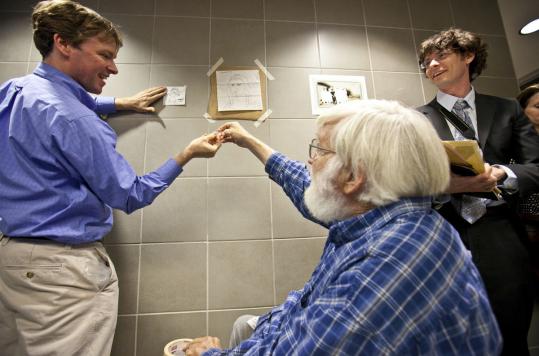 Rob Guillemin (left) hung some of his father Bob’s (center) artwork in the men’s room of the MFA as curator and organizer Greg Cook looked on during their surprise exhibition last night. (Aram Boghosian for The Boston Globe)
By Geoff Edgers Globe Staff / June 16, 2011

At about 7:03 last night, Chris Krohn, a tourist from Santa Cruz, Calif., did a double take as he entered a men’s room at the Museum of Fine Arts. There were crowds of people gathered outside, in the doorway and inside: men, women, some with cameras. “What bathroom is this?’’ Krohn asked.

A woman chuckled. She knew what was happening. A group of about 20 artists had sneaked into the MFA with their works, plastered them on the walls, and were holding an impromptu reception. The 19-minute exhibit — it was broken up by museum security after being discovered — drew close to 75 people to the temporary bathroom galleries.

Greg Cook, the organizer of the show, is a freelance arts writer and artist in his own right. Cook, 38, has also pushed his cause, “Yokelism,’’ on his blog, The New England Journal of Aesthetic Research, and recently mounted a successful campaign to get the MFA to restore its local artist award, the Maud Morgan Prize.

He came up with the idea for the exhibit-slash-event after hearing about “Flush With the Walls,’’ held exactly 40 years ago. That show featured six artists who were frustrated with the museum’s lack of commitment to contemporary and local art. Printing invitations on toilet paper, they sneaked into a men’s room at the MFA and installed their works to, as Boston After Dark’s Alicia Faxon wrote, “point out that the men’s room seems to be the only place in the Museum of Fine Arts that an exhibit of contemporary local artists can be seen.’’

The artists recruited by Cook were not quite so frustrated.

“My first thought was, here’s another opportunity to show at the MFA,’’ said painter Laura Chasman, who won the Maud Morgan prize in 2001 and who attended the “Flush With the Walls’’ exhibit as a 24-year-old back in 1971. “I see this as playful and an anniversary. I don’t see this as hostile. I see it as positive. I see it as energetic and a way of reigniting that rebellious show that took place.’’

For his part, Cook talked of the timing of the event. He said Wednesday was perfect because, after 4 p.m., admission fees at the MFA are voluntary and would make it easier to pull off the show. He seemed unconcerned with the conflict with the Stanley Cup Finals and more excited about the larger, historical context. In September 1971, after “Flush With the Walls’’ took place, the MFA created its Department of Contemporary Art. This September, the MFA will open the Linde Family Wing for Contemporary Art.

“This is a real opportunity, in a fun and celebratory way, to look at the past, acknowledge how far we’ve come, and also consider the room we have to grow,’’ he said.

As the scene developed last night, the museum’s crowded new courtyard took on the feel of a Robert Ludlum novel. Cook, shaggy-haired and with a package of prints tucked in his suit pants, appeared at one end. Jim Manning, Amber Day, and Rachelle Beaudoin, representatives of the Institute for Infinitely Small Things collective, were across the way, finishing a snack in the cafe. Other artists milled about the lower landing near the bathrooms, on one end of the museum’s new courtyard. They waited for the clock to strike 6:45. That is when they entered the bathrooms and went to work.

“I would go there, but I think there might be privacy issues,’’ said new-media artist Deb Todd Wheeler, standing near the sinks in the men’s room, but deciding not to approach the urinals. “Want me to do it, Mom?’’ asked her son Lucas, 12.

Bob Guillemin, better known as Sidewalk Sam, watched from his wheelchair as his son, Rob, installed his work.

Jo Sandman, like Guillemin, a participant in the 1971 event, praised the organizers and artists, but said this gathering felt different. “Ours was a guerrilla thing,’’ she said. “We spent literally weeks planning it. This is a wonderful action. It’s just not as dangerous as what we did.’’

At 7:14 p.m., having received reports of the gathering, three security workers arrived on the scene. They waited respectfully as Cook thanked the assembly for coming. When he was done, the security workers told people to disperse because they were blocking the emergency exit. Then they took down the art.

Cook, for his part, said he had no complaints with how the MFA handled the event.

In fact, the artists did get one last laugh. In the men’s room, long after everyone had gone, a fake plaque commemorating the arrest of a transgendered individual named Dean Spade, remained attached to the wall. It looked too much like the real thing for security to notice.

On the plaque, the prankster-donor was listed: The Institute for Infinitely Small Things.