Priest says all are welcome in his church 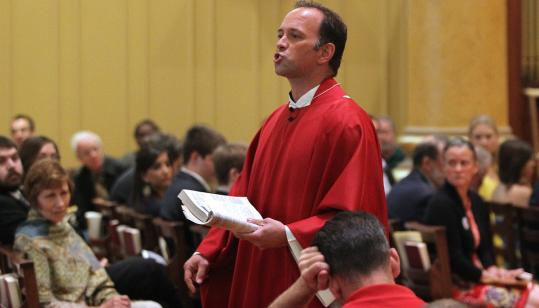 Sunday Mass at St. Cecilia’s Church in the Back Bay brought the first standing ovation any parishioner could remember.

During the first Mass since the Archdiocese of Boston canceled one planned for next weekend in support of St. Cecilia’s gay and lesbian churchgoers, the Rev. John J. Unni preached a fiery message of unconditional love and what he called “acceptance of all.’’

“You are welcome here, gay or straight, rich or poor, young or old, black or white,’’ Unni said as he paced up and down the center aisle. “Here, you all can say, ‘I can worship the God who made me as I am.’ ’’

Unni finished his homilies at the 9:30 a.m. and 11 a.m. Masses to thunderous applause.

“This parish is a great example of people who are civil and exhibiting a real fellowship,’’ said Terrence C. Donilon, a spokesman for the archdiocese, in a phone interview yesterday. “But that doesn’t mean we can be put in a position where we look like we’re endorsing Gay Pride activities.’’

Unni, who has been at St. Cecilia’s for seven years, said the Mass has been postponed indefinitely. He said he will discuss the goals of the “All Are Welcome’’ Mass with the parish and address fears about the service or recent backlash.

St. Cecilia’s congregation has a large gay and lesbian population, many of whom arrived after the South End’s predominantly gay Jesuit Urban Center closed in 2007, parishioners said. Almost 200 members of St. Cecilia’s are now active in its Rainbow Ministry, which hosts events for members and supporters of the LGBT community.

Members of the Rainbow Ministry first suggested the Mass to Unni six to eight weeks ago, he said, and he told them yes, “not knowing what would happen,’’ he said.

Instead of the Mass, the Rainbow Ministry will hold a sidewalk prayer service next Sunday at 6 p.m., with readings and reflections from laypeople, said Richard Iandoli, vice chairman of the parish council.

Rainbow Ministry member Michael Skully expressed his frustrations with the archdiocese and said he “fully expected to be standing in front of locked doors’’ next Sunday.

But Donilon said the archdiocese has no objection to the service, especially if it isn’t held inside.

“This should not be about conflict,’’ Donilon said. “The teachings of the Catholic Church are set in stone, but that doesn’t stop us from loving people from different walks of life.’’

Some churchgoers speculated after the 9:30 a.m. Mass that Unni would be less outspoken at the 11 a.m. service, which Bishop Robert F. Hennessey attended as part of Confirmation Sunday. Instead, Unni gave a similarly strong homily, then addressed Hennessey directly.

“Like the bishop said, good love always requires sacrifice,’’ Unni said. “We are being called to do not what is easy, but what is holy.’’

At one point, he called the conservative bloggers who criticized the Mass “unbelievably hurtful’’ and said he was trying to “not just succumb to being told what to do.’’

“We are not this renegade, crazy, liberal church,’’ Unni said, to smiles and nods from the pews. “We’re just Christians trying to live the gospel.’’

Rainbow Ministry president John Kelly emphasized the importance of esprit de corps at the end of a week they said has made them question their allegiance to the Catholic Church. More than 200 gay and straight members of the congregation wore buttons that displayed a cross, a rainbow, and the phrase “All Are Welcome.’’

“I went straight to the table to pick one up,’’ said James Pyke, a parishioner from the South End. “I believe firmly in the teaching ‘Love your neighbor,’ and it’s important to support our sense of community here.’’

Some at yesterday’s Mass, like Dave Macaulay of Salem, said they had tried many churches before they felt welcome at St. Cecilia’s.

“It’s already hard to be a gay man in the Catholic Church,’’ said Macaulay, who wore his “All Are Welcome’’ button upside-down to protest the archdiocese’s decision. “But now, I’m told I’m not welcome?’’

Unni told the congregation he had had similar feelings of frustration and doubt since the archdiocese’s announcement Friday. He left the congregation with two reminders: Bless those who curse you, and turn the other cheek.