At Carson Beach, sand covers the past 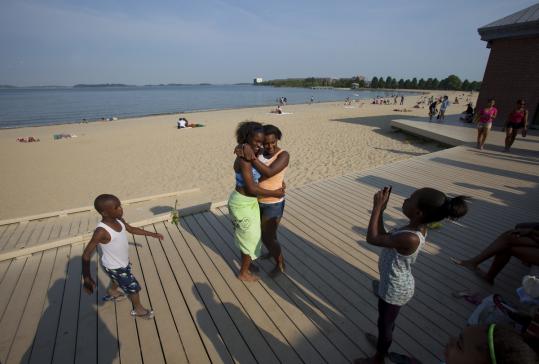 Leasher Davis stood with her hands on her hips and her feet planted in the sand as six children dug and chattered around her.

The youngsters — two of Davis’s grandchildren and four of their cousins and friends — were excavating a miniature pond and piling fresh sand onto a budding sandcastle. As the warm, humid day hung around them and the waves lapped on Carson Beach, Davis, 48, kept watch through dark-brown sunglasses.

There was a time when the children could not have played in peace at this South Boston hub, Davis said. Now, she takes them here almost every other day from her Savin Hill home.

“I try to explain to my grandchildren that we’re blessed to be able to sit out here,’’ Davis said, recalling the racial tensions when African-Americans began coming to Carson Beach in the mid-1970s, around the time she was being bused to South Boston High School. “We are blessed to live among each other in South Boston.’’

The beach crowd is more diverse and peaceful than when they started coming here, Davis and other beachgoers say. Despite a melee that erupted after more than 1,000 teenagers gathered at Carson Beach on a scorching Memorial Day and the stepped-up police presence that followed, they still love this neighborhood hub for the sand, fun, and community they find there.

“We’re just here to enjoy the sun, like everybody else,’’ said Oby Ojimba, a 20-year-old student at Salem State University, as his friends danced to the pulsing reggae coming from a boombox. “We aren’t looking to cause trouble, but we just wish the cops would get that.’’

As temperatures heated up in some areas of Boston this week, State Police deployed more troopers, expecting large crowds at Carson Beach. But the crowds did not appear Wednesday or yesterday, State Police spokesman David Procopio said.

“It’s been quiet since that weekend we had the huge crowd,’’ Procopio said. “We have no problems with large crowds coming to the beach, as long as they do so peacefully.’’

Forty people were injured, and 10 were arrested as some in the two groups threw rocks and bottles at each other and exchanged racial threats. Racial strife continued at the beach for the next few years, but there have been few incidents since then.

Today, people who have been relaxing at Carson Beach for decades remain loyal to the community beach.

James Gillietti, 55, drove the 21 miles from Whitman to spend yesterday afternoon jogging along the sand and catching up on some reading: Bike magazine and a Sandra Brown thriller. He grew up in Dorchester and came to Carson Beach as a child.

“It’s clean, and a lot of people here are young and active,’’ Gillietti said as he leaned back on a shaded bench.

Like other sunbathers interviewed, Rosmery Lachapel, 21, said she was not worried about further fights at Carson. With her 1-year-old son close by, Lachapel and some friends were sunning themselves along the sandy stretch because they live nearby and Carson is the most convenient beach.

But Davis lamented the need for the state troopers standing 50 yards away.

“That saddens me to see them,’’ she said, waving toward the officers. “I came here last summer, and it was all free.’’ She still plans to return often, she said.

Carson Beach experienced a revival in the mid-1990s, after state officials spent $30 million to clean up and refurbish a 13-mile stretch of coastline from Winthrop to Quincy, which included Carson Beach.

These days, a heat wave such as the one Boston experienced over Memorial Day weekend and this week can bring hundreds to the beach on any given day.

“This is where everybody is,’’ said Bianka Dona, an 18-year-old freshman at the University of Massachusetts Boston who had spent Wednesday afternoon sunbathing, swimming, and snapping photos with her younger sister and some friends.

“We came ’cause it was really hot,’’ said her sister, Jhameyka Delisne, 14, playing with sticks she had picked up on the sand. “It’s a summer thing to do.’’

For some, the beach is more; it is almost a way of life.

Near the sand yesterday afternoon, John Shaughnessy, 57, was minding his two boxers, Nessie and Shag. As the dogs dug in the sand, Shaughnessy said he had grown up in South Boston and spent the past five decades coming to Carson Beach. He even learned to swim nearby.

A few yards away sat Mickey and Mary Burke, who said they have owned a house a block away from the beach for 30 years and live next door to former mayor Raymond L. Flynn. Mary Burke, 61, a program supervisor at the nearby L Street Bathhouse, comes to the beach nearly every day with friends or relatives. “It’s the best place in the world,’’ she said, unwrapping some leftover Easter chocolate.

“We’ve seen a lot of change here,’’ Mickey Burke, 63, said, looking out over the sand and the water. “Change for the good.’’