From most diverse to least, neighborhoods share sense of unity 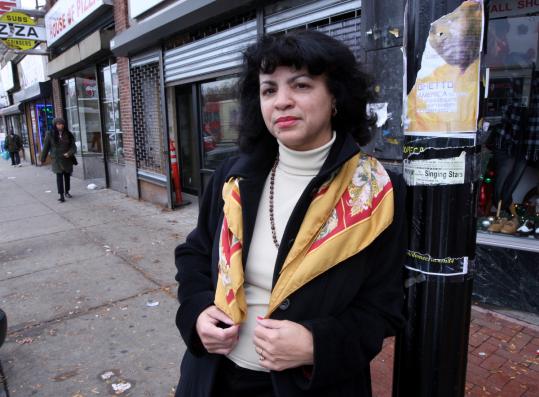 Eugenia Smith has lived since 1991 in West Broadway Housing Development in South Boston. (Aram Boghosian for The Boston Globe)
June 5, 2011

Robert Jenkins tried living in other parts of Boston but never felt more at home than he does in Mattapan.

It’s still a “vibrant community,’’ he said, but things have changed in the 42 years he’s lived there.

Back then, theaters and restaurants lined Blue Hill Avenue near Mattapan Square, many owned by local Jewish residents. Jenkins said, “You had everything in Mattapan.’’

Today, those businesses are gone, replaced by dollar stores and a wig shop. It’s rare to see anyone white shopping on Blue Hill Avenue or waiting for the 28 bus from Mattapan Station.

According to the 2010 Census, more than 90 percent of residents in this neighborhood bordered by Blue Hill Avenue, Almont Street, Harvard Street, Cummins Highway, and River Street were black or African-American. Less than five percent were white.

The diversity index showed that residents there have a 33.5 percent chance of living next to someone of a different race, almost 20 points below the average for Suffolk County.

Lillie Searcy, former executive director of Action for Boston Community Development’s Mattapan Family Services Center, said that recently, immigrants have moved in alongside African-American families that have called Mattapan home for years. Like Jenkins, she too saw white residents leave the neighborhood and take their businesses with them.

Jenkins agrees. At different points, he’s moved out of Mattapan, renting places in other parts of the city.

Something always drew him back.

“I just didn’t get that flavor — that feel —that it was community,’’ he said.

Kelsey Giannone and Katherine Graham grew up playing in the backyards of a South Boston neighborhood where they knew everyone and everyone knew them.

“You always know your neighbors. You know everyone on your block,’’ Giannone said, as she and Graham waited on customers at The Sidewalk Cafe at M and East Fourth streets.

The City Point area, between L and N streets running from East Broadway south to the waterfront, is 98.8 percent white. Residents there have a 3.4 percent chance of living alongside someone who is racially different from them, according to the diversity index, making it the whitest neighborhood in Suffolk County.

The closeness of the community has high school student Giannone and college student Graham sure they’ll remain in South Boston for life.

“We have traditions, community. It’s always the same. It changes, but it stays the same,’’ Giannone said.

When told about the area’s racial composition, residents interviewed said they weren’t surprised.

As a result of past issues such as busing in South Boston, “people of color have not felt comfortable in the area,’’ explained Joanne McDevitt, chair of the City Point Neighborhood Association.

“City Point is a stable neighborhood with a lot of people who are second, third, fourth generation. The kids leave, but then come back,’’ she said.

When the Portuguese-American Smith and her family settled into an apartment at 72 Crowley Rogers Way, they were greeted by gunshots, broken windows, and verbal abuse that she believes was racially motivated.

The Boston Housing Authority began integrating all-white housing developments like West Broadway in 1987. Despite an initial bout of violence and tension for the first minority families, more joined them, until minorities outnumbered white tenants more than two to one.

Now, Smith said, she has found camaraderie with tenants of varied racial and ethnic backgrounds.

“We help each other,’’ she said, later adding, “If somebody’s sick, somebody else is cooking soup for them. If somebody’s kid is outside, somebody’s outside watching them.’’

Recent census data reveals that the West Broadway Housing Development — a square bounded by B Street, West Broadway, D Street, and West Seventh Street — is the most racially diverse neighborhood in Boston.

According to the diversity index, West Broadway tenants have an 84.5 percent chance of living next to someone of a different race.

While many residents said races mix without fanfare at West Broadway, the reality of racial diversity isn’t always harmonious. There is occasional vandalism and, some say, self-segregation.

Shannon McQueen, 30, a white woman who has lived her whole life at West Broadway, said it has grown into its diversity after being integrated in 1989.