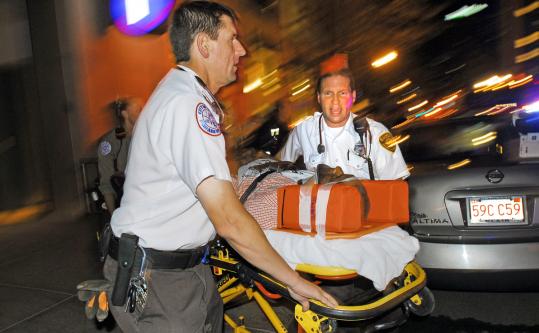 Both the Massachusetts Port Authority and Boston Emergency Medical Services Department have reinstated Richard G. Covino to his two full-time jobs as Massport firefighter and Boston paramedic, but under schedule restrictions likely to force him to relinquish one of the jobs.

EMS Chief James W. Hooley said yesterday that Covino will no longer be allowed to swap shifts with other paramedics, the practice at both agencies that made it possible for Covino to rearrange schedules so that he could work 100-hour weeks and earn about $200,000 a year. In at least five instances last year alone, Covino was paid for working both jobs at the same time, according to payroll records.

“Obviously, I think, he’ll have to pick one job,’’ Hooley said. “I can only imagine that will be the case. We’re not trying to make it easy for him to keep both jobs.’’

Covino, a lieutenant with Boston EMS, could not be reached for comment yesterday. In April, through an EMS spokesman, he declined to be interviewed.

Massport, which had suspended Covino without pay April 14 after Globe inquiries about his work schedule, decided to let the him keep his job, but docked him five weeks pay for leaving mandatory training shifts early on two occasions last year so he could start his 3 to 11 p.m. shift with Boston on time.

Boston EMS placed Covino on leave with pay on April 29. But he was returned to duty on May 14 after other paramedics said they had covered for him for short periods of time, an hour or more, on those dates that the two jobs appeared to overlap. Several days last year, for example, Covino was paid for an EMS shift that began at 3 p.m., even though he was clocked in at his Massport job until 4 p.m. or later.

Hooley also said he has put a stop to that informal practice. EMS personnel who are going to be late for work will now need formal permission.

The Globe reported on May 1 that the overlapping shifts were part of a Herculean work schedule for the 50-year-old Covino. Over the last four years, he worked about 90 days a year in overtime shifts, in addition to regular shifts at the two jobs. To do both jobs, the Globe found, Covino often worked back-to-back shifts at both agencies, sometimes working 48 hours or more with only enough time to commute between jobs.

That would not have been possible but for the longstanding practice of shift-swapping at many public safety agencies. At EMS, for example, the 350 paramedics and EMTs work four days on and two days off. But many of them trade shifts, sometimes working back-to-back shifts, as Covino often did, to accommodate outside jobs.

At EMS, there has been no limit on such swaps. At Massport, firefighters are limited to one shift swap a week. Covino, however, often borrowed a few hours here and there, often leaving his 8 a.m. to 6 p.m. Massport shift shortly after 2 p.m. to make his 3 p.m. shift at EMS.

In April, Massport Fire Chief Robert J. Donahue said he moved to curtail that practice, saying that any swap exceeding two hours would count as the one swap permitted each week. Yesterday, a Massport spokesman, Matthew Brelis, said that change has not yet taken effect. Covino returned to his Massport position May 23.

Massport firefighters work two 10-hour day shifts and two 14-hour night shifts over six days and then have three days off. Without regular shift-swapping at Massport and with Covino’s EMS swaps ended, it would appear to be impossible for him to keep both jobs. Hooley has banned swaps only for Covino.

An unregulated and longstanding practice of shift-swapping at the Boston Fire Department is now being investigated by the state Public Employee Retirement Administration Commission after a Globe report in January that some Boston firefighters had borrowed hundreds of shifts from other firefighters, with no record they ever covered the shifts of colleagues who had worked for them. The commission is looking into whether some firefighters have received pension credit for time they did not work.

How Covino ended up with two high-stress public safety jobs is itself perplexing. He has been at Boston EMS since 1984. Starting in 2000, he took on full-time firefighting jobs, too, first in Cohasset and then in Gloucester. He was hired by Massport in 2006, at age 45.

Donahue, who was not available for comment yesterday, told the Globe in April that he had assumed when he hired Covino that he would be quitting his EMS job and learned only months later that he had not. EMS, for its part, initially said it was only “anecdotally’’ aware of the Massport job. Neither agency has any restriction on outside employment, though Massport has now adopted an agencywide policy prohibiting second, full-time jobs for new hires.

Hooley said yesterday that he hopes to negotiate a policy in current union talks that would require employees to receive permission to have second jobs.

Samuel R. Tyler, president of the Boston Municipal Research Bureau, a business-supported watchdog agency, applauded Hooley for taking steps “so this one situation cannot be repeated.’’

But Tyler added: “To have one person filling two stressful public safety jobs makes no sense at all, and it ought to be prohibited.’’

Walter V. Robinson can be reached at w.robinson@neu.edu.

Correction: Because of an editing error, this story about Richard Covino’s reinstatement as a full-time employee at both the Massachusetts Port Authority fire department and Boston Emergency Medical Services misstated the agency he serves as a lieutenant. He is a fire lieutenant with Massport.