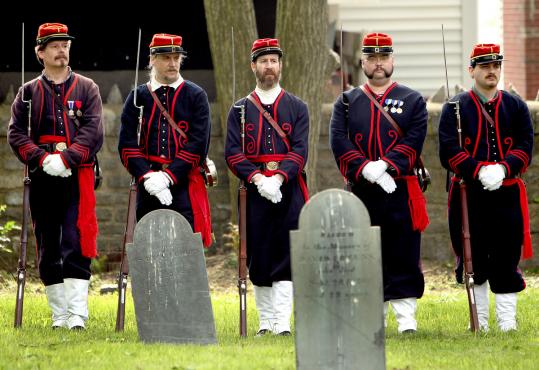 REVERE — Deep in a quiet residential neighborhood yesterday, Civil War reenactors carrying muskets stood by in a leafy, well-tended burial ground as police officers fired a rifle salute honoring local veterans, some of whom fought before the Revolutionary War.

About 200 people attended the event, held in commemoration of the 150th anniversary of the Civil War, standing among time-battered headstones at Butler Street’s Rumney Marsh Burial Ground, which holds graves of veterans from wars going back to the late 1600s and spanning more than two centuries — the King Philip, Revolutionary, 1812, and Civil wars, according to a statement from event organizers. The first veteran was buried there in 1693.

Among those interred on both sides of the brickway that cuts through the small fenced-in graveyard are 13 slaves with unmarked graves; 11 soldiers from Revere who fought in the Civil War; the son of John Winthrop, Massachusetts’ first governor; and a Civil War soldier who was awarded the Congressional Medal of Honor, according to the statement.

“This burial ground is a big part of our history,’’ said Robert F. Upton Jr. of Revere. “Some of the streets in Winthrop and Revere share the names of the ones on these graves.’’

Some residents said they are proud of the cemetery, but that its ties to slavery cast a somber shadow on its legacy.

“When they read the names of the slaves and said they were ‘property of’ so-and-so, it was really hard to swallow,’’ said Kathleen Heiser of Revere.

The Rumney Marsh Burial Ground Restoration Committee is leading an effort to preserve the city-owned cemetery and to properly mark the graves of the slaves buried there.

The committee has raised a little less than half of the $40,000 to $50,000 it needs for the project, said Ira Novoselsky, Revere City Council vice president and committee member. The burial ground has a new stone sign that shares some of its history and a large rock surrounded by flowers that serves as a monument to the deceased; soon it will also have improved walkways and rehabilitated headstones, said committee member Lona Frongillo of Revere.

Middle and high school students provided an overview of Civil War history at the ceremony, while a young boy in a Lincolnesque stovepipe hat delivered the Gettysburg Address, which the crowd rewarded with applause.

“Though we can never fully repay them for their sacrifice, we can keep these brave soldiers in our hearts and thank them for the freedom and opportunity we have today,’’ said DeLeo.

In closing, the crowd sang the “Battle Hymn of the Republic.’’

A Salem-based bayonet unit that fought in the Civil War inspired some of the reenactors.

Paul Kenworthy of Saugus said he had five ancestors who fought for the North at the Battle of Gettysburg. Along with four fellow reenactors, Kenworthy sewed his Algerian-inspired uniform, which was popular in the Civil War era, and ordered his model musket from a maker in Italy.

“It’s important to re-create the activity and keep the history alive,’’ Kenworthy said.

Christopher J. Girard can be reached at chrisjgirard@ gmail.com.