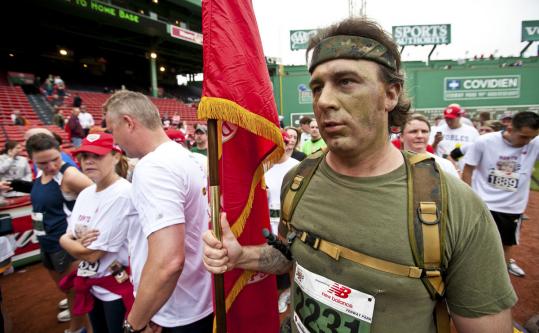 Newton firefighter and Marine veteran Chris Lessard was at Fenway Park with other runners after finishing yesterday’s race. More than 2,000 runners took part in the second annual event. (Aram Boghosian for The Boston Globe)
By Stewart Bishop Globe Correspondent / May 23, 2011

On a cool, overcast morning at Fenway Park yesterday, 33-year-old Meredith Griffin paid tribute to seven members of her family who have fought in the Iraq war — especially to the one who never made it home.

She joined more than 2,000 runners, including almost 300 active duty military service members, to raise money to support veterans returning from Iraq and Afghanistan with combat stress or brain injuries.

Griffin’s cousin, Army Captain Anthony Palermo Jr. of Brockton, was killed in the line of duty in Baghdad in April 2007. Yesterday she ran the race wearing a shirt bearing Palermo’s photo, along with the dates of his birth and death.

“It’s really kind of a labor of love to run today and to really be involved in this cause,’’ said Griffin, of Raynham, as she stood in front of the dugout after the race. “This is in honor of Tony and in honor of my other relatives that are still with us and that are still struggling.’’

Griffin said many of her family members who have served have been diagnosed with posttraumatic stress disorder, a debilitating anxiety condition that often affects soldiers exposed to severe trauma.

“A lot of them, the ones that came home, have been diagnosed with PTSD. There’s a lot of emotion they don’t share with you, a lot of mood swings, fear, and mixed emotions. It’s hard to deal with all of that,’’ Griffin said. “We have a pretty amazing family and a great support group, but not everybody’s that lucky. “

Organizers said the 5.6-mile run — which began on Yawkey Way, stretched over the river to Memorial Drive and ended with runners crossing home plate inside the park — raised an estimated $2.6 million for the Red Sox Foundation and Massachusetts General Hospital Home Base Program. It was the second annual Run to Home Base, and participants were required to raise $1,000.

Chris Reynolds, 55, a deputy chief with the Holyoke Fire Department, said he saw the run as a good way to help veterans and maybe touch a little Fenway glory at the same time.

Reynolds said he and his family raised $2,000 in support of the cause. Many of his fellow firefighters, he said, have served in Iraq and Afghanistan.

“Many of the guys getting on [the department] now are all veterans; several of them keep getting deployed every year,’’ Reynolds said. “They’re risking their lives to support the way we live. It’s very important — that’s why we’re here.’’

The winner of the race for the second year in a row was Peter Gleason, 33, of Millbury.

Gleason said he’s happy to be able to raise money in support of the troops.

“Most road races aren’t this fun, they don’t have this kind of backdrop,’’ Gleason said, gesturing toward the Green Monster. “It was a great experience last year and even better this year. I’ll keep coming as long as they keep having it.’’

Michelle Obama sent a taped greeting from the White House that was played on the main video screen above center field.

“The Home Base Program is helping our veterans and their families to get the clinical and support services they need and they’ve earned,’’ Obama said. “Thanks again to Red Sox Nation for stepping up to the plate when it counts.’’

Brown, who also ran the race, said in an interview after the run that a strong support system for returning veterans is essential.

“Obviously it’s badly needed; you’ve seen the statistics,’’ the senator said. “I know we all care very deeply about the men and women that are serving and there’s a lot of positive things being done in Washington about it, and in the state, too. Governor Patrick, and his team on veterans’ issues, is second to none in the country.’’

As for the thrill of crossing home plate in the iconic ballpark?

Stewart Bishop can be reached at sbishop@globe.com