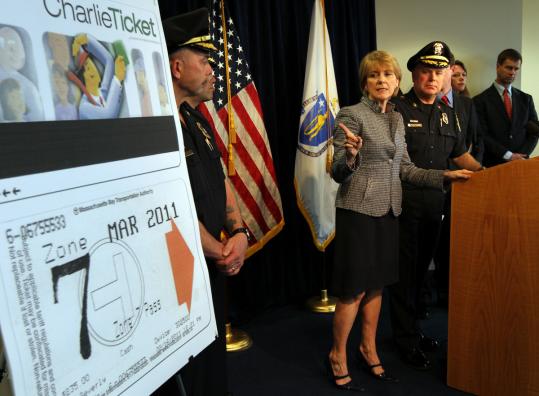 Authorities said yesterday that they had uncovered a massive scheme to print and sell thousands of unauthorized MBTA passes, the largest fare-evasion case in T history and one that has cost taxpayers millions of dollars over the past four years.

Andres M. Townes of Revere is accused of using his job with an MBTA contractor to manufacture “ghost passes’’ that looked and worked like the real thing, selling them on the side and pocketing the cash.

“They were like the best counterfeit money you could have,’’ Attorney General Martha Coakley said after Townes was arrested yesterday following a two-month investigation that began only after one of his alleged customers accidentally ran one of the passes through his washing machine and a conductor stopped to examine it. “They legitimately were T passes. They were just unauthorized.’’

On March 11, a conductor on the commuter rail’s Providence/Stoughton Line did a double-take when a customer flashed a discolored monthly pass, its arrow an unusually light shade of orange. The fading, caused by inadvertent laundering, would have happened even if the pass were legitimate, but the customer, perhaps out of nervousness, volunteered that he had purchased it at a discount on Craigslist, Coakley said.

That raised the conductor’s suspicion. He collected the pass and turned it over to the Transit Police, who found no record of its serial number and began investigating. Working with State Police from Coakley’s office, they traced it to equipment at the Beverly branch of Cubic Transportation Systems Inc. and then specifically to an employee: Townes, a 27-year-old Revere resident.

The company has a contract to oversee passes purchased outside stations, primarily over the phone or online. Coakley said Townes used Cubic equipment to print his own passes, which he peddled through Craigslist and other sources, sometimes using the alias Rich Rohan.

In March alone, authorities said, Townes sold at least 400 monthly passes worth $70,000. Investigators believe the scam stretched to 2007 and was worth as much as $5 million, making it the largest MBTA fare-evasion or fare-fraud case ever, Coakley said.

Police arrested Townes in Revere yesterday and held him at Transit Police headquarters in Boston for arraignment today in Salem District Court on charges of larceny over $250 and conspiracy to commit larceny over $250. Investigators do not believe that others at Cubic were involved, but the case remains open.

The Massachusetts Bay Transportation Authority intends to terminate its agreement with the company for breach of contract and notified Cubic by letter yesterday, as well as in a phone call from MBTA General Manager Richard A. Davey to Cubic’s headquarters in California.

“I have spoken with the president of the company to express not only our outrage, but our expectation that the MBTA will be fully compensated for these losses,’’ Davey told reporters, standing beside Coakley and a poster-sized enlargement of one of the fraudulent passes. “We’ve looked at our contract on the civil side. We believe we have a very strong opportunity to recapture those funds.’’

Until now, Cubic has been collecting $2.3 million a year through an incentive-based contract to take orders and sell $125 million worth of T passes annually. It could take a month or more to terminate the contract. Until then, Cubic will field orders, but the T will print them, with MBTA employees monitoring Cubic’s Beverly processing center, Davey said.

Cubic said through spokeswoman Diana Pisciotta that the company had safeguards to deter fraud and that it was working closely with authorities. “We are dismayed to learn of this situation and pledge to cooperate fully,’’ the company said in a statement.

Nearly all the passes that Townes allegedly sold were commuter rail zone passes: monthly cards, CharlieTickets printed on paper, which retail for $59 to $265, depending on the distance between a customer’s home station and Boston’s North or South Station. Zone-pass holders can also take unlimited trips by bus, subway, and other T lines.

Coakley said Townes marketed them at a slight discount, selling a $235 pass for $200.

Because commuter rail conductors do not have electronic readers, customers merely have to flash passes. But a small percentage also used the bogus passes to ride the subway and bus, where the magnetic strips were read as real.

A records check would have indicated that the serial numbers were not tied to accounts for paying customers. But the financially strapped MBTA, which handles thousands of passes and moves millions of riders a month, did not have practices in place to sniff out the small percentage of unauthorized passes in circulation, Davey said.

“In this instance, obviously, we’re going to step up our auditing of these particular machines and make sure that we’re getting every dollar of passes that we sell,’’ he said.

Cubic has worked with the T since 2009, when it purchased a contract that another company, ERG Transit Systems, signed in 2007. A Facebook profile for Townes suggests he has worked for both, serving since 2007 as a “fulfillment technician,’’ and describing his job dryly: “I put stuff in envelopes and mail them.’’

The profile also identifies Townes as a former Roxbury Community College student and a graduate of Boston Latin Academy. A spokesman for the Boston School Department confirmed he was last enrolled at Latin Academy in 2001-02.

The attorney general and the T declined to identify the conductor who spotted the faded pass, because he is a potential witness. The conductor works for the Massachusetts Bay Commuter Railroad Co., the private firm that operates T commuter rail under contract.

The line’s general manager, Hugh J. Kiley, said that he could not even thank the conductor for his diligence because the man was on vacation this week.

“I’m proud of that employee,’’ Kiley said. “He was taking care of the passengers and operating the train, but at the same time he was astutely or acutely aware that this thing looked a little bit suspicious.’’

Passes are stamped by month and cannot be purchased earlier than 15 days before the month begins. Unused passes can be returned for a refund. Used passes are sometimes available on Craigslist. But discounted passes available far in advance are a “red flag,’’ Davey said.

Because the investigation is ongoing, Transit Police Chief Paul MacMillan encouraged customers who believe they may have purchased fraudulent passes to contact Transit Police at 617-222-1160.