Many N.H. veterans face long rides to get care from VA 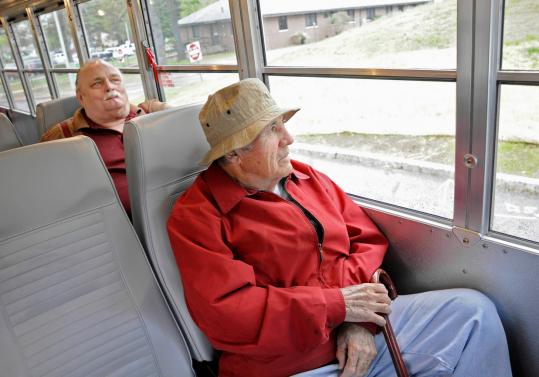 Michael Chioccola (front) and Gerald Gendron waited for the bus to leave Manchester, N.H., for Boston. (Mark Wilson for The Boston Globe)
By Brian MacQuarrie Globe Staff / May 16, 2011

MANCHESTER, N.H. — Thomas Bonenfant, a 68-year-old Army veteran from Rochester, said with a wry smile that he has “been through the grinder.’’ He was not referring to the VA medical procedures he had undergone.

For a biopsy and a battery of X-rays, Bonenfant needed to travel out of state to a veterans hospital in Boston. The cost: $60 for a driver to ferry him to North Station, then a subway trip to Forest Hills, and finally a bus connection to the VA facility in West Roxbury.

The time: a four-hour trip from the only state in the country without a full-service veterans hospital.

Bonenfant is one of many ailing New Hampshire veterans who have become reluctant road warriors. Every month, an average of 312 men and women pick up a shuttle at the Manchester VA Medical Center to ride to the Boston veterans hospitals in West Roxbury and Jamaica Plain for joint replacement, cardiac surgery, pain management, and a gamut of other procedures.

“It is unconscionable that our veterans must board shuttles to Massachusetts or Vermont to get the medical care they have been promised in exchange for their service,’’ said US Senator Jeanne Shaheen, a New Hampshire Democrat who has filed a bill with Senator Kelly Ayotte, her Republican counterpart, to require a full-service Veterans Affairs hospital in New Hampshire or contracts for comparable services.

Bonenfant made his own arrangements to reach Boston, but many veterans take a free daily shuttle from the Manchester VA Medical Center that leaves by 8 a.m. and sometimes does not return until 9 p.m. The days are long, the bus seats can be uncomfortable, and some veterans are in constant pain during a trip that is often snarled by traffic.

“This is something that has been an issue since I was governor,’’ said Shaheen, who served in that position from 1997 to 2003. “For a lot of people, that’s a real hardship.’’

The inconvenience has reached a point, said Ray Boucher, a volunteer transportation coordinator, that some veterans are forgoing medical treatment rather than take a grueling trip to Boston.

“I feel for these guys,’’ said Boucher, 60, who is affiliated with the Disabled American Veterans. “They’re getting to the point where they don’t want to go down there any more.’’

Boucher, whose volunteers bring veterans from their homes to the Manchester VA Medical Center for appointments, also had been delivering riders who connected to the Boston shuttle. No more. Because his drivers were responsible for their riders, Boucher said, they sometimes waited 12 hours or more until the shuttle returned from Boston to Manchester.

As a result, the Disabled American Veterans decided that Boston-bound patients would need to reach Manchester on their own and arrange for a ride home. “It bothers me because I get calls every day from people who want the service,’’ Boucher said.

One morning last week, veterans who waited for the shuttle to Boston, several of them holding canes, praised the care they receive in Manchester and its five outpatient clinics around the state. But they also agreed they would prefer to stay in New Hampshire.

“It would be much better if they had the service up here,’’ said Gerald Gendron, 67, of Manchester, an Army veteran with lip cancer. “But it’s the only game in town, so you have to go where the game is.’’

The Manchester VA medical center, built in 1960, was downsized from a full-service facility in 1999 for financial reasons. The demand for on-site acute care had decreased, said Dr. Marc Levenson, the hospital’s medical director. The VA contracts with Concord (N.H.) Hospital to treat veterans with acute-care problems such as heart failure, pneumonia, or sepsis, but also sends about one-quarter of such patients out of state. Over the last 12 months, 2,741 cases in New Hampshire were referred to Boston veterans hospitals, VA officials said. That figure dipped 15.6 percent from the previous year. New Hampshire’s 136,000 veterans include 55,000 who are at least 65 years old.

Levenson said the VA has tried to minimize the travel burden. In addition to the primary-care clinics, he said that the VA has added pain management, neurology, ophthalmology, and other services at Manchester. “It’s sort of a work in progress,’’ Levenson said.

Shaheen, who called the arrangement with Concord Hospital “a great step forward,’’ added that “more needs to be done.’’

Under the legislation, the Veterans Affairs Administration would be given the flexibility to either expand the medical center or choose the most cost-effective way to provide comparable services. Many veterans advocates believe that an expanded hospital in Manchester is not economically feasible.

For Barry Conway, commandant of the State Veterans Home in Tilton, one option would be to provide veterans a government-issued card that could be presented for care at any hospital in the state. “I think we can produce a better widget, I really do,’’ Conway said.

The need for in-state treatment will remain important as veterans return from Iraq and Afghanistan, said Peter Burdett, chairman of the State Veterans Advisory Committee.

“We’re trying to have the VA hospital have a larger footprint in the state to provide every veteran with the care that they need inside the state,’’ Burdett said. Under the current system, he said, “that’s a lot of veterans put through a lot of discomfort.’’