For Legal’s captain, a long, tumultuous voyage to the sea 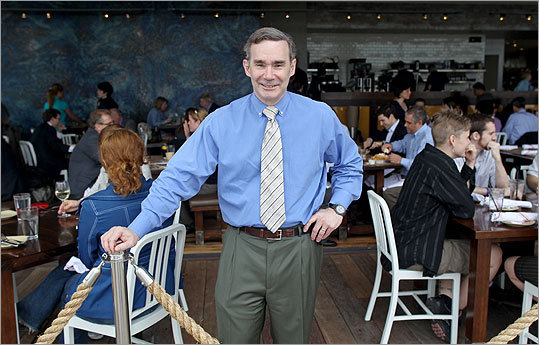 (Jonathan Wiggs/Globe Staff) Roger Berkowitz is the president and CEO at the new Boston-Legal Harborside Restaurant. Legal Harborside is the 20,000 square foot flagship on the Boston waterfront.
By Bella English Globe Staff / May 14, 2011

Roger Berkowitz is beaming like a first-time father as he walks through his newest restaurant, Legal Harborside, on Liberty Wharf in the Seaport District. Some Boston notables eating lunch slap him on the back or shake his hand.

“The birthing of this was a long time coming,’’ says Berkowitz, the 58-year-old president and chief executive of Legal Sea Foods. “If you’re in the seafood business in Boston 60-odd years you definitely want to be on the water.’’

Berkowitz’s latest Legal Sea Foods offspring is getting a lot of attention for its location and scale: 23,000 square feet with 700 seats, making it one of the largest restaurants in Boston. It’s on the site of the old Jimmy’s Harborside, next to historic Fish Pier, just across the water from Logan Airport.

Though he will not reveal how much he spent on what he now considers his flagship, Berkowitz says it’s Boston’s most expensive restaurant rehab. Nearly six years in the planning, Harborside is what Berkowitz says he dreamed of doing once he had the time and money.

“I just wanted to get on the damn water,’’ he says. “Then, I said, ‘If we’re coming on the water, why not do more than one concept? Let’s do something really special with it.’ ’’

Since he took over the family business in 1992, Berkowitz has grown it at a steady clip and turned it into the biggest Boston-bred restaurant empire. He’s got 32 Legal Sea Foods stores — as he calls the restaurants — from Boston to Florida. He serves on the boards of businesses and nonprofit groups and donates generously to causes. He prefers to keep a low profile but has gotten himself into a couple of high-profile jams.

Friends describe him as a workaholic who takes time out to meditate, a health nut who drinks three cups of coffee most days. He values his reputation but will not back down from a controversy.

Those who know him best are betting that Harborside will not be his last project.

“His mind is always on,’’ says Lynne Berkowitz, who met her husband in 1974 when she was a waitress and he a fry cook at the old Inman Square restaurant owned by his parents.

Berkowitz, who began peeling shrimp as a kid in Inman Square, says he’s got ideas for his existing restaurants as well as some new projects, though he will not give specifics.

‘More accessible’ venue Harborside is already crowded, even with only the first floor open; the upper two levels are expected to open within a month. The ground floor gives a nod to the company’s humble roots. Yes, you can plunk down a lot for a lobster, but you can also get pizzas — including white clam and smoked salmon — and “plates to share.’’ The finer dining will be upstairs.

“This in terms of feel is more democratic, more accessible to more different kinds of people,’’ he says.

Berkowitz had the hallway leading to the restrooms papered with a black-and-white mural of his father, George, working behind the fish counter in Inman Square decades ago. At 86, he still holds the title of chairman.

“He’s the founder and elder statesman,’’ Berkowitz says. Asked about his mother’s involvement, he chuckles. “My mother, who didn’t cook, still has the audacity to criticize menu items.’’

Harriet Berkowitz also criticized her son’s recent radio advertising campaign that included the line, “If your mother couldn’t find the time to check your seafood for purity, then why should you feel bad when you check her into the nursing home?’’ Her son says it was tongue in cheek, but his mother — who is not in a nursing home — and her friends didn’t find the humor in it.

Roger Berkowitz ran a more controversial campaign in 2008 on Boston trains with signs that said, “This conductor has a face that looks like a halibut.’’ The Boston Carmen’s Union took offense, threatened a boycott, and asked for an apology. Berkowitz’s apology: “We should have never, ever said, ‘This conductor has a face like a halibut,’ when the truth is, most conductors don’t look anything at all like halibuts. Some look more like groupers or flounders. I’ve even seen a few who closely resemble catfish. And there’s one conductor on the Green Line that looks remarkably like a hammerhead shark.’’

Stance on sustainability Vito Giacalone, a Gloucester fisherman who met Berkowitz in 2002 when both served on the board of the Northeast Seafood Coalition, an advocacy group for the seafood industry, said that was typical of him.

“Roger has never been afraid to get up on a soapbox and say what he thinks,’’ Giacalone says. “His recent stand on sustainability is a clear example.’’

In January, Berkowitz made headlines by holding a dinner at the Park Plaza Legal of “blacklisted’’ fish, or those identified as overfished. After the four-course dinner, Berkowitz expounded on the sustainability movement, which he believes uses “flawed science.’’ He does say there’s a real threat to fisheries if not monitored. “But the legislation in place today more than protects the fisheries,’’ he says.

Much of the sustainability effort is initiated by Seafood Watch, run out of the Monterey Bay Aquarium in California. A spokesman for the aquarium says he wished Berkowitz had used less inflammatory language. “I think we would have been happier if there was more light and less heat,’’ said Ken Peterson.

By far the most personal and painful public controversy involving Berkowitz occurred nearly 20 years ago, when Roger, the eldest of three sons, was tapped by his parents to run the company. The middle brother, Marc, filed a lawsuit that led to a long legal battle, a settlement, and estrangement from his brother and parents. He also opened his own short-lived restaurant, Marco Solo, right near a Legal Sea Foods. (The youngest brother, Richard, was not interested in running the family business.)

Berkowitz would rather not talk about the family feud.

“It’s history,’’ he says. “I think we have as close to a respectful relationship as one could hope for. The relationship is better. . . . It’s little by little on the mend.’’

Both of his brothers came to the opening of Legal Harborside. Though the settlement with Marc remains private, Roger says neither of his brothers has ownership of any of the restaurants. Marc Berkowitz did not return calls from the Globe.

Growing a business, family Legal Sea Foods now has about 4,000 employees and does more than $200 million in annual revenue. In 1999, Roger Berkowitz set up a “President’s Advisory Council.’’ He meets quarterly with this group of hourly workers such as bartenders and waiters, who bring him news from the front lines. From a couple of waiters, he got the idea for a decent children’s menu, which became a national award winner.

Then there’s the baked stuffed shrimp, which wasn’t going over well with customers. “We’d spent thousands of dollars and brought in tons of culinary consultants,’’ Berkowitz recalls. Then a waiter piped up and said, “Why don’t you do it with a variation of the crab cakes?’’ They added crab cake to the stuffing, and it was an immediate hit, he says.

For nine years, Legal has been voted Boston’s most popular restaurant by Zagat, and is even listed in the book “1,000 Places to See Before You Die.’’ (In the alphabetical index, it comes beneath Leeds Castlein England and above Lenin Mausoleum in Moscow.)

Asked why her husband has been so successful, Lynne Berkowitz has a one-word reply: “Discipline.’’ His parents set strict standards for their family and their business.

His own children have grown up with fish oil in their veins, all three of them starting as kids behind the fish counter at the Chestnut Hill restaurant and later as bartenders, waiters, and hosts. Matt, 31, now works in the quality control center, overseeing the fish laboratory (which tests the fish for purity), and sanitation, purchasing, and fileting of products. Scott, 29, is an assistant general manager who goes from restaurant to restaurant. (Daughter Jackie, 26, is a social worker in Vermont.)

“When the kids were little, Roger would leave by 8 in the morning and not come back till 1 the next morning,’’ Lynne says. As the business grew, things actually became easier. “He was forced to get help,’’ she notes. “He still works all the time, but it’s not as intense.’’

One thing Berkowitz saves time for is daily transcendental meditation. “If I have issues I’m wrestling with, I come to solutions very quickly,’’ he says. “It doesn’t make me any smarter, but it makes me think quicker.’’

His life, he says, is about fish and family. He and Lynne became grandparents nearly a year ago, with the birth of Scott’s son, Jack. “Do you want to see a picture?’’ asks Berkowitz, not bothering to wait for a reply as he calls it up on his iPhone, sitting at a table in his brand-new Harborside and beaming like a first-time grandfather.

Photos: From Jimmy's to Legal at Liberty Wharf