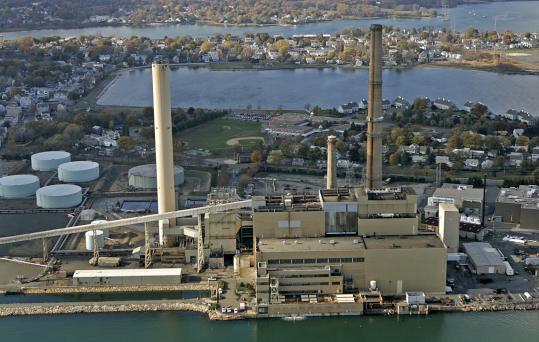 Some feared the loss of business, but others welcomed the move toward cleaner energy. (David L. Ryan/Globe Staff File 2007)
By Sean Teehan Globe Correspondent / May 12, 2011

The owners of the coal- and oil-fired Salem Harbor Power Station announced yesterday they will shutter the plant within three years because environmental regulations and facility upgrades make the plant too costly to operate.

The announcement by Inc. comes one day after the private overseer of the region’s power network declared that there would be enough energy available even during peak periods if Dominion closed two of the four boilers at the massive 747-megawatt plant. Dominion now says it will close all four boilers by June 2014.

Some Salem residents and officials bemoaned the loss of a business that pays more than $4 million in taxes each year and provides about 150 jobs. But environmentalists said it was a signal New England is moving toward cleaner energy.

The Salem plant, which opened in 1951, has long been targeted as one of the state’s dirtiest coal and oil power plants for the pollution it emits, including heat-trapping carbon dioxide released into the atmosphere.

“This is the first time in our lifetime that it is no longer economical to burn coal for energy,’’ said Shanna Cleveland, staff lawyer for the Conservation Law Foundation. “They can’t compete with natural gas and other cleaner sources of energy.’’

There are two other coal-fired power plants in the state: Brayton Point in Somerset and Mount Tom in Holyoke.

Salem Harbor’s closing will have a lasting impact on city finances, Mayor Kimberley Driscoll said in a statement. But she said a $200,000 grant Salem recently received from the state will help study how the property can be reused.

“The power plant is, far and away, the largest taxpayer in the city, and its ceasing operations will have real impacts to the city’s finances,’’ Driscoll said.

The plant will phase out about 30 jobs at the end of the year when the first two coal-burning units are shut down and eliminate the remainder when the rest of the plant closes in three years, Genest said.

Richard Robey, assistant business manager of Salem’s branch of the International Brotherhood of Electrical Workers union, said the utility’s decision was not a shock.

Although he said the move was the best business decision for Dominion, which would have to pay millions updating the plant to comply with environmental regulations, he questioned whether ISO-New England, the regional power grid manager, would be able to assure that the region consistently has enough power.

ISO has told Dominion that shutting down the two smaller units would not threaten the system, but losing the two larger units — one powered by coal, the other by oil — would endanger the reliability of the northeastern Massachusetts and Greater Boston power grids.

ISO does not have authority to prevent Dominion from shutting the plant.

ISO New England is examining ways to ensure that the grid is reliable, a spokeswoman said yesterday, adding that one solution could be upgrading transmission lines.

In Salem, residents applauded the step toward clean energy use, but worried about the affect the closing may have on the city and employees.

“Hopefully, they take care of the people’’ who work there, said Mike Chase of Salem, 46, as he walked downtown with an iced coffee. “I don’t know what they’re going to do when it closes.’’