In the war on infections, add sugar 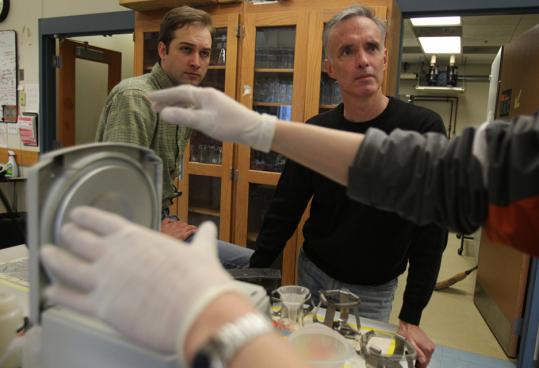 James Collins was a junior at the College of the Holy Cross, running 80 to 90 miles a week as he worked to shave seconds off his 4:17 mile, when he was sidelined with strep throat. He went to the infirmary, took a two-week course of antibiotics, and felt better.

Then it happened again — 13 times over the next two years, ending his college track career.

Some 25 years later, Collins is a Boston University bioengineer whose research on the warfare between bacteria and antibiotics has persuaded him that his illnesses in college were more than bad luck. Instead, he blames “persisters,’’ bacteria that evade medications by slipping into a zombielike state, then mysteriously reawaken to cause new infections.

In a study to be published today, Collins, 45, reports that he and colleagues have discovered how to make these bacteria, which are thought to underlie many stubborn infections, susceptible to drugs.

“Could we wake these guys up?’’ Collins asked. “Could we . . . get them up off the ground so we can punch them and knock them out?’’

The answer appears to be yes. In tests in a lab dish and in mice, the sugar revved bacteria up just enough so that a particular type of antibiotic could make its way into the cells and destroy them.

The research, published in the journal Nature, is preliminary, and scientists not involved in the work cautioned that further study is needed before this approach could be used in human patients.

Infections that resist treatment or recur have become a major public health problem. Most people are familiar with resistance, when bacteria mutate into strains that are invulnerable to a particular drug. But in any population of bacteria, there are also persisters, which are believed to play a role in such problems as tuberculosis and hard-to-treat biofilm infections that form on implanted medical devices.

“Persisters are very difficult to eradicate; they evolved to survive,’’ said Kim Lewis, director of the Antimicrobial Discovery Center at Northeastern University. “Looking for ways to try to beat them is very important.’’

Collins is a MacArthur “genius’’ grant recipient who is best known for building a vibrating shoe insole that could help elderly people, who often have trouble with balance, stay steady. But nine years ago his laboratory began studying the precise interactions between bacteria and antibiotics, in search of new ammunition for the escalating war against infections.

“We’re currently in an era where we’re having to rethink our antibiotics,’’ said Dr. Deborah Hung, a core faculty member who studies infectious diseases at the Broad Institute, a Cambridge genetics research center. “In the last five years or so, there’s been this important renaissance that’s been quite spearheaded by Jim Collins, to revisit this question: Do we really know how antibiotics work?’’

Lewis’s laboratory recently found that persisters play a key role in the infections that afflict cystic fibrosis patients. In work published last year in PLoS Biology, he also found that administering a particular type of antibiotic can trigger a chain of events with the unintended effect of creating persisters, sending bacteria into a dormant state that allows them to survive a broad spectrum of drugs.

Ultimately, the goal of such research is to identify weak spots that might be targets for new kinds of drugs or combination therapies that boost the power of existing antibiotics.

Because persisters survive antibiotic treatment by shutting down, it seemed natural to try waking them up in order to finish them off. So Collins and a graduate student, Kyle Allison, concocted various cocktails of sugars and different classes of antibiotics to see whether they could jolt the persisters’ metabolism awake and hit them with the drug.

To their surprise, they found that they were not waking up the bacteria completely, but turning them on just enough to make them vulnerable to one class of antibiotics, called aminoglycosides.

It was a bit like flooring the gas pedal in a car and then seeing only one tire turn, said Floyd Romesberg, an associate professor of chemistry at the Scripps Research Institute, who was not involved in the research.

When Collins and Allison injected mice infected with E. coli, with an antibiotic called gentamicin and a sugar called mannitol, they were able to knock down persister bacteria and inhibit the spread of infection.

“This is a neat study,’’ Romesberg said. “There’s been a real dearth of new antibiotic development in the past 40 years, and now basic science is coming in and reenergizing the field and coming up with smarter ways of going after killing bacteria.’’

Collins’s laboratory is now testing whether a similar sugar and antibiotic cocktail might work against the bacteria that cause tuberculosis.

And it is not purely a matter of scientific interest. Two years ago, in the midst of this research, Collins’s mother was hospitalized with a staph infection. She was put on intravenous antibiotics and got better — only to see the same infection return again and again.

“It was frustrating for me to see this occur,’’ Collins said. “But satisfying to think that we may now have a treatment that . . . is very simple, very inexpensive, and is something that could be implemented quite readily.’’

Carolyn Y. Johnson can be reached at cjohnson@globe.com