Angered by repeated rate hikes, Mayor Thomas M. Menino will file an emergency petition today with the federal government seeking authority to regulate the cost of basic cable in Boston for the first time in a decade.

The filing with the Federal Communications Commission follows three consecutive price increases by , which has hiked the cost for its lowest rung of service by more than 60 percent over the past three years, according to Menino’s office.

That has resulted in “substantially higher’’ cable prices in Boston than in nearby communities where rates are controlled by local governments because of a lack of competition, according to a study commissioned by the city.

In Boston, another company provides cable service to a handful of residents and the presence of that competitor has long been seen by the FCC as making government regulation unnecessary.

But the Boston study found that, despite the promise of greater competition, the cable giant’s market dominance allowed it to charge higher rates and “over collect’’ $24 million since 2008 for basic cable. Many low-income families rely on the basic package of roughly 20 channels for rudimentary news and community access programming.

“Comcast is taking advantage of deregulation so we are going to file a petition with the FCC asking that basic rate regulation return to Boston,’’ Menino said in an interview. “These aren’t reasonable rates and that’s what I want.’’

Comcast declined to comment because the company had not seen the petition filed with the FCC, a spokeswoman said. In the absence of competition, the FCC authorizes local governments to regulate cable rates under the guidance of extensive federal guidelines, city officials said.

When Comcast announced its most recent rate hike in February, it said the average bill would rise by 3.2 percent. That includes customers who pay for hundreds of channels, high-definition programming, and on-demand movies. But the proportional impact was far greater on Boston’s 15,000 to 20,000 basic subscribers who saw their monthly bills jump 19 percent, or $2.50.

After the most recent rate hike, city officials hired Front Range Consulting Inc., to analyze Comcast’s local rates. The company found that Comcast charged much more in Boston, Brookline, and Everett, which are all communities without FCC regulation.

Comcast charges much less in Cambridge, Chelsea, and Malden, where prices are still controlled by the government, the study said.

“If you look at other communities around, we’re taking the brunt of the increases,’’ Menino said.

In 2002, the FCC deregulated cable rates in Boston. The argument then was that new competition for Comcast would keep prices low. had begun offering cable service in the city and had plans for an expansive network with more than 250,000 subscribers, according to the city’s petition with the FCC.

Over the past decade, however, RCN has failed to grow significantly in Boston.

Several years ago, the Menino administration filed a similar petition, which was rejected by the FCC.

This time, however, circumstances have changed, the city says.

RCN was originally owned in part by a telephone company. That was a key consideration for deregulation, which was allowed under the Telecommunications Act of 1996. But last August, the private equity firm ABRY Partners LLC bought RCN.

City officials now see a new opening with the FCC.

“With the sale of [RCN], we feel there’s an even greater argument that Boston is no longer a competitive market,’’ Menino said.

Comcast has made some concessions. Earlier this year the cable provider announced a deal with the city to offer discounted Internet service for low-income households. Residents who graduate from federally funded computer-training programs can receive broadband service for $10.95 a month for the first year and $15.95 a month for the second year.

The cable company also offers senior citizens a special $5 monthly rate for basic service. But city officials argue that the concessions are not enough.

“The majority of subscribers in the City [are] unprotected from Comcast’s market power,’’ the city wrote the emergency petition to the FCC. “An immediate restoration of regulatory authority is therefore necessary to protect subscribers.’’

Andrew Ryan can be reached at acryan@globe.com 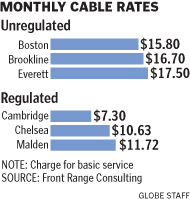