Report of threat to railroads leads to enhanced security 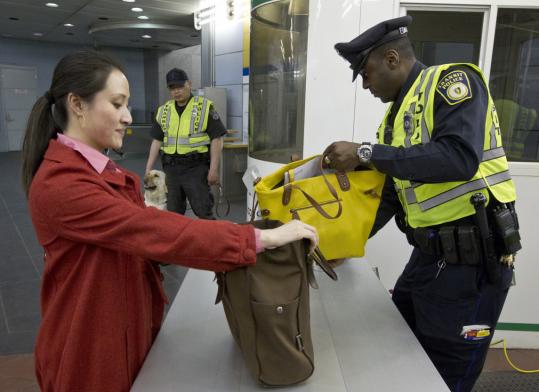 The discovery of materials at Osama bin Laden’s compound that included notes proposing a bridge attack to derail a passenger train prompted Massachusetts and national transportation agencies yesterday to continue their enhanced scrutiny, with more visible patrols and bag checks since bin Laden’s killing this week.

The report of a handwritten notebook seized at the Pakistan compound suggested the Al Qaeda leader was contemplating an attack on a railroad bridge. The Department of Homeland Security, Amtrak, and the MBTA stressed that they do not believe such an attack is imminent but encouraged travelers to remain vigilant for suspicious activity.

Homeland Security, in a statement, said initial reports of terrorist plots are “often misleading or inaccurate and subject to change,’’ but that federal, state, and local partners “remain at a heightened state of vigilance.’’

The MBTA this week increased high-visibility officer and canine patrols while conducting more passenger screenings and inspections. MBTA and state Department of Transportation officials declined to be interviewed, but issued a statement through Transit Police Chief Paul MacMillan.

“While the recent reports are not specific to the MBTA, we want to ensure our customers and employees that we are taking all appropriate steps to ensure their security,’’ MacMillan said.

Amtrak spokesman Clifford Cole said the service has been working closely with Joint Terrorism Task Forces — regional bands of specially trained investigators, linguists, analysts, and law officers, under the US Department of Justice — to monitor threats to intercity rail.

“Amtrak employees remain at a heightened state of vigilance, and we will employ appropriate countermeasures as and when necessary,’’ Cole said via e-mail.

The American Public Transportation Association, which represents transit systems and departments of transportation, called on the federal government yesterday to increase funding for transit security. Last month, Congress reduced the annual funding for such security from $300 million to $250 million in its budget deal. Neither amount is adequate or approaches the more than $1 billion recommended by the 9/11 Commission, said William Millar, president of the transportation association.

“The intelligence discovery reinforces what we have known for many years: Transportation is the terrorists’ favorite target,’’ Millar said in a statement. “As I have said many times, ‘We don’t need another wake-up call.’ ’’

Money invested so far on surveillance cameras, screening, and other measures signals to terrorists that the agencies are taking the threat seriously and attempting to harden railway systems against attack, said Wilson, who has conducted operations and efficiency research for the T and other transit agencies.

It would be impossible and impractical to fully cover and monitor the country’s vast urban and intercity rail networks or to delay the millions of daily transit travelers for airport-style screening, he said. To that end, intelligence is more important.

“I’m not convinced that spending a lot of additional money on this is going to be particularly effective,’’ Wilson said. “I am skeptical of a lot of added benefit from new measures.’’