THIS STORY HAS BEEN FORMATTED FOR EASY PRINTING
REVERE

Police say statue may be sold for scrap value 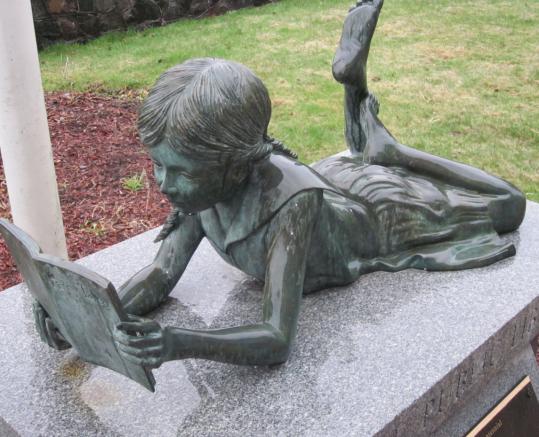 The Revere Public Library’s 60-pound bronze statue, dedicated eight years ago, was stolen on Easter Sunday. Police believe the thieves’ intent was to sell it for its value as scrap metal.
By Steven A. Rosenberg Globe Staff / May 5, 2011

For almost a decade, the barefoot and pigtailed girl could be seen holding a book in front of the Revere Public Library. But sometime on Easter Sunday, police believe thieves pried the 60-pound bronze statue from its marble base with the thought of selling it to a scrap metal shop.

“I’m disappointed,’’ said Revere Mayor Tom Ambrosino, who noted that the theft of the statue was the latest robbery targeting public property that could be scrapped for cash. In the last two years, Ambrosino said, people have stolen guard rails, fire hydrant caps, and manhole covers. Even a tidal gate that was installed to prevent flooding at Revere Beach was stolen. “It’s a sign of the times. People are stealing anything that has metal or copper in it.’’

Currently, the state does not regulate the second-hand purchase of metals and leaves it up to municipalities to establish ordinances. Ambrosino wants tougher state laws, and there are at least two bills proposed by state legislators to create a law that would establish uniform regulations.

One of the bills, supported by Attorney General Martha Coakley, would require metal dealers to keep more comprehensive records that would include the name, address, photocopy of the ID, and/or a photograph of sellers for at least two years. The bill also prohibits dealers from buying street signs, manhole covers, and railroad tracks.

“This brazen theft is another example of why we believe new legislation is needed,’’ Coakley said. “Law enforcement officials continue to face significant obstacles in identifying criminals who steal metal from abandoned properties or other structures. Our legislation would create strict penalties and guidelines, requiring increased availability to records and the identities of scrap metal dealers, sellers and their wares.’’

Eight years ago, the statue was dedicated by the library’s Board of Trustees in honor of the building’s centennial. Dan Maguire, a former library trustee and current member of the School Committee, said the statue cost about $3,000 in 2003. Frank Schettino, chairman of the library trustees, said his board may offer a reward if the statue is not returned.

The theft was the latest incident to rock the small, modest library just blocks away from City Hall. Last month, former library director Robert Rice was accused of embezzling at least $200,000 from the city. Prosecutors say Rice used city funds directed for library purchases to buy items such as coins, decorative glass pumpkins, and computer software.

At the library, glum workers wondered if the statue — known in the building as “the girl’’ or “Jill’’ — would ever return to its perch. For the last few years, the three-and-one-half-foot statue — forever engrossed in a “Fairy Tales’’ book — has served as the library’s symbol, emblazoned on its website, stationery, and library cards.

“She’s been a role model,’’ said Mark Ferrante, acting library director. “We’re hoping that she turns up somewhere and is returned. We would love that to happen.’’

At the reception desk, librarian Janet Addonizio said the statue’s theft was the talk of the library. “She was our mascot; she was our girl,’’ said Addonizio. “We kind of nicknamed her Jill. She looked like a simple all-American girl and the name seemed to fit her.’’

In the adult reading room, several students from Rumney Marsh Academy, wondered why anyone would want to steal a statue of a girl reading a book. Courtney Guadagno, 13, said she was inspired by the statue. “I like the way she sat and the way she was focused on the book. It reflects a lot about the way we care about the books here,’’ she said.

Others, like Samantha Eligene, 12, said the statue “symbolizes knowledge.’’

In the children’s reading room, second-grader Marcella Pereira, set aside her book, “Diary of a Wimpy Kid,’’ to discuss the theft. “It’s not theirs; it’s the library’s,’’ she said. “They should put her back where they found her.’’