Parents push T board to refrain from changing stroller policy 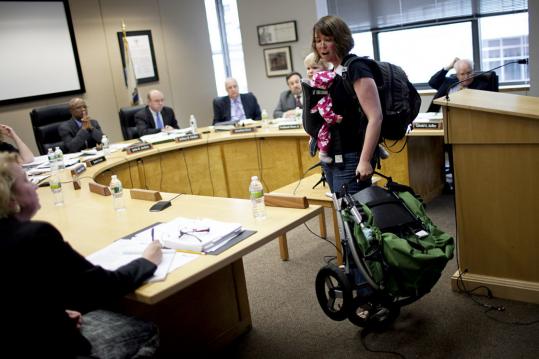 Amber Baker showed the MBTA board of directors how she would fold her stroller while holding her daughters, Rose, 19 months, and Ella, 2 months. (Yoon S. Byun/Globe Staff)
By Eric Moskowitz Globe Staff / May 5, 2011

With her 2-month-old in a baby carrier and her 19-month-old cradled between her legs, Amber Baker demonstrated for the MBTA board of directors yesterday the difficulty of trying to fold a gear-laden stroller and keep her children close while boarding a crowded subway.

“OK, I’ve got it folded — I’m extraordinarily proud — meanwhile, the doors are closing,’’ said Baker, a Somerville lawyer who is on maternity leave, after 15 seconds of stroller-folding and children-guarding exertion. “How do I hold onto a bar, how do I not hit another passenger, how do I keep my children safe?’’

Baker was one of half-a-dozen parents who attended the meeting with children in tow to speak out against a purported no-stroller policy on the T — and who represented the thousands of emotionally charged comments that have been lodged on Facebook walls, e-mailed across Boston-area parenting listservs, posted to blogs, and lobbed at the MBTA’s online and telephone customer service lines this week.

Surprised officials said at the meeting and afterward that the T was not considering such a policy and was instead thinking about asking parents on some crowded bus lines to fold their strollers, if possible, to make more room.

But the immediate and widespread response reflected the speed with which kernels of information — an open-ended survey question on MBTA.com; an imprecise news report; and a flurry of vague or inadvertently misleading posts that appeared on TV, radio, and websites — can spread in an age of instant media and social networking.

Other factors also swirled in the mix, including more families with young children — and the means to buy amply proportioned strollers — staying in the city and riding public transit. That has caused tension on a crowded and fraying public transportation system.

In 20 “Join the GM’’ sessions over the past year, MBTA General Manager Richard A. Davey repeatedly fielded complaints from riders about strollers — able-bodied riders concerned that strollers were taking up too much space, and riders with disabilities who found them occupying areas designated for the disabled. Davey was hesitant to discourage them, but before leaving for vacation in Asia last week, he asked staff to research what other transit agencies do, and to post a survey question on MBTA.com, spokesman Joe Pesaturo said.

The question — “As part of the MBTA’s ongoing efforts to provide a comfortable and easily accessible transit environment, should the MBTA request that baby strollers be folded before customers board a bus?’’ — went up Monday and will stay up through May 16. By yesterday afternoon, it had attracted a record number of responses for a T survey (8,965 votes), with 66 percent voting no.

MBTA research showed that some agencies, including Philadelphia’s SEPTA and Atlanta’s MARTA, ban open strollers on all modes of travel, and some, such as Washington’s Metro, request stroller-stowing but do not require it. Parents urged the T to reject any such policy.

“I believe the proposed policy is unsafe — for children, for parents, for T employees, and for other passengers,’’ said Alison Mitchell, a lawyer, former State House aide, and mother of two young children, describing the potential hazards and complications. “Strollers are a safe, convenient method of traveling with young children and their assorted gear.’’

The two women on the five-member board seemed surprised by the stroller talk but quickly weighed in with the parents.

“As a mother who wants to be a grandmother,’’ Elizabeth Levin said, “I wholeheartedly agree.’’