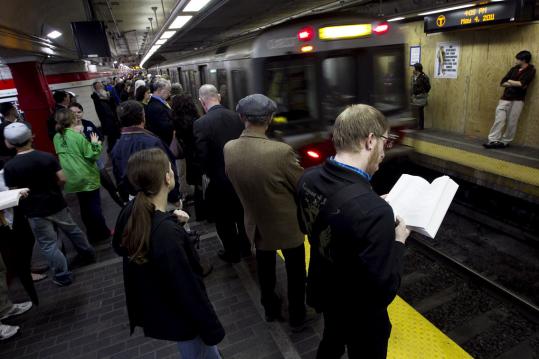 Travel on the MBTA grew in March by the largest percentage in more than two years, probably propelled by recovering employment and soaring gas prices in the Boston area.

The T — including the subway system, buses, and commuter rail — recorded an average of nearly 1.3 million passenger trips each weekday in March, a 5 percent increase from the year before. The sharpest growth was registered on subway and trolley lines, where ridership swelled 7.1 percent, according to statistics released by the transit agency this week.

The increase in MBTA ridership occurred even as travel on highways also rose, albeit at a much slower rate than ridership on the T. Toll booth collections and automated traffic counters on major highways in the Boston area showed an average increase of 2 percent or less in March when compared with a year before.

Traffic was considerably higher on the Tobin Bridge and in the airport tunnels — a reflection of increased activity at Logan Airport, where the expansion of low-cost carriers and a thawing economy translated into more flights and passengers.

With the price of gasoline approaching or even exceeding $4 a gallon across the Boston area, transportation observers expect more people to ride the T, even as highway traffic numbers may level off or even decrease.

“The uptick across the board in traffic — whether it be public transportation or vehicular traffic — is a good sign for the economy,’’ state Secretary of Transportation Jeffrey B. Mullan said. “People moving around is always a good thing.’’

Mullan cited the recovering economy as the most important factor behind the increases, which could explain why both mass transit trips and vehicular travel rose. Gas prices, he said, play a secondary role and could shed light on why T use is rising faster than highway travel.

Each commuter who takes public transportation instead of driving means one fewer car on the road, Mullan said, and with it less congestion, lower emissions, and reduced fuel consumption, as well as more revenue for the financially strapped T.

David Luberoff, executive director of Harvard’s Rappaport Institute for Greater Boston, said many variables affect traffic and transit ridership. For example, March 2010 was one of the rainiest on record, which might have kept some travelers inside.

But this year’s increase, he said, is “probably first linked to the shift in the economy.’’

The preliminary March unemployment rate for the Boston area was 7.1 percent, a full percentage point lower than the revised rate for March 2010, according to the federal Bureau of Labor Statistics. The region gained more than 30,000 jobs during that period — and along with them, more people trying to get around every day — while gas prices ballooned from roughly $2.75 in March 2010 to $3.50 a gallon a year later.

Since then, the price has continued to climb, with AAA recording an average price of $4 for a gallon of self-serve regular in the Boston area yesterday, approaching the all-time high of $4.09 set on July 9, 2008.

“In that timeframe, we also experienced a significant increase in T ridership, so it’s certainly not surprising to see that happening again,’’ said Mary Maguire, spokeswoman for AAA of Southern New England. “It’s terrific that people are looking for alternatives as a way to combat high gasoline prices.’’

Maguire said the $4-a-gallon price, not reflected in the March transit and highway numbers, is a tipping point that causes many people to think about the cost of driving before getting behind the wheel.

Paul Regan, executive director of the MBTA Advisory Board, said employment and gas-price fluctuations, as well as seasonal trends, cause T ridership to ebb and flow. Since January 2007, the T has recorded average weekday ridership as high as 1.34 million in September 2008 and as low as 1.11 million this past December, a traditionally lighter month.

Ridership last grew at least 5 percent over the previous year in October 2008.

“The T tends to lose and recapture the same riders. It’s tougher to make inroads in the base until there’s a real jump in gas prices,’’ said Regan, whose board represents the cities and towns served by the T. “But we might even get there [to new riders]. I saw $4.05 today.’’

Bus travel increased 1.9 percent daily to 380,400 riders, and the commuter rail grew 2.4 percent to an average of 134,400 riders a day. The commuter rail may have won back some riders who fled in January and February, when about one of every four trains was delayed, Mullan said. In March, 89 percent of commuter rail trips arrived within five minutes of the posted schedule. “They’re going in the right direction,’’ Mullan said.

Highway traffic counts varied. On the Massachusetts Turnpike, the number of transactions in March at the Newton and Allston tolls rose 1.8 percent over the previous year.

The number of vehicles recorded by a pair of traffic counters on Route 128 (Interstate 95) in Lexington and Wakefield remained essentially stagnant. Stations on I-95 in Danvers and West Newbury also showed minimal change from March 2010 to 2011, while I-495 stations had increases of 3 percent in Raynham and 1 percent in Bellingham. The Department of Transportation did not have figures available for Interstate 93.

Toll transactions for the airport tunnels rose 4.9 percent in March, and Logan had a 7.2 percent increase in flights and 8.3 percent growth in passengers in March 2011 compared with March 2010, Luberoff said.

“People go to Logan either because they’re flying for business or they’re doing well enough that they have some leisure travel, both of which are signs that the economy is doing better,’’ he said.

Toll activity on the Tobin Bridge — up 7.7 percent over the same month last year — was partly attributed to airport traffic but more difficult to explain, officials said.