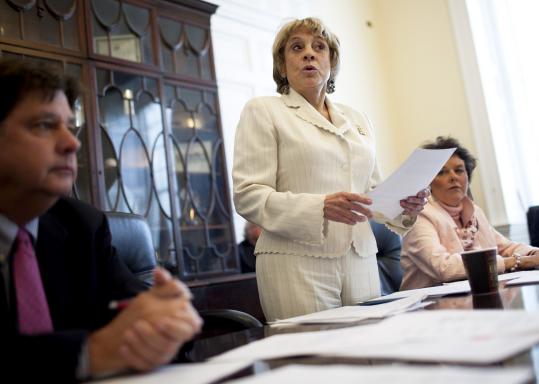 The Governor’s Council confirmed Lenk on a 5-to-3 vote. She is Governor Deval Patrick’s fourth appointment to the seven-member SJC, which issued the landmark 2003 ruling that made Massachusetts the first state to legalize same-sex marriage.

Lenk — who married her partner, Debra Krupp, after the ruling — has 18 years’ experience on the bench, a degree from Harvard Law School, and a doctorate in political philosophy from Yale. Patrick nominated her to replace Justice Judith A. Cowin, who recently retired.

Lenk’s confirmation hearing last week lasted more than seven hours and was often contentious. Critics raised questions about her ruling in an incest case and about whether she had avoid ed conflicts of interest when Krupp represented clients at the Appeals Court as a lawyer for the state public defenders’ office.

Social conservatives blasted Lenk, saying her appointment to the SJC would encourage the indoctrination of children into homosexuality.

But Lenk had the full backing of the state’s legal establishment. Bar association leaders, former judges, and Lenk’s former clerks wrote letters to the Governor’s Council, saying Lenk’s critics had inappropriately focused on her sexual orientation and ignored her legal credentials. They praised her as a woman of fairness, decency, and uncommon intellect.

Patrick had sought to cool the emotional debate, saying the fact that Lenk would be the first openly gay SJC justice was a “nice coincidence,’’ but secondary to her qualifications for the bench.

“I thank the members of the council who concluded, as I did, that Justice Lenk’s sharp intellect, vast experience, and deep sense of humanity will make her an outstanding associate justice of the Supreme Judicial Court,’’ Patrick said in a statement after the vote. “The people of the Commonwealth will be well served by having her extraordinary talents and wisdom on our highest court.’’

Gay rights activists applauded Lenk’s confirmation, but said she had been unfairly attacked during the confirmation process.

“Today is a historic day in Massachusetts,’’ said Kara S. Suffredini, executive director of MassEquality. “We’re thrilled that the Governor’s Council stuck to the facts and focused on the fact that she is an eminently qualified judge and dismissed the antigay rhetoric that characterized the hearing last week.’’

The Massachusetts Bar Association said the SJC would benefit from Lenk’s intellect and from her perspective as a gay woman.

“Justice Lenk’s personal experiences and nontraditional family background will bring much-needed empathy to the court as it grapples with the growing, complex, and diverse societal issues facing the bench,’’ the association’s president, Denise Squillante, said in a statement. “Litigants and the public will have a jurist that profoundly understands their struggles.’’

Cipollini, a Fall River Republican, said he was concerned Lenk would encourage the state to “usurp the rights of parents,’’ that she would allow children to take sex-education courses without parental consent and that she may not respect the right to bear arms.

“We cannot place another liberal-minded judge on the SJC,’’ he said.

Caissie, an Oxford Republican, said she opposed Lenk, although not for the “irrelevant and ignorant’’ reasons cited by others. She said she was concerned that Lenk may not support the Second Amendment and that Lenk wrote in her judicial application that she wants to “develop the law.’’ The phrase, Caissie said, suggests that Lenk does not adequately respect the role of the Legislature.

Manning, a Salem Democrat, did not speak about her vote, but handed out a three-page letter outlining her concerns. She cited, among other issues, a 2000 Appeals Court ruling that found that the state’s incest law applied only to cases of sexual intercourse, not other kinds of sexual contact. Lenk was in the majority in the decision, which led the Legislature to broaden the definition of sexual contact under the law.

But Manning said Lenk had ignored the common understanding of incest and had been evasive at her confirmation hearing.

“I am left to conclude that she is a Trojan horse who will reveal her legal mind inside the walls of the Supreme Judicial Court, far from the public’s grasp,’’ she wrote.