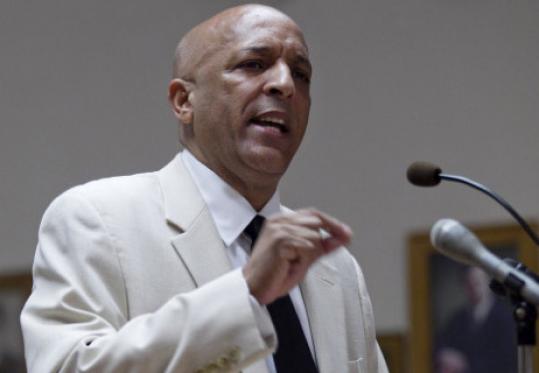 LAWRENCE — In a defiant speech about the state of the city, Mayor William Lantigua disputed assertions that he is corrupt and insisted yesterday that his year-old administration is presiding over sweeping changes to straighten out the finances of this cash-strapped mill city and improve services.

“Tonight, I am proud to say that I have always acted with honesty and with the utmost respect for the awesome responsibilities that I have sworn to uphold,’’ he told city councilors.

The mayor said his address, which the city charter requires to be delivered at the first City Council meeting in February, was months late because “there was not [an] outcry for this.’’

He said it was the first time a mayor had delivered a State of the City speech since 2001. “It was my choice to wait until now to do it,’’ he said in an interview afterward.

Lantigua is facing state and federal investigations into possible corruption and other potential wrongdoing at City Hall, law enforcement officials have said.

The mayor acknowledged that some of his decisions have been unpopular and defended his work. He did not address an effort to remove him from office through a recall campaign.

“We inherited a financial mess. We were asked to make drastic changes. We were forced to make some tough decisions. At times, our actions have not been popular. But . . . we have made tremendous strides to improve our great city.’’

Lantigua inherited a massive deficit that last year required a $35 million bailout from the state. In the past year, the city has reduced the number of police officers from 151 to 111, forcing the department to disband units such as the antigang squad.

Police officials said the budget cuts have resulted in serious crimes — such as robberies, assaults, rapes, and car thefts — rising 50 percent in the past year.

But the mayor said yesterday that there was little he could do without cooperation from unions.

“Let’s face it: We have seen deep cuts to our Police and Fire Department personnel,’’ he said. “My team remains committed to negotiating with our unions to restore these departments to previous staffing levels. However, without union concessions, we will be unable to reach this goal.’’

Lantigua said he has been able to reinstate nine police officers since last July, but he said those officers have had to serve in the patrol unit to maintain as much visibility in the community as possible.

“I will continue to advocate that every officer that we bring back be placed on [a] patrol until our staffing levels can support the deployment of special units and expanded administrative office duties,’’ he said.

To save money, Lantigua said he has required a review of all city expenses in excess of $1,000 and all overtime requests. He said that he has also reduced the number of vehicles city employees can take home, to save money on gas.

And he added that the city will save more than $4 million by moving all municipal and school employees to the state’s health insurance plan.

The mayor also said his administration has plans to improve the city’s schools, two of which have been designated as underperforming. One goal, he said, was to increase the drop-out age from age 16 to 18 years old.

Lantigua also spoke of a range of economic development projects, including the opening of several new businesses downtown, and improvements to streets and parks, including a $300,000 grant to spruce up the common across from City Hall. He said he has pleaded with those considering investing in Lawrence to avoid being distracted by the headlines about his purported corruption, which he called “lies and innuendo.’’

“There are some we are talking to who believe, not only am I honest, but that we’re doing the best we can for the city of Lawrence,’’ he said. “I’m saying that they’re not going away. . . . Some might be scared, but we’ll get them to come back.’’

The mayor’s speech did not persuade some critics who attended the council meeting, however.

“I didn’t hear anything new,’’ said the Rev. Edwin Rodriguez, a former pastor of El Faro Universal church who is leading the recall campaign.

“What he said is just repeating things he said before,’’ Rodriguez said. “He doesn’t present anything that we can see to make us feel we have a secure future.’’

Victor Hernandez, a resident who supports the mayor’s recall, added: “Sometimes the words sound great, but the action is different. We’re waiting for results, and we’re not seeing it in the crime and education in this city.’’

Many of Lantigua’s supporters insist he needs more time to succeed.

“The mayor was handed a mess, and he’s doing the best he can,’’ said Francis Cialek, a city worker who campaigned for Lantigua. “It takes time to straighten things out. This is very complicated, and given what he has to do, I think he’s doing a great job.’’

Herson Villa, another supporter who attended the speech in City Hall last night, added: “He’s doing his best to help people, especially those with little means. He needs more time.’’

As he closed, the mayor pleaded with the City Council to work with him and ignore the media attention he has received.

“I ask all of you to join me in refusing to allow distractions to take us off our daily course,’’ he said. “With your cooperation, we will enjoy a renewed sense of energy, passion, and desire to make . . . Lawrence truly great.’’