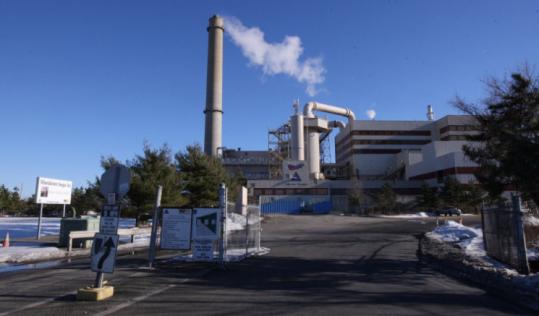 Wheelabrator Technologies was accused of improperly treating and disposing of ash at its Saugus facility. (Bill Greene/ Globe Staff/ File)
By Jenna Russell Globe Staff / May 3, 2011

Wheelabrator Technologies Inc., the operator of three municipal waste incinerators in Massachusetts, has agreed to pay $7.5 million to settle a state lawsuit alleging that it broke environmental laws, more than a year and a half after the complaints of employee whistleblowers triggered a state investigation of the incinerators.

In a statement released by her office yesterday, Attorney General Martha Coakley said that Wheelabrator violated the Clean Water Act and the Wetlands Protection Act by improperly disposing of contaminated sludge and waste water at its plants in Millbury and Saugus and that it violated the Hazardous Act by improperly treating and disposing of ash at its plants in Saugus and North Andover.

The total settlement was the largest ever for a state case arising from alleged environmental violations, said Kenneth Kimmell, commissioner of the state Department of Environmental Protection, which worked with the attorney general’s office on the case. The settlement included $4.5 million to address the charge that the New Hampshire-based company defrauded North Shore communities that paid it for safe waste disposal, $2 million in penalties for the alleged environmental violations themselves, and an additional $1 million for environmental protection and improvements, including projects around the Wheelabrator facilities.

Wheelabrator did not acknowledge any wrongdoing as part of the settlement and maintained in a statement that it did not harm the environment.

“We have maintained the highest commitment to environmental compliance in Massachusetts over three decades, and we do not concur with the Commonwealth’s assessment,’’ said a statement released by the company. “We have settled this matter to avoid years of costly litigation . . . No harm to the environment or to the health and safety of the public or our employees occurred.’’

The state’s investigation was triggered when one current and one former employee filed suit against Wheelabrator and its parent company, Texas-based Waste Management Inc. The suit was filed under the Massachusetts False Claims Act, the law that protects whistle-blowers who report their employers for committing fraud against the government and was filed in Essex Superior Court on behalf of the 15 North Shore towns and cities that contract with Wheelabrator. It was sealed by the court to keep it from public view while the state investigated.

Under the terms of the state’s whistle-blower law, which dictates that employee whistle-blowers receive 15 to 25 percent of the funds the state recovers with their help, the two employees who raised the first concerns about pollution at the plants, plus a third who joined them later, will share a $1 million reward. Their share is based on the $4.5 million portion of the settlement that stemmed directly from the false claims suit they initiated.

Attempts to reach the employees were unsuccessful yesterday. The Globe previously obtained the names of the whistle-blowers, but has not identified them.

The case illustrates the importance of whistle-blowers in helping the state to police corporations, especially in times of shrinking government resources, Coakley said in an interview.

“Many of the environmental matters we deal with are not easy to analyze and get information for,’’ she said. “Obviously, an oil spill is immediately obvious, but others aren’t so immediately obvious, even to those who do inspections. . . . We do depend on someone who works in a plant and knows what it’s supposed to be doing and when it’s not doing it, and the whistle-blower law is designed to encourage them to come forward.’’

Kimmell, the DEP commissioner, said that his department has not cut back the frequency of its inspections and that he is not concerned that his inspectors may have missed problems at the Wheelabrator plants, because the alleged problems arose after the state’s last inspection of the facilities. But as a result of the case, he said he has directed his staff to review the inspection schedule for facilities with potential risk to public health, to ensure that the oversight is adequate.

“It doesn’t raise a red flag, but we have lost a lot of people, and we do have to be careful where we target resources,’’ he said. “We will take a closer look.’’

As part of the announcement, state environmental officials said inspections of the plants within the last month found no current threat to public health or the environment, and found changes in procedures had been made to comply with state law.

The announcement also stipulates that the company must pay for an independent environmental auditor to monitor its compliance with environmental regulations and will be subject to unannounced inspections by the auditor for the next three years.

In the communities surrounding the incinerators, where some residents have voiced concern about their environmental safety for decades, the company’s failure to acknowledge any harm was seen as frustrating and worrisome.

“A $7.5 million settlement does not answer the question about how the public health and the local environment have been affected in the short and the long term,’’ Peter Manoogian, a Saugus Town Meeting member and longtime Wheelabrator critic, wrote in an e-mail. “I am hopeful that the Saugus Board of Selectmen and the Saugus Board of Health will vigorously pursue this matter, as I believe it is their right and obligation to do.’’

Waste Management Inc., based in Houston, is the largest recycler and landfill operator in North America and also handles trash pickup in municipalities around the country.

Wheelabrator Technologies Inc., a wholly owned subsidiary based in Hampton, N.H., operates energy-producing incineration plants around the country, including the three municipal incinerators in Saugus, North Andover, and Millbury, each of which can process 1,500 tons of waste per day.

At the Saugus plant, the state alleges, a broken filter allowed 8,000 gallons of ash sludge to spill into the parking lot and nearby wetlands in September 2009, Wheelabrator failed to notify the state in a timely fashion as required by law, and the company then excavated wetlands without state permission. The state lawsuit also alleges that a hole in the roof at the Saugus facility allowed ash to be emitted into the atmosphere and that tanks of waste water were emptied into the plant’s parking lot and surrounding wetlands.

A hole in the roof of the North Andover plant also released ash, the state says, and other ash was transported to landfills without being treated. At a landfill in Shrewsbury used by the Millbury plant, ash was dumped on ice that collapsed, according to the state, allowing 15,000 gallons of ash-contaminated water and ash waste to wash into a brook and nearby wetlands.

The director of the Saugus River Watershed Council called the alleged violations appalling and applauded the efforts of state officials.

“Thanks to their diligence, violations that threaten public health and our precious environmental resources have been identified and called to a halt,’’ Joan LeBlanc said in a statement.

The watershed council is charged with protecting an area including Rumney Marsh, a 2,600-acre salt marsh near the Saugus incinerator.