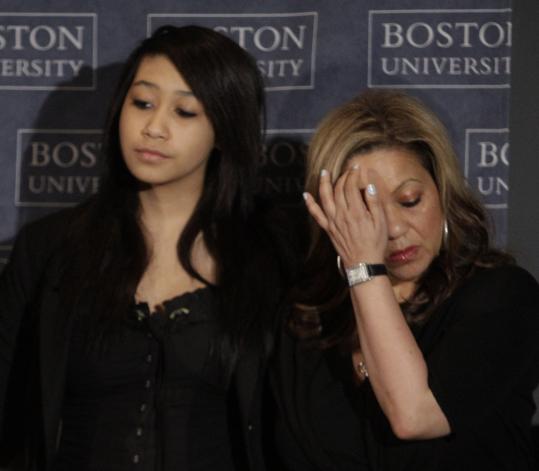 Alicia Duerson, wife of Dave Duerson, and their daughter, Taylor, attended an announcement at the Boston University Center for the Study of Traumatic Encephalopathy. (Stephan Savoia/ Associated Press)
By Chelsea Conaboy Globe Staff / May 3, 2011

Dave Duerson suspected brain damage. When the 50-year-old former safety shot himself in the chest in February, he left a note asking that his brain be studied.

Boston researchers yesterday confirmed what Duerson knew. Dr. Ann McKee, a director of the Boston University Center for the Study of Traumatic Encephalopathy, said Duerson had a moderately advanced case of the degenerative disease caused by repeated head trauma.

Duerson brings to 15 the number of deceased National Football League players studied by the center for signs of chronic traumatic encephalopathy. All but one were confirmed to have had the disease, identifiable by the buildup of an abnormal protein in the brain. The center’s work has helped raised awareness of the long-term harm that can be caused by concussions and other brain injuries from professional, collegiate, and even youth sports.

With so few examples of the encephalopathy and so little known about it, every case matters, said Robert Stern, an associate professor of neurology at Boston University and a director at the center. But Duerson was unique among them, he said.

“This is the first time that anyone really felt ahead of time that they had this disease,’’ Stern said.

McKee assessed Duerson’s brain, finding a protein called tau in the areas that control impulse, mood, and behavior. Stern talked with Duerson’s friends and family and examined medical records. He said Duerson began having symptoms about five years ago.

Duerson, who also played for the and the Phoenix Cardinals and retired from the NFL in 1993, had become a successful businessman. But in recent years his life unraveled.

He lost his food service business to bankruptcy and his home to foreclosure.

He complained of trouble remembering things, and he struggled with a short fuse. In 2006, he pleaded guilty to a misdemeanor charge after pushing his wife, Alicia, during an argument. They divorced in 2008.

Starting as a boy, Duerson had played football for 24 seasons. Researchers said yesterday that he had at least 10 concussions during his professional years alone, including several from hits that knocked him unconscious.

“Through their efforts and God’s grace we have been given the gift of closure,’’ he said. “It is our hope that, through this research, questions that go beyond our interests may be answered, questions that lead to a safer game of football, from professional to Pop Warner.’’

Last spring, the NFL gave $1 million to the center, which is a partnership with the Bedford VA Medical Center and also examines the brains of veterans. The league issued a statement yesterday saying it will continue to support the center and “ensure that concussions are properly treated in the NFL.’’

It has tried in recent years to address growing concerns about head trauma by tightening rules to limit hits to the head and neck.

Many states, including Massachusetts, have enacted laws preventing young athletes from returning to a game after they are knocked unconscious unless they have clearance from a doctor. The scientists said yesterday that more should be done.

Chris Nowinski — also a leader at the center and president of the Sports Legacy Institute, a nonprofit that works to prevent brain trauma in athletes — said coaches and parents enforce pitch limits in youth baseball to protect elbow ligaments. They should give as much attention to protecting children’s brains in football, he said.

Nowinski said players and coaches need more preseason education. Coaches should also limit hitting during practice, when more than half of hits to the head for young players occur, he said.

Chelsea Conaboy can be reached at cconaboy@boston.com.