Immigration officials release her to care for son while case decided 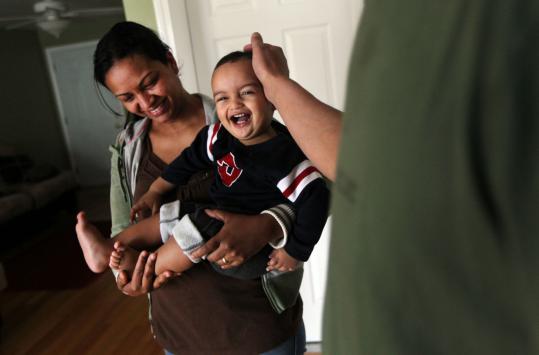 REVERE — A Brazilian mother in the country illegally says she was detained for seven days by federal immigration officials after a traffic stop in Reading last week, despite her pleas that she be allowed to breast-feed her 13-month-old son.

“I told them, many times, that I needed to be with my son to breast-feed, but they didn’t listen to me,’’ Katia Cynara Borges said yesterday after she was freed from the Suffolk County House of Corrections. She was released following numerous inquiries this week by Globe reporters to Immigration and Customs Enforcement officials.

In a brief statement yesterday, the agency said: “After further review, ICE determined that the detention of this individual was not consistent with agency policy on the detention of breast-feeding mothers. As a result, ICE released the individual today while she awaits the outcome of her case.’’

Borges’s detention runs counter to guidelines that the agency revamped after a raid it carried out in 2007 at a New Bedford factory drew widespread criticism. Hundreds of illegal immigrants who worked there, many of whom were either nursing mothers or primary caregivers of children or elderly relatives, were detained after the raid.

The guidelines now stipulate that “extraordinary circumstances’’ should exist, such as the protection of national security or public safety, to warrant detention of such individuals.

Speaking in Portuguese, Borges said that aside from her status as an illegal immigrant with an overdue deportation order, she has never been arrested. She came to the United States in 2006 and was arrested the same year and ordered deported.

Borges, 31, lives with her husband and their son, Pedro, in a modest duplex in Revere. She cleans houses, and her 34-year-old husband, who requested that his name not be published because he fears deportation, works in construction. He took time off from his job to care for their son after Borges’s arrest April 21.

Yesterday, his eyes filled with tears after Borges called him to say she was being released.

When Borges walked through the front door about 3:30 p.m., he kissed her, hugged her, and then placed Pedro in her outstretched arms. The boy laughed as she gave him a tight embrace.

Borges said that during her stay in jail, she requested and was given Motrin to alleviate pain associated with the interruption of nursing. While Pedro’s diet also consisted of solid foods in past months, Borges said she has continued to nurse him because she believes in the benefits of mother’s milk.

Jessica Vaughan, director of policy studies for the Center for Immigration Studies in Washington and an opponent of illegal immigration, said that in these cases, authorities are put in the predicament of trying to ascertain whether detainees are telling the truth or just exploiting the new guidelines.

“But nevertheless, her not abiding by the deportation order makes her a fugitive, and that escalates her legal difficulties,’’ said Vaughan, whose office is in Franklin. “Because she was a fugitive, I suspect that ICE had to detain her because she was a high flight risk.’’

Heloisa Maria Galvao, executive director of the Brazilian Women’s Group in Allston, said she has not heard of any cases similar to Borges’s since the raid on the New Bedford factory.

“It’s really frustrating to hear this one, because we have worked so hard since then to prevent it from happening,’’ she said.

Galvao said she called Borges’s husband and told him that her group would work to help them find legal assistance, and he welcomed the offer.

Borges and her husband, who are from Belo Horizonte in the state of Minas Gerais, plan to hire a lawyer in an attempt to become legal US residents. Borges is scheduled for a status hearing Oct. 21. She is required to wear an ankle monitor pending a decision on her case.

Correspondent Miriam Valverde contributed to this report. Brian R. Ballou can be reached at bballou@globe.com.