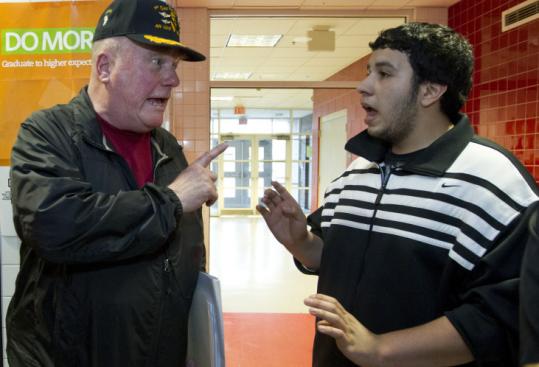 CHELSEA — Critics of a program that will allow federal authorities to check the immigration status of all criminal suspects in Massachusetts clashed here last night with a smaller number of supporters of the initiative.

The program, called Secure Communities, is active on a pilot basis in Boston and is scheduled to be implemented nationwide in 2013. Under the program, fingerprints of all suspects arrested in the state will be sent to the US Bureau of Immigration and Customs Enforcement. Detainees could face deportation if they are in the United States illegally.

But more than 200 activists blasted the program last night at a forum hosted by Governor Deval Patrick’s administration at Chelsea High School, saying it will result in the deportation of immigrants who do not have violent criminal records, among other pitfalls.

“It’s unfair,’’ Franklin Peralta, 33, of Jamaica Plain said before the meeting. “There are laws in place already to deport serious criminals. This is deporting innocent people.’’

But Christen Varley, president of the Greater Boston Tea Party, said the program targets dangerous felons, which critics are not acknowledging.

“These people here today don’t understand the distinction’’ between the targeted felons and the rest of the immigrant population, she said. “It’s not in their interest to have criminals running around either.’’

The Patrick administration has held a series of meetings in communities around the state to discuss the program. Passions ran high in the lobby of the school before last night’s meeting, as opponents chanted slogans including, “Hey, hey, ho, ho, deportation has got to go,’’ and held signs protesting the program.

The mood during the meeting was equally charged, as spectators repeatedly booed when Mary Beth Heffernan, the state’s public safety secretary, and Curtis Wood, another state public safety official, discussed the program.

Tempers flared during the public comment period when supporters and opponents traded barbs and shouted each other down. The topic is especially poignant in Chelsea, which is a sanctuary city, meaning local authorities cannot ask residents about their immigration status.

Robert Cappucci, 40, of Medford said he backs Secure Communities and said of the illegal immigrants living in the country, “all 12 million of them are criminals.’’

“My best friend died eight years ago because illegal immigrants brought illegal drugs into this country,’’ he said, prompting a round of boos and catcalls. “The law must be obeyed.’’

The boos turned to cheers moments later when Lyn Meza, 65, of Chelsea said the program will harm cities and towns in the state. “It’s an attack on our community,’’ she shouted into the microphone.

Heffernan said that law enforcement officials around the state have acknowledged that profiling is a problem and that training programs have been launched to combat the issue.

Gladys Vega — executive director of the Chelsea Collaborative, which advocates for immigrant rights — said Secure Communities will lead to profiling, mistrust of local police, and less crime being reported. “Governor Patrick should opt out’’ of the program, she said before the meeting. A program like this, she added, will take local police cooperation a step backward.